Explore this California Map to know everything you want to know. Learn about the location of this state in the United States of America. Check out its geography, time zones,… 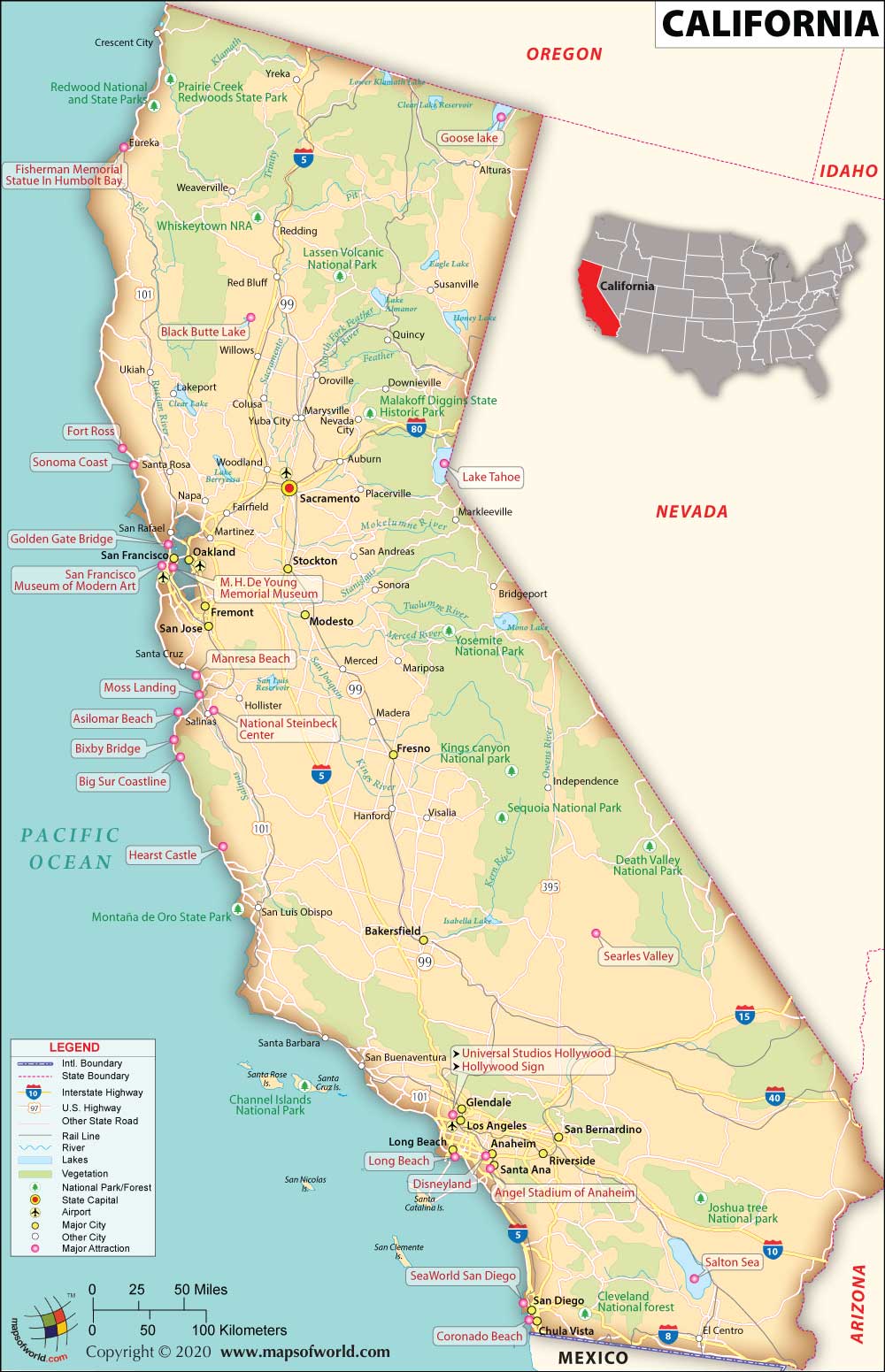 Explore this California Map to know everything you want to know. Learn about the location of this state in the United States of America. Check out its geography, time zones, history, major cities, national parks, trails, flag, capital, and many more.

California is the 31st state of the United States, which was admitted to the union on September 9, 1850. Sacramento is California’s capital city. While Los Angeles is the largest city in California, Greater Los Angeles is the largest metro/urban area. English and Spanish are the major spoken languages. In the US, California is the most populous state. While Golden State is its nickname, “Eureka” is the State Motto. Learn more about this US state from Facts of California.

California’s state flag has a white background with a red stripe spanning along the fly’s length. At the center of the flag, it features a brown grizzly bear that is walking on a green grass patch. “California Republic” is inscribed below the bear. You’ll find a five-pointed red star at the upper left corner of the flag.

The flag originated in 1846 with the Bear Flag Revolt against Mexico. Peter Storm and William L. Todd designed the bear flags at that time. However, in 1906, the Bear Flag of Todd was destroyed during an earthquake. That’s when a new version was created. On February 3, 1911, California officially adopted this state map. On the basis of a watercolor painting of a bear by painter Charles Christian Nahl, the California flag was standardized in 1953.

In 1849, the California state Constitutional Convention adopted the “Great Seal of the State of California.” Though minor changes were made over time, the design was finally standardized in 1937.

The Great Seal of the State of California consists of Athena (of Greek mythology) or Roman Goddess Minerva overseeing the works of a miner. A bear (the state animal of California) stands at the feet of the Roman goddess of wisdom, Minerva. The seal also shows Nevada mountains in the background along with ships plying in the river below the mountain.

“Eureka” is written at the top of the image, in the portion that shows the sky over the mountains. This is a Greek word that means “I have found it.” It refers to the gold discovery in the state, which led to the flourishing economy of California. The seal also shows a pan and a rocker near the gold miner. The pan was used by the gold miners to find gold from the dirt. The rocker is a larger-sized pan that helps miners to find more gold from dirt faster.

“The Great Seal of the State of California” and “California” are written over a yellow-colored ring surrounding the image (described above in the seal). Learn more about the state from California Facts and Symbols.

The early history of California dates back to 10,000 years back. This Native American history continued till 1542. The latter part can be divided into 4 parts:

During the American Civil War, California has seen multiple wars. Some of the major ones are:

California became the 31st state of being admitted to the Union on September 9, 1850.

California Location Map shows the exact location of the US state of California on the US map. It also shows the boundaries of different states in the US, neighboring countries, and oceans all around.

The state of California is situated in the western region of the US. It shares its border with Oregon (to the north), Arizona and Nevada (to the east), Baja California of the Mexican state (to the south), and the Pacific Ocean (to the west).

California has a diverse geographical landscape. It can be predominantly divided into two regions:

The Sacramento-San Joaquin River Delta is very important for California because it supplies adequate water to the state. This delta divides the valley into two portions:

Off the Southern coast, you’ll find the Channel Islands. To San Francisco’s west, the Farallon Islands is located. Mount Whitney has a height of 4,421 m (14,505 feet). This mountain in the Sierra Nevada is the highest peak in the 48 contiguous US states.

Forests cover 45% of California’s total surface area. This state boasts of having the most diverse species of pine in the United States. A large inland salt lake known as the Salton Sea is located in the southern part. Mojave desert is situated in the south-central region. The Death Valley is situated in Mojave’s northeast.

Know about the location of mountain peaks, rivers, lakes, the state capital, state boundary, ocean, and neighboring states on this Physical Map of California.

The US State of California has 36 area codes. Some of the most important area codes associated with major cities are 650 (Silicon Valley’s South San Francisco Bay area), 310 (Los Angeles), 818 (Hollywood), 626 (Pasadena), and 415 (San Francisco), and many more. The California Area Code Map helps you locate a particular area code and also shows the area code boundary, county and state boundaries, and state capital.

California cities map helps you learn about the state’s major cities and locations. It also showcases the state capital, state boundary, other cities, neighboring oceans, and many more.

In California, you can enjoy 349 recreational trails (hiking, backpacking, mountain biking, and other adventurous trails). They cover around 2,199 miles of trails in California. Some of the most popular ones are Yosemite Falls Trail, Mount Shasta Trail, McWay Waterfall Trail, Sea Lion Point Trail in Point Lobos, etc. Check out the locations of different national parks, monuments, preserves, and more details in the National Parks in California Map.

You’ll find a Mediterranean-like climate in California. While the summers are warm and dry, the winters remain wet. The daily high temperature in a day remains around 70 °F (21.1 °C). On the hottest days of summer, the temperature can go up to 80 °F (26.7 °C). Even in the winter season, you’ll hardly experience freezing temperatures. The best time to visit California is from June to August. The most beautiful time to visit California is from March to May. Wildflowers and lush green grass cover the hillsides during this time. If you are a ski adventurer, visit the mountainous regions of California from November to March.

FAQ #1: How Big is California?

FAQ #2: What is the Capital of California?

Ans: Sacramento is the capital of California.

FAQ #3: How Many People Live in California?

FAQ #4: When Did California become a State?

Ans: California became a state on September 9, 1850. It is the 31st state admitted to the union.

FAQ #6: Does it Snow in California?

Ans: In some regions, especially in the mountainous regions (such as Big Bear Lake and Sierra Nevada Mountain Ranges) of California, you can experience snow in winter.

FAQ #7: How Far is Hawaii From California?

FAQ #8: How Much is Tax In California?

FAQ #9: What is California Known For?

FAQ #10: Who is The Governor Of California?

Ans: Democratic party Gavin Newsom is the incumbent governor of California. He assumed office on January 7, 2019.