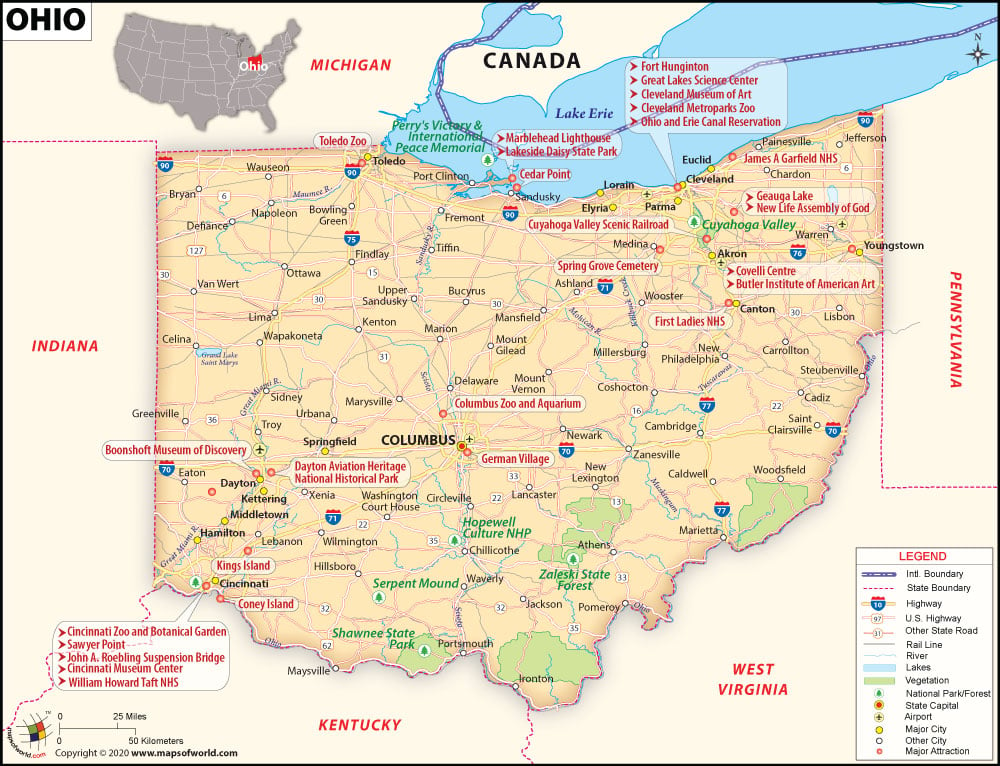 The official flag of Ohio has five alternating stripes of red and white colors. There is a chevron of azure that has an “O” of white and red colors and 17 white stars. It is also the only non-rectangular flag in the country.

Also known as the ‘Buckeye State,’ Ohio was the 17th State to join the Union on March 1st, 1803. The name of the state is derived from an Iroquois word ‘Ohi-Yo,’ which translates to Great River or Large Creek. The people of Ohio are also known as Buckeyes, as the state has buckeye trees in abundance. The capital of Ohio and the largest city in the state is Columbus, while the largest metros in the state are Cleveland and Cincinnati.

Archaeological evidence shows that people have been living in the regions of Ohio since 13,000 BC. Between 1000 BC to 800 BC, there were semi-permanent villages set up across the Ohio Valley. In 1650, the Iroquois Indians lived in the areas between the Ohio River and Great Lake.

The region was claimed by the French in the 18th century, who set up trading posts in the region, for the purpose of controlling the fur trade industry that was booming in the region. After the French and Indian War in 1754, British colonial possession followed. By the end of the American Revolution, the British conceded their control of the region to the growing United States.

Ohio was then included in the great Northwest Territory. The region eventually received statehood status on March 1st, 1803, but it was never formally declared. It wasn’t until 1953 that President Dwight Eisenhower officially signed the original documents that the formal declaration was made.

Ohio is located in the Midwest region of the United States. The state is bordered by Ontario, Canada to the north, Michigan to the northwest, Pennsylvania to the east, Indiana to the west, Kentucky to the south, and Virginia to the southeast.

The Ohio River defines the state’s southern border, while much of the northern border is defined by Lake Erie. The state features glaciated plains and low mountain peaks. The tallest peak of Ohio is Campbell Hill at 1,539 feet.

There is a total of 88 counties in Ohio. The biggest counties in Ohio are Ashtabula County, Ross County, Licking County, Muskingum County, and Washington County. Check this Ohio County Map which locates all the counties of Ohio on the Ohio Map.

Ohio is a treasure chest full of small boxes, each having a hidden delight waiting to be experienced. Allowing a four-season outdoor experience, the state greets travellers with proud Midwest culture. The ‘Buckeye State’ opens up your senses from the fern-filled valleys to the Appalachian foothills.

Comprising of 16 roller coasters and 72 rides, Cedar Point in Sandusky, is one of the most popular amusement parks in the US. The Rock and Roll Hall of Fame in Cleveland is a pilgrimage site for many music enthusiasts, featuring exhibits and collections of the most influential musicians of all time. The Columbus Zoo and Aquarium houses over 7,000 animals representing over 800 species.