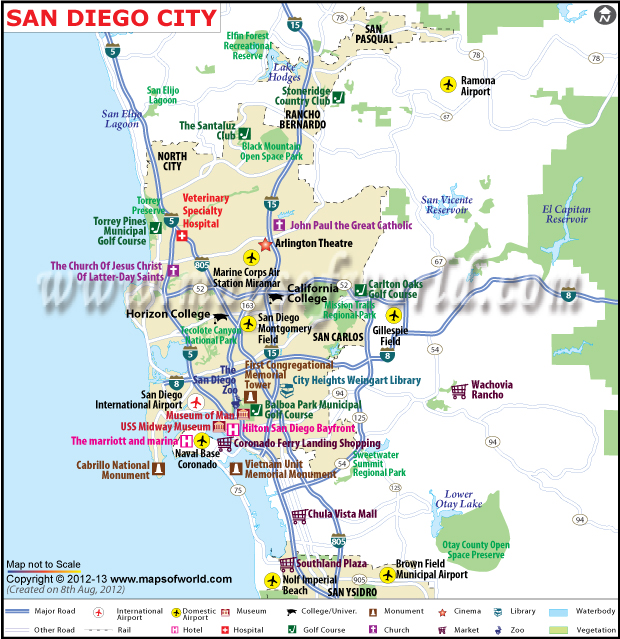 The city of San Diego, on the Pacific Coast in South California, is located not far from the Mexican border. It is the administrative center of San Diego County. In terms of area, it is the second largest city in California and the eighth largest city in the United States of America. Originally inhabited by the Kumeyaay people, San Diego saw the first arrival of Europeans in the 16th century. The city as we know today was founded in 1769 and incorporated on March 27, 1850. Today, San Diego is known for its thriving economy that focuses on manufacturing, tourism, military and defense related business. It is also fast emerging as a prominent center for biotechnological research.

Which is the best season to visit San Diego?

San Diego has a fine climate throughout the year. So it does not have any off season as such. This city sees the highest tourist influx in July and August; visitors planning a trip in these months would be well advisable to book their stay at a hotel well in advance. San Diego has a mild winter and November to January again sees a lot of tourist activity.

Airport and Public Transport in San Diego
San Diego is served by the San Diego International Airport (SAN) which is the busiest single-runway airport in the country. The city also has a well connected network of buses, and trains. Cycling is also a very popular means of transportation and if you like to walk, then go right ahead - San Diego has been ranked 18th among 50 most walkable big cities in the United States.

San Diego is a popular tourist destination and there is no dearth of hotels that suit every budget. Some popular budget hotels are La Pensione Hotel, Pacific Inns and Suites, Loma Lodge, Old Town Inn and Catamaran Resort Hotel. If you are looking for a luxurious stay in the city then Hotel Del Coronado, US Grant Hotel, Westgate Hotel, The Keating Hotel and Manchester Grand Hyatt San Diego are some of the best options available. You can also opt for some B&Bs like Keating House Inn, Little Italy Inn and The Bed and Breakfast Inn at La Jolla.

Things to do in San Diego

Visit Museums
There are a number of museums in San Diego that are of tourist interest. Art lovers flock to the San Diego Museum of Art that boasts of a large collection of paintings including those by Spanish artists. The Museum of Photographic Arts is one of the three museums in the United States that focuses primarily on preservation of photography, video, and film. A visit of the famous Museum of Man would enlighten you about the ancient Mayan and Egyptian civilization as well as the history of Native Americans. If you are interested in the maritime history of the United States, then visit the Maritime Museum of San Diego, which houses memorabilia from a number of historic American sea vessels and the USS Midway Museum which was once the aircraft carrier Midway. Other important museums in San Diego are the San Diego Natural History Museum and the Museum of Contemporary Art San Diego.

Picnic at the Parks and Zoo
The Old Town San Diego State Historic Park tells the story of the early years of the city of San Diego and has a number of 19th century buildings that bear testimony to the era gone by. The Balboa Park named after the famed Spanish explorer Vasco Nunez de Balboa is another important tourist site. This park has many museums, theater, gardens, and walking paths. The San Diego Zoo is located inside the Balboa Park. It is home to as many as 3,700 animals and is one of the few zoos in the world to have a giant Panda as an inmate. The San Diego Zoo Safari Park is also quite popular among visitors. It houses a large number of endangered species and runs the successful California condor breeding program. A visit to San Diego is incomplete without a visit to the San Diego SeaWorld which is not only a famous animal theme park but a marine mammal park and oceanarium as well.

Entertainment Options
The entertainment scene in San Diego is pretty colorful. The San Diego Symphony at Symphony Towers and the San Diego Opera at Civic Center Plaza are quite popular, the latter being adjudged one of the top ten operas in the country. If you want to enjoy a play go to the Old Globe Theater that produces as many as 15 plays in a year. If you are in mood for some jazz or rock music, then visit the numerous outdoor venues or night clubs and listen to your favorite songs.

San Diego plays host to a number of festivals all round the year like Mardi gras, Halloween, or Cinco de Mayo which are immensely enjoyed by tourists. If you are a movie buffs, San Diego would give you a taste of the best films around the globe through the various film festivals that are organized here.

Where to eat in San Diego

San Diego's passion for beer is well known. Share this passion and enjoy a drink in any of the numerous bars and brewpubs of San Diego.

Where to shop in San Diego
San Diego has a number of malls that cater to everyone's taste. Some popular malls are Fashion Valley in Mission Valley, Westfield UTC in La Jolla, Mission Valley Westfield in Mission Valley, Otay Ranch Town Center in Chula Vista and Westfield Horton Plaza in Downtown San Diego. Mix shopping with fun and visit the Gross Mont Center in La Mesa, a place frequented by San Diego University students. If you are looking for antiques, then North Avenue is the right place for you.