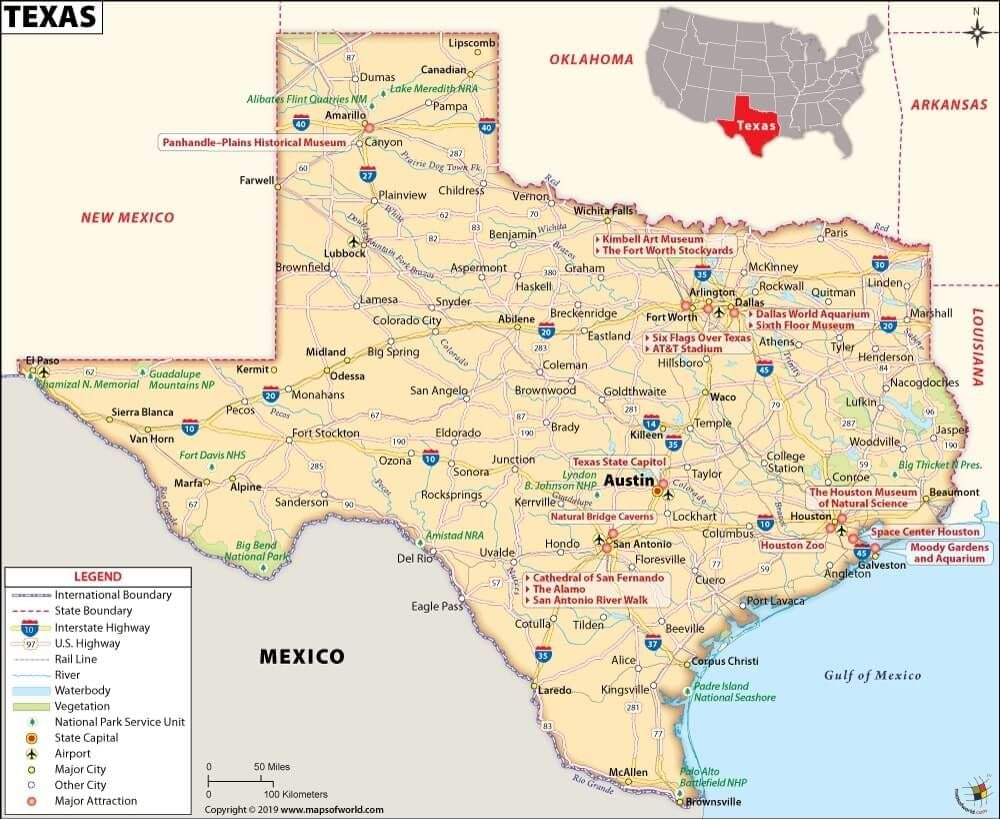 The official flag of Texas is also known as the ‘Lone Star Flag’ and was adopted on January 25th, 1839 as the final national flag of the Republic of Texas.

The second-largest state in the US, Arizona is home to five international airports, located near the major cities of Lubbock, El Paso, Dallas, Houston, and Austin. The state capital, Austin, is also called the ‘Live Music Capital of the World’, with its seemingly endless live music venues and gigs. Houston, the most populous city in Texas, is home to the Johnson Space Center.

Steeped in cowboy lore, the state of Texas is many people’s true image of America. From the small-town rodeo heritage and family barbecues to the live music festivals and high school football games, Texas is a happening place. Saddle up, and take a ride to Texas, where everything is bigger.

Archaeologists have discovered that three major indigenous cultures inhabited this territory before European settlers arrived in the 16th century. They were the Pueblo, the Mississippi culture, and the culture of Mesoamerica.

The term ‘six flags over Texas,’ refers to the fact that six nations have claimed sovereignty over the state at various points in history. These states are Spain, France, Mexico, the United States, the Republic of Texas, and the Confederate States of America. In 1845, Texas was annexed by the US as its 28th state.

Texas State has a total of 254 counties. The biggest county in Texas is Brewster County and the smallest is Rockwall County. Check this Texas County Map which locates all the counties of Texas on the map.

Texas is situated in the south-central region of the United States. ‘The Lone Star State,’ shares an international border with Mexico to the south and the US states of New Mexico, Oklahoma, Arkansas, and Louisiana. To the southeast lies the Gulf of Mexico. From northern panhandles to southern coastal plains, its total area is 268,820 square miles which is the largest in the contiguous US.

There are different national parks and other national sites located in the state of Texas. Fort Davis National Historic Site is famous for the Buffalo Soldiers (all-black regiments) who were stationed at Fort Davis from 1867 to 1885. Big Thicket National Preserve is another important site, with a rare reserve of flatland palmetto hardwoods, Savannah, floodplain forests, mixed hardwood, and pine forests. Check this National Parks in Texas Map locating all the national parks in the US.

The San Antonio Missions National Historical Park, (Better known as The Alamo) the site of the Battle of the Alamo, is a UNESCO World Heritage Site. The Guadalupe Mountains National Park, Big Bend National Park, Padre Island, and Caddo Lake allow an abundance of outdoor thrills. Other tourist attractions such as amusement parks, water parks, museums, and aquariums entertain all age groups.

The University of Texas at Austin and Texas A&M University are two widely recognizable institutions in the state. The state’s governing body of education ranks 36 public universities into three tiers. The state has as many as 1,000 public school districts.  Know more here.