What are the Ten Most Unique Buildings in the USA? - Answers 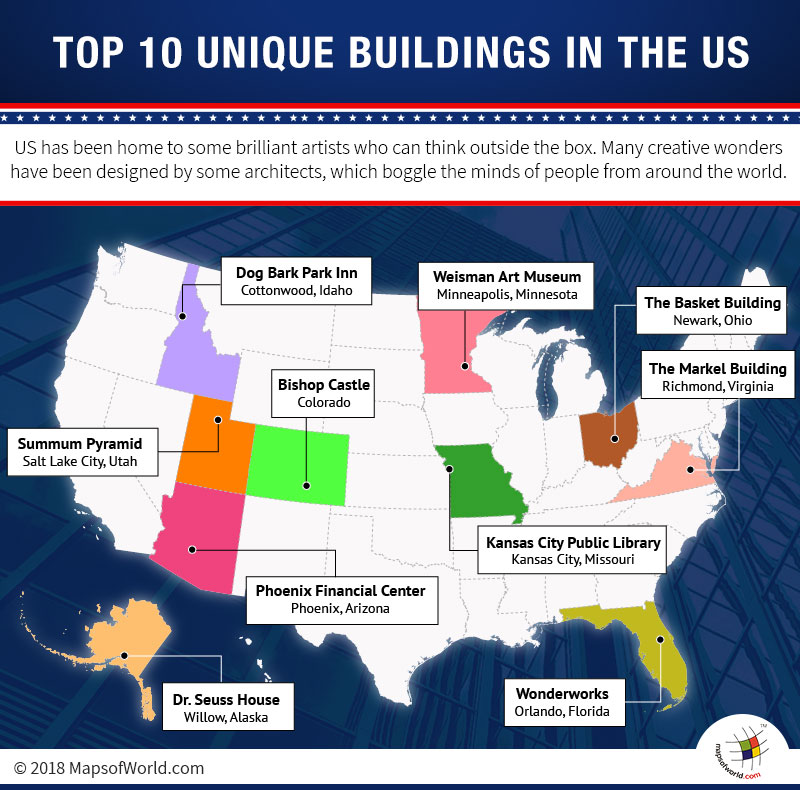 The architecture of USA is a lot more than the towering skyscrapers and high-rise apartments. The US is home to some brilliant artists who can think outside the box. Many creative wonders have been designed by architects in the US, and we bring you some most unique structures: 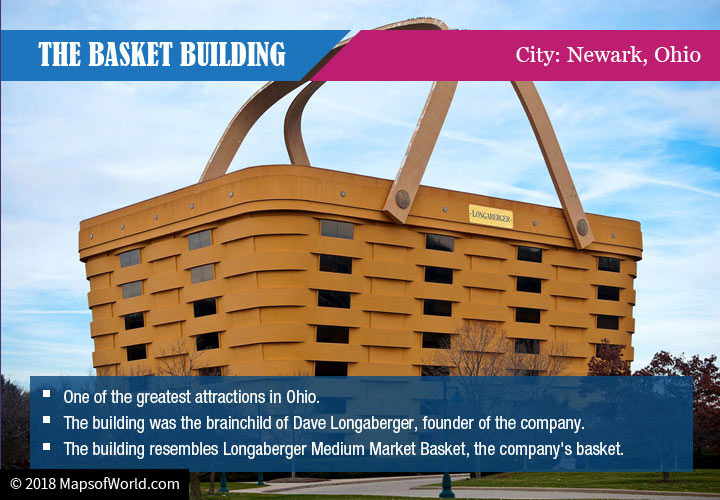 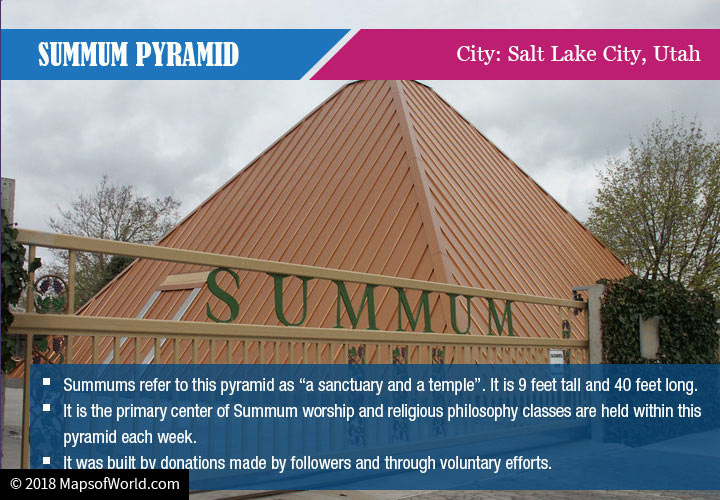 The Summum Pyramid is referred to as a ‘sanctuary and a temple’ by those who belong to the Summum religion. At 30 feet tall and 40 feet long, the pyramid is the primary center of Summum worship and religious philosophy classes held in this pyramid each week. It was built between 1977 and 1979 primarily from donations coming from the followers and through voluntary efforts. The Summum faith combines the practices of ancient Egypt and the Old Testament. Not surprisingly, the Summum Pyramid was constructed on precise geometrical designs derived from the era. The use of crystals is believed to energize the pyramid and lend strength to its initiation chamber. 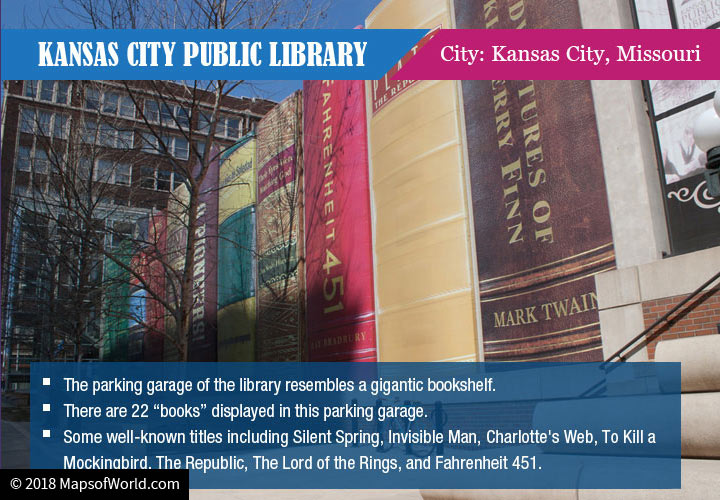 If you thought libraries are boring places, think again, the Kansas City Public Library’s parking garage is built to resemble one gigantic bookshelf. The 22 ‘books’ on display in this parking garage facade come complete with 25-foot-tall, 9-foot wide signboard rendering, and include some well-known titles such as; Silent Spring, The Invisible Man, Charlotte’s Web, To Kill a Mockingbird, The Republic, The Lord of the Rings, and Fahrenheit 451. The garage behind this giant bookshelf was constructed in 2006. The local community was asked to help plan out a beautiful new structure and this idea of the bookshelf came up. The community also voted to finalize the 22 titles that have been put up on this facade. 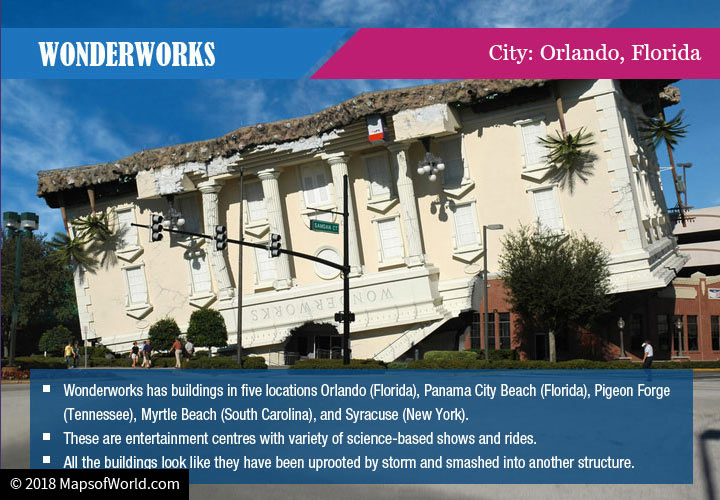 The Wonderworks Museum is an entertainment center with various science-based shows and rides that are designed to thrill and entertain at the same time. Wonderworks has five locations – Orlando (Florida), Panama City Beach (Florida), Pigeon Forge (Tennessee), Myrtle Beach (South Carolina), and Syracuse (New York). Each of these is housed in a building that is designed to look like it has been uprooted by a storm and smashed into another structure on the site. The first of these to open was in Orlando, Florida, in March 1998. 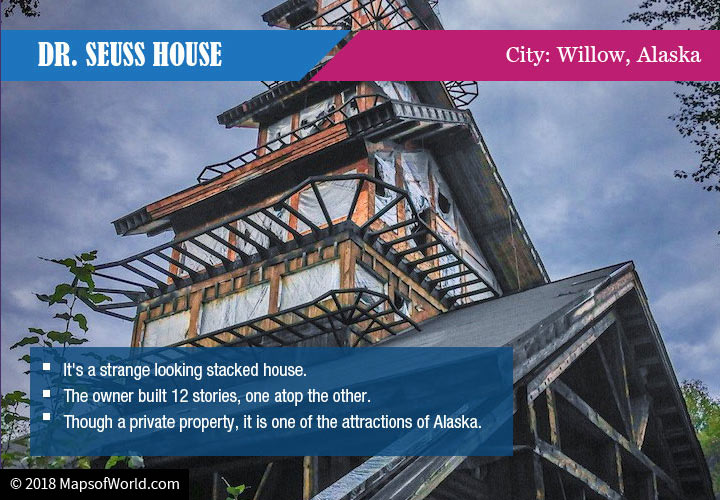 Often referred to as ‘America’s most whimsical home,’ the Dr. Seuss House of Willow in Alaska is a strange looking stacked house. The owner built 12 stories one atop the other in his attempt to see the mountain peak (Denali) as the surrounding trees grew taller. Though currently abandoned, it is private property and is a popular attraction in Alaska. The Dr. Seuss House, thus named for the owner’s imagination, is located somewhere between Willow and Talkeetna. The original owner, Phillip Weidner, worked on this 185 feet wonder for 10 years. After that, it remained abandoned for nearly 10 years. 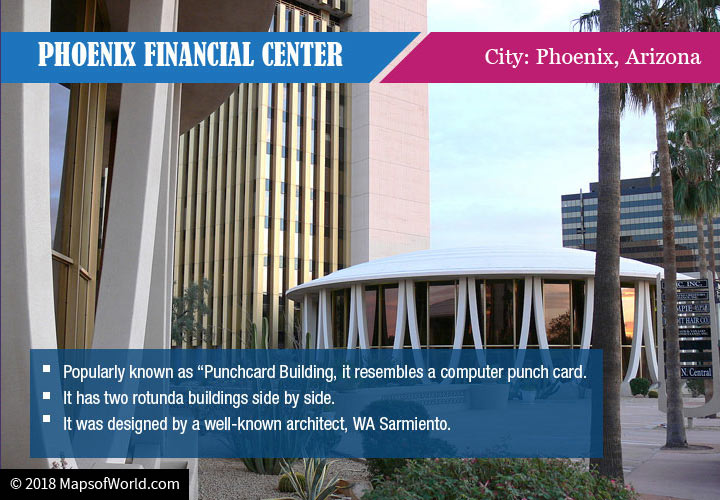 A financial center designed to look like a computer punch card – this is perhaps why the Phoenix Financial Center of Phoenix City is called ‘Punchcard Building.’ Apart from the high-rise, the financial center has two rotunda buildings side by side. The complex was completed and dedicated in 1964. In 1972, nine floors were added to the existing 10 storied main tower. This iconic Phoenix building was designed by Wenceslaus Sarmiento, a well-known architect. 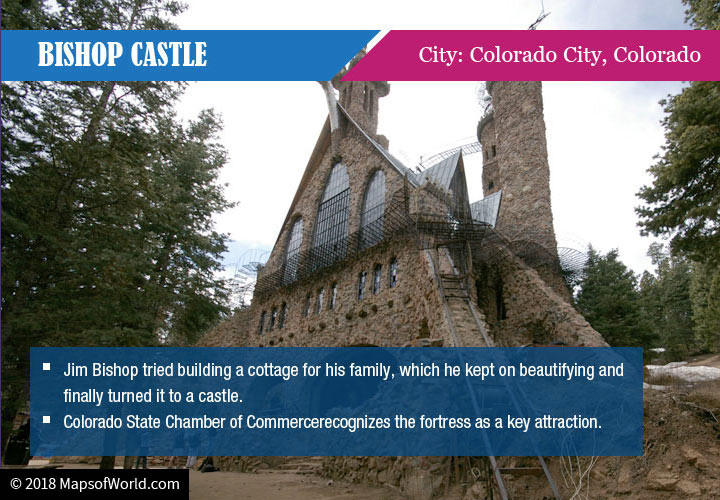 Bishop Castle in central Colorado has been described by RoadsideAmerica as ‘one man’s massive-obsessive labor of medieval fantasy construction.’ One look at this strange looking structure is enough to explain the statement. Jim Bishop acquired the land and started building his family a cottage in 1969. He used stones from the nearby forests. Soon the building started to take the shape of a castle and Bishop worked on it obsessively, for about 40 years. 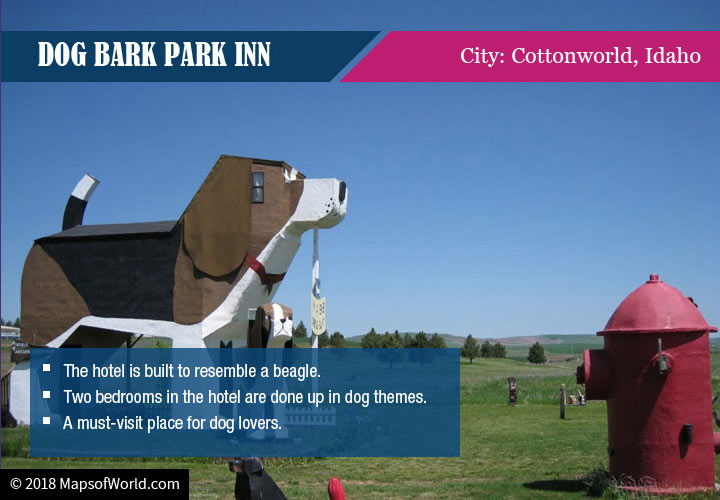 The Dog Bark Park Inn is a hotel that opened in Cottonwood, Idaho in 2003. Ordinarily, it wouldn’t have been worthy of notice except for the fact that the hotel is built to resemble a beagle. The two bedrooms of the hotel are also done up in dog themes and it is now a famous landmark. The ‘dog’ has also been named Sweet Willy by the residents of Cottonwood. The 30-foot Dog Bark Park Inn is owned by Dennis Sullivan and Frances Conklin. 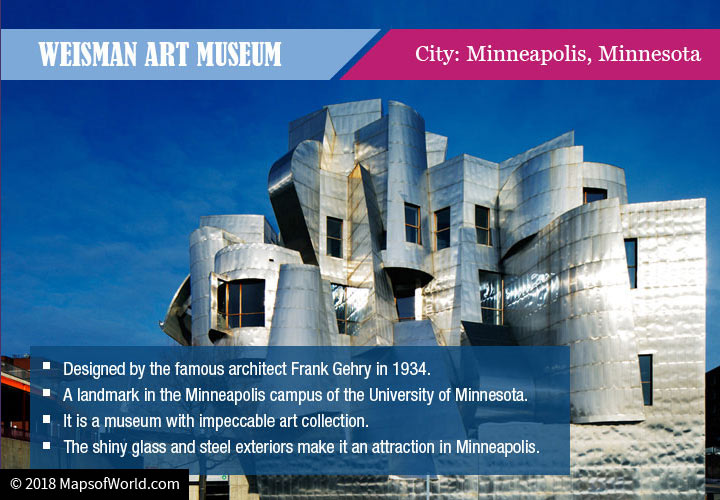 Designed by the famous architect Frank Gehry in 1934, the Weisman Art Museum located in the Minneapolis campus of the University of Minnesota is a landmark. The wavy stainless-steel skin, manufactured and installed by the A. Zahner Company has become its unique identity. The shiny glass and steel exteriors form the perfect prelude to the wonderful art collection inside the museum. 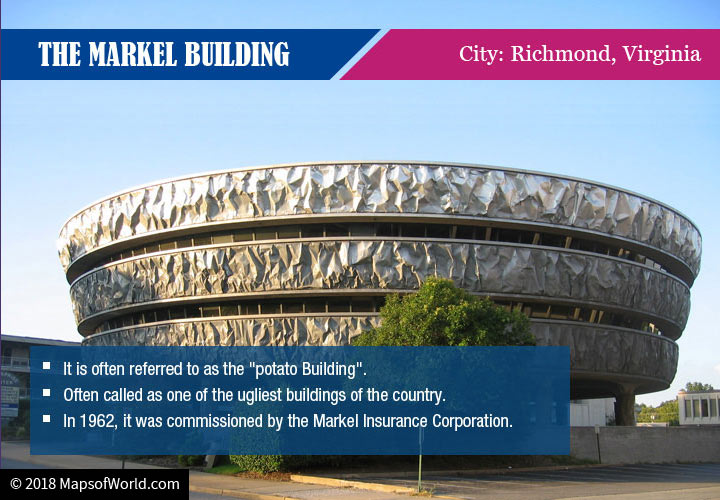 The Markel Building in Richmond, Virginia is unique in many respects. Not only was this building the headquarters of the Markel Insurance Corporation, inspired by a foil-wrapped baked potato that was served to its architect, Haig Jamgochian, it is also popularly regarded as one of the ugliest buildings in the country. The shiny, round building often referred to as the ‘Potato Building’ is unique but certainly something of an eyesore. The building was commissioned in 1962 by the Markel Insurance Corporation.