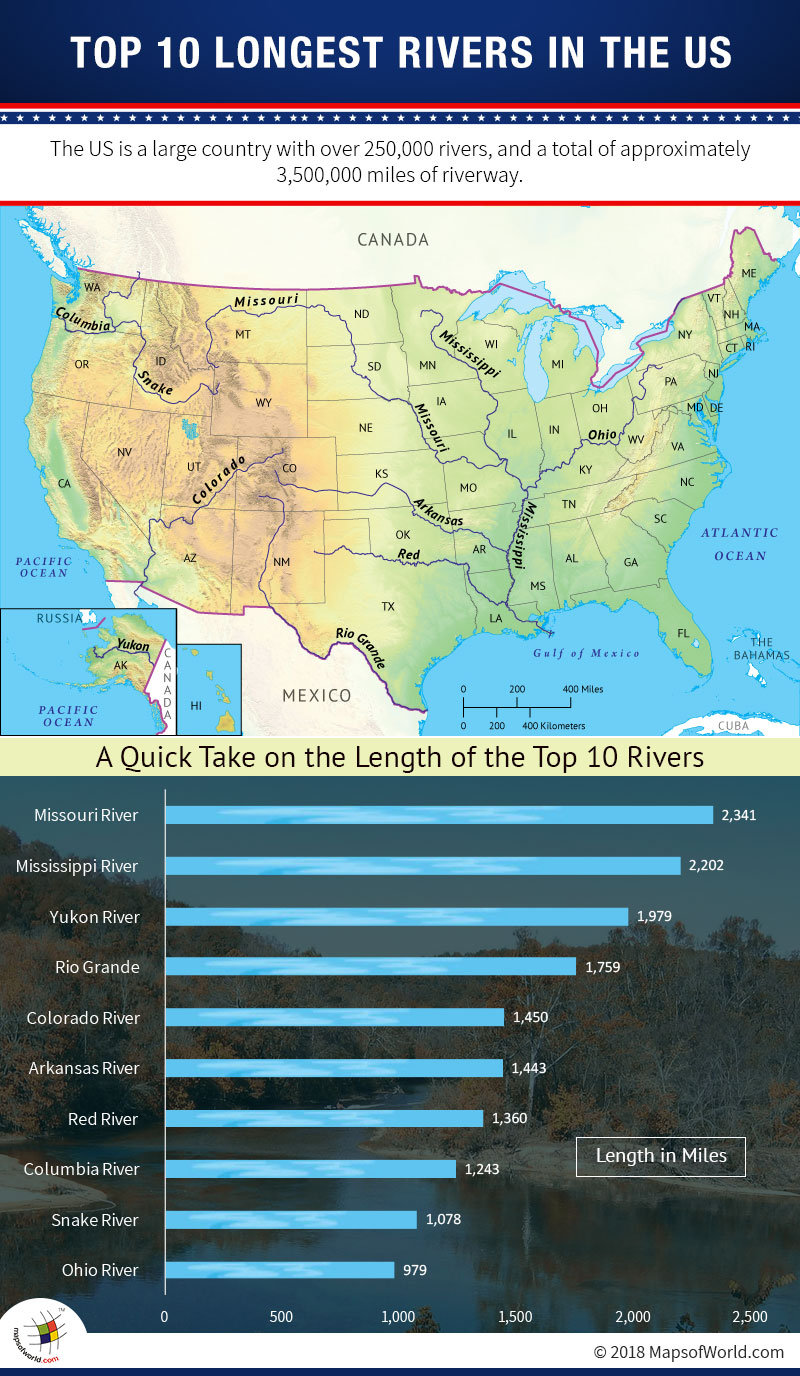 A river is a naturally flowing waterway, usually freshwater, flowing towards an ocean, sea, lake, or another river. The US is a large country with over 250,000 rivers and a total of approximately 3,500,000 miles of the riverway. But there are always some rivers that precede others in terms of length. So, the following list gives us the names of the longest rivers in the USA in the order of their length.

Longest River in the US

Nicknamed “Big Muddy,” the Missouri River is the longest river in the US. It has a whopping length of 2,341 miles and has over 95 significant tributaries, some of which are Platte River, Kansas River, Milk River, Yellowstone River and, James River. For millennia, the area around the upper Missouri River was home to Native American people such as the Blackfeet, Hidatsa, and Crow. Considered the “Center of Life” for the Great Plains, the Missouri River has served as the main artery for exploration, food, trade, and transportation for millions of people over thousands of years. About one-fourth of all the agricultural land in the U.S. is found in the Missouri River watershed, which provides more than one-third of the country’s wheat, flax, barley, and oats.

No river has played a greater part in the development and expansion of America than the Mississippi River. The river’s mouth is at the Gulf of Mexico and its recorded length is about 2,202 miles. The river, which is an important commercial waterway, is renowned across the globe. The Mississippi basin has been providing a fertile agricultural site for over 200 years. A home to 360 species of fish, 326 species of birds, 145 species of amphibians and 50 species of mammals, the river is a classic example of a fertile river. The Mississippi River is the heartbeat of Minneapolis-St. Paul, Minnesota. This vast river flows through 10 states—Minnesota, Wisconsin, Iowa, Illinois, Missouri, Kentucky, Tennessee, Arkansas, Mississippi, and Louisiana. For the nation, the river is a cultural treasure.

The name Yukon is derived from the Gwich’in language and means “great river.” The river has its mouth at the Bering Sea and possesses a length of 1,979 miles. It is regarded as the third longest river in North America and the longest river in Alaska. The Yukon basin is one of the most sparsely populated and least developed regions of North America. The main pull factor of this river is its mineral deposits. The mineral wealth of Yukon has been known since the famous Klondike gold rush of the late 1890s. The mining activity has little development because of the limited transportation alternatives available through this river. A few of its tributaries are the Teslin, Big Salmon, Pelly, Stewart, Klondike, Porcupine, Koyukuk, Takhini, White, and Tanana. The Yukon River is home to one of the longest salmon runs in the world. Each year Coho, Chum, and Chinook (aka king) salmon return to their terminal streams in Alaska, the Yukon Territories, and British Columbia.

The Rio Grande or the “Big River” is one of the longest rivers in USA. Its mouth is at the Gulf of Mexico and has a length of 1,759 miles. The Rio Grande rises in the western part of the Rio Grande National Forest in the US state of Colorado. The river is formed by the joining of several streams at the base of Canby Mountain in the San Juan Mountains, Red River, San Juan River, Rio Alamo, Rio Salado, Devils River, Pecos River, Santa Fe River, are some of its well-known tributaries. Today, the significance of the river has diminished because of diversions which has led to a decrease in water flow of the river, but during the American Civil War, this was the only legitimate port of the Confederacy.

The river provides water for some 2,100,000 acres of cropland, excluding areas irrigated above the reservoirs. The leading industries of the Rio Grande area are mining (petroleum, natural gas, coal, uranium ore, silver, lead, gold, potash, and gypsum), agriculture and animal husbandry. The segments of the Rio Grande are among the most spectacular in America, including two designated National Wild & Scenic River stretch, a pair of National Monuments, and a National Park.

The Arkansas River has its mouth at the Mississippi River and has a length of 1,443 miles. It rises in the Sawatch Range of the Rocky Mountains near Leadville in central Colorado. Historically, the Arkansas River has played an important role in westward expansion. Native Americans hunted along its length, early explorers followed it westward, and from 1820 to 1846, it served as the boundary between the United States and Mexico. It continues to play an important role in the central states, feeding that region’s important farmlands. The McClellan-Kerr Arkansas River Navigation System is part of the inland waterway system originating at the Tulsa Port of Catoosa and running southeast through Oklahoma and Arkansas to the Mississippi River.

The Columbia River has its mouth at the Pacific Ocean with a length of 1,243 miles and over a mile wide in some stretches. The river was named for Captain Robert Gray’s ship the Columbia Rediviva. Some of the main tributaries of the Columbia River include Spillimacheen River, Beaver River, Illecillewaet River, Incomappleux River, Kootenay River, Pend Oreille River, Spokane River, Snake River, John Day River, Deschutes River, Willamette River, Kicking Horse River, Blaeberry River, Canoe River, Kettle River, etc. Fishing has been an important activity in the Columbia River for as long as the region has been inhabited.

The Red River, now a tributary of Atchafalaya River, and was once a tributary of Mississippi River. It has a length of 1,360 miles. It is one of the major rivers in the southern USA and is seen as Texas-Oklahoma boundary. The beautiful bridge constructed over the river enables the visitors to feel its enormity. The presence of rich flora and fauna makes this place a tourist hotspot. Rare animal species like blue catfish and striped bass (fish species) attract explorers. Common migratory birds are Great blue herons, belted kingfishers, ducks, geese, golden eagles, bald eagles, falcons, and hawks. Some of the tributaries include the Little Red River, Prairie Dog Town Fork Red River, Salt Fork Red River, North Fork Red River, Pease River, Washita River, Kiamichi River, Little Wichita River, Little River, Sulphur River, and Loggy Bayou.

The Snake River has a length of 1,078 miles. The river lives up to its name as it follows a complex path before reaching its final destination – it rises in the mountains of the Continental Divide near the southeastern corner of Yellowstone National Park in northwestern Wyoming and flows through the Snake River Plain of southern Idaho, then through the rugged Hells Canyon area via northeastern Oregon and the rolling Palouse Hills, to reach its mouth near the Washington Tri-Cities area, where it enters the Columbia River. The snake river has over 20 major tributaries- Hoback River, Salt River, Portneuf River, Henrys Fork, Malad River, Boise River, Payette River, Weiser River, Salmon River, Clearwater River, and Palouse River.

The Ohio River is another tributary of the Mississippi River and has a length of 979 miles. The confluence of the Allegheny and Monongahela rivers at Pittsburgh forms the Ohio River. It marks several state boundaries: the Ohio–West Virginia, Ohio–Kentucky, Indiana–Kentucky, and Illinois–Kentucky. The Ohio River contributes more water to the Mississippi than does any other tributary and drains an area of 203,900 square miles. Ohio’s tributaries include the Tennessee, Cumberland, Kanawha, Big Sandy, Licking, Kentucky rivers from south and Muskingum, Miami, Wabash, and Scioto rivers from the north. In several treaties, the river also served as a dividing line between British settlements in Kentucky and American Indian communities in the Ohio Country. The British generally remained south of the river, while the American Indians continued to live and hunt north.