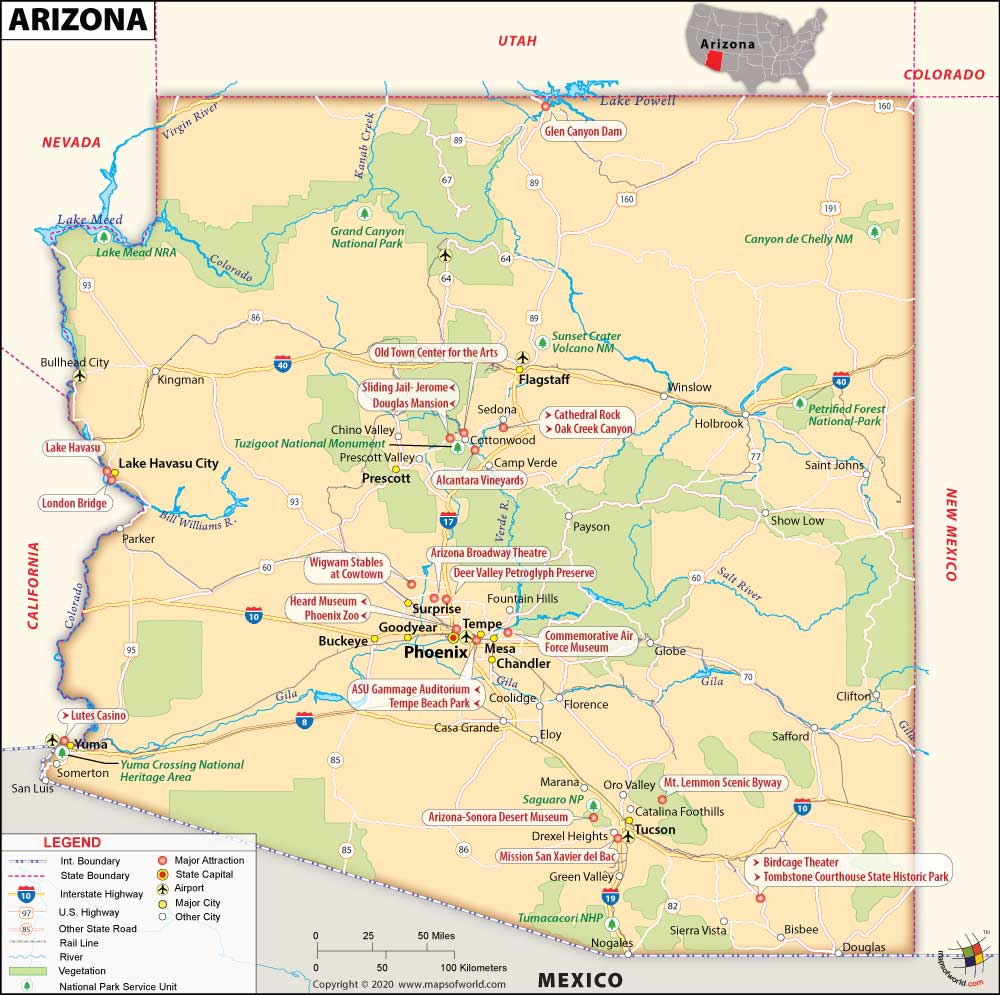 Explore this Map of Arizona to know everything you want to know about the 48th state of the US. Learn about this state’s location in the United States of America. Also, check out its geography, time zones, history, major cities, area and zip codes, national parks, trails, flag, seal, capital, frequently asked questions (FAQs), and many more.

Arizona is the 48th state in the United States. On February 14, 1912, it was admitted to the Union. Phoenix is Arizona’s capital and also the largest city and metro-urban area.

This state’s official language is English. English, Spanish, and Navajo are the most spoken languages in the state. In the US, Arizona is the 14th most populous state. “The Grand Canyon State”, “The Valentine State”, and “The Copper State” are the nicknames of this state. “Ditat Deus” (which means “God enriches”) is the State Motto.

Check Key Facts of Arizona to learn more about this US state.

The flag of Arizona was adopted on February 27, 1917, just five years after it attained statehood. Col Charles W. Harris designed this flag.

Center: At the flag’s center, you’ll find a large superimposed, large five-pointed copper-colored star. It identifies the state as copper’s largest producer in the US.

The official state seal of Arizona is available in black and white, as well as, colored versions. However, the black & white version of the seal is regarded as the official one.

The design of this seal has two parts:

The reservoir, along with the sun, represents Arizona’s sunny and dry climate. Grazing cattle represent ranching, a popular economic activity in the state.

The Arizona Location Map shows the exact location of the US state of Arizona on the United States map. This map also shows the US state’s boundaries, neighboring countries, and oceans.

The state of Arizona is situated in the Western USA. It shares its border with:

The earliest evidence of material culture in the Arizona region can be traced back to over 25,000 years. People belonging to the Cochise culture lived in the current southeastern region of Arizona from over 10,000 years ago to around 500 BCE. The prehistoric societies in Arizona started developing around 2,000 years back. They were mainly Native American groups such as:

All these Native American groups were highly organized and advanced. During 1100-1500 CE, the nomadic Navajo and Apache groups of people arrived in the current Arizona region.

The first Europeans (documented) arrived in Arizona back in the 1530s. A Franciscan priest named Fray Marcos de Niza arrived here in 1539. A well-armed Spanish expedition team led by Francisco Vázquez de Coronado visited Arizona in 1540. Antonio de Espejo, a Spanish explorer, was guided by the Hopi tribe members in 1583 to the metal ore sites.

In the hope of converting Native Americans to Christianity, many Franciscan missionaries established in the Hopi villages by 1675. However, in 1680, the region-wide Pueblo Rebellion drove the Spaniards away. The first Roman Catholic churches were built in southern Arizona’s upper Santa Cruz Valley in the 1700s. The Hispanics also started to pour in during this time. However, the Apache raiders confined them to the valley only.

In 1848, the Arizona region became a part of New Mexico and was finally ceded to the United States of America. After the Mexican-American War, the Arizona territory became independent in 1963.

East of Yuma, Jacob Snively discovered gold in Gila City. This led to large-scale gold mining in 1858. In 1886, Geronimo (a leader of Apache warriors who kept settlers away from the tribal lands) surrendered at Skeleton Canyon to General Nelson Miles. Phoenix became the capital of Arizona in 1889.

In 1908, the Grand Canyon was declared a national monument. It was designated as a national park in 1919. In 1911, the Theodore Roosevelt Dam was created. On February 14, 1912, Arizona was admitted to the Union as the 48th state of the USA. Women were granted their right to exert their vote in 1912.

The geographical area of Arizona has four significant landforms:

It can be found in the Navajo Section, the part of the Colorado Plateau in northeastern Arizona.

It is a transition zone that includes a belt of mighty escarpments. Mogollon Rim features cliffs that are as high as 2,000 feet (610 m). This geographical area includes:

You’ll find The Coconino National Forest in this area, which enables you to explore:

The Sky Islands include isolated mountain range series. It is spread across:

This geographical region is known for its biological diversity. In the higher elevations, you’ll find certain temperate trees and shrubs (primarily southerly populations). You’ll discover northerly populations of subtropical species. The vast biological diversity ensures you will find many endemic organisms in many ranges in the Sky Islands’ geographical landform. Check this Arizona Topographic Map to learn more.

Learn about the location of mountain peaks, rivers, lakes, the state capital, state boundary, ocean, and neighboring states from this Physical Map of Arizona.

The US State of Arizona has 5 area codes:

The Arizona Area Codes Map helps you locate a particular area code. You can also use it to learn more about the area code boundary, county and state boundaries, and state capital.

Learn about the state’s major cities from this Arizona cities map. It also helps you to know the exact location of the state capital, other cities, state boundaries, neighboring states and oceans, and many more.

Some of Arizona’s most prominent cities are Phoenix, Mesa, Tucson, Scottsdale, Chandler, and many more. Check out the Arizona Cities Map for more details.

In Arizona, you can enjoy around 3,237 recreational trails (hiking, backpacking, mountain biking, and other adventurous trails). Devils Bridge Trail, Camelback Mountain (through Echo Canyon Trail), Cathedral Rock Trail, etc., are some of the most popular trails in Arizona. Check out the National Parks in Arizona Map to get a clear idea about the locations of different national parks, monuments, preserves, etc.

To learn more about the climatic condition of Arizona, check out the Key Facts of Arizona.

FAQ #1: What Time Zone Is Arizona? Is Arizona In Pacific Time?

FAQ #3: What Is The Capital Of Arizona?

Ans: Phoenix is the capital of Arizona.

FAQ #5: How Many People Live In Arizona?

Ans: The population of Arizona is estimated to be 7.4 million in 2022.

FAQ #6: Is Arizona A Republican State?

Ans: Traditionally, Arizona is a Republican state. However, in the 2020 US Presidential Election, the state voted for the Democrats and turned blue.

FAQ #7: What To Do In Phoenix Arizona?

FAQ #8: When Did Arizona Become A State?

Ans: On February 14, 1912, Arizona became a state and was admitted to the Union.

FAQ #9: Who Is The Governor Of Arizona?

Ans: Republican Party Doug Ducey is the Governor of Arizona.

Ans: Cactus Wren (Campylorhynchus brunneicapillus) is Arizona’s state bird. It is a brown-colored bird having a speckled chest.