Where is Fresno Located in California, USA 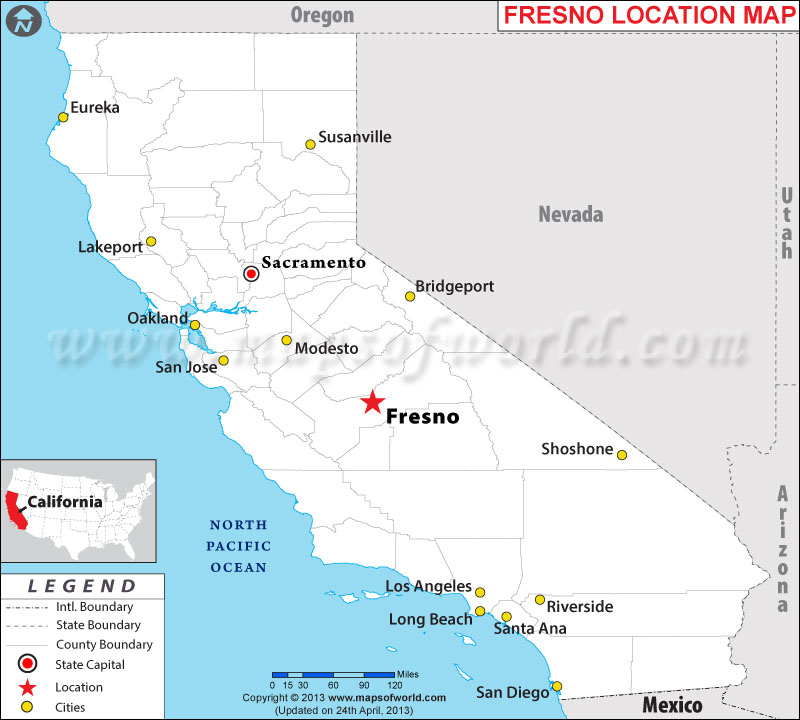 
The city of Fresno lies in the Central Valley of California and it is the fifth most populated and the largest inland city in 'The Golden State'. It is the county seat of Fresno County, which was formed in 1856 after the California Gold Rush. Its name in Spanish translates as "ash tree" which features on city's flag. The hometown of the great dramatist William Saroyan is famous for historical theaters, raisin harvests, elm trees, thick fogs, and a Concours d'Elégance.

Places to Visit in Fresno
Forestiere Underground Gardens may be an unconventional tourist attraction, but remains the most popular one in the city. The Fresno Chaffee Zoo, Old Fresno Water Tower, and Legion of Valor Museum are other points of interest in the city. Awaken your inner Picasso at Fresno Art Museum and satisfy your inner geek at The Discovery Center. The water slides and pools at Island Waterpark are the best spots to get drenched under the California sun. There are four regional city parks in Fresno: Roeding Park, Woodward Park, Kearney Park, and Regional Sports Park.

Things to Do in Fresno
Fresno is an ideal launchpad for the excursions in Yosemite National Park – a UNESCO World Heritage Site.

Drive past stately homes between First Street and Cedar Avenue on Huntington Boulevard, book tickets for StageWorks Fresno play or a stage performance at the Tower Theatre, go on Old Town Clovis Wine Walk to wine and dine, rent a bike and explore the beauty of Woodward Park, and try the delicious tri-tip sandwiches and bread pudding while sampling through food trucks.

Attend ArtHop events that are held monthly across multiple venues in Fresno. Start antiquing and treasure hunting in local shops which have popped up around Tower District, River Park, and Old Town Clovis neighborhoods. The River Park Shopping Center, Manchester Center, and Fashion Fair Mall is where Fresnans like to shop.

When to Visit Fresno
The city has moist winters and dry summers; so each season brings new attractions. During Holiday season, the boulevards are adorned with decorations and nation's tallest living Christmas Tree, at Huntington and 6th Street, is a sight to see.