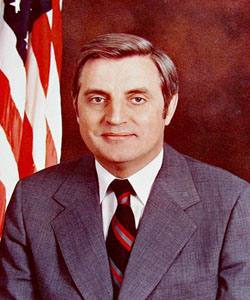 Walter Mondale also served the country as the Senator of Minnesota. He was the member of the American political party the Democratic Farmer Labor Party of America. He was also a candidate for the Presidential elections as a representative of the Democratic Party of America opposite to the Republican candidate Ronald Reagan. He was again elected for the regions of the Minnesota State and the Columbia district.

Walter Mondale was born in the year 1928 on the month January in the region of Minnesota, U.S. His father was the church minister of the Methodist church and was a teacher of an elementary school. He graduated in Political Science and then became a member of the United States Army during the Korean War. He then worked as a lawyer in the region of Minneapolis and then joined politics in the later years. Walter Mondale was sworn as the Vice President of the United States in the year 1977 on the month of January.

Walter Mondale came to politics when he was 20 years of age. He became the Attorney General of the U.S in the year 1960. He became famous all over for his role in the investigation the cause and reasons behind the Apollo1 fire in the year 1967 on the month of January. Walter Mondale traveled throughout the various regions of the United States of America for the development of the infrastructure of the country and carry forward the administration policies o the state to every individual of the country.