Calvin Coolidge is indeed one of the most remarkable political figures of the United States. This eminent man of politics was born on 4th July, 1872 in Plymouth. He was the… 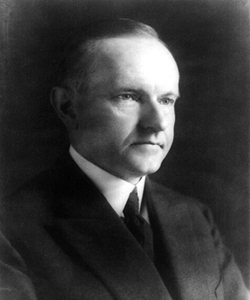 Calvin Coolidge is indeed one of the most remarkable political figures of the United States. This eminent man of politics was born on 4th July, 1872 in Plymouth. He was the son of John Calvin Coolidge and Victoria Moor Coolidge.

In his early years Calvin Coolidge acquired his political knowledge from his father. In 1895 he completed his graduation from Amherst. During this time he stepped in politics for the first time. In those years by working hard on ward and city committees he started to expand his political participation.

Though Calvin Coolidge was shy but with his extreme sincerity he was able to gain the confidence of voters and political leaders. With his hard work and sincerity he had seen to be occupying one office after other.

Throughout his life Coolidge supported economy, party regularity and conservatism. In 1905 Calvin Coolidge knot his tie with Grace Anna Goodhue of Burlington and had two sons named John and Calvin.

With the fall of the progressives fortune of Calvin Coolidge rose higher. In 1915 he was elected lieutenant governor whereas on 1st January, 1919, he had been introduced as governor of Massachusetts. Some of the unexpected events played a vital role in his political career. The police strike of Boston is one among them that brought him huge national prominence.

In July, 1921 Calvin Coolidge underwent the most controversial period as a vice-President.