Albert Algore “Al” Gore, Jr. was born on 31st March, 1948. Al Goreserved the United States of America, as the forty-fifth Vice President and served the tenure under Bill Clinton, from the year… 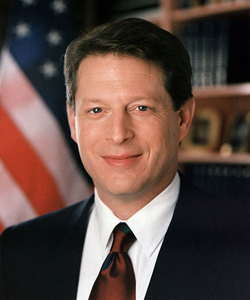 Al Goreand Clinton’s rule is said to have expanded the economy of the United States of America in these eight years of their tenure. Al Gore’s major claim to fame was the act of National Performance Review, which emphasized on cutting down the bureaucracy in the federal government system.

Al Gorealso voiced his opinion on the issue of free trade. Gore argued in favor of the free trade and NAFTA. While serving his tenure as the Vice President of United States of America he worked towards the promotion of NASA satellite that would constantly provide an aerial view of Earth. Although, the plan of promoting this project failed because opposition party, the Republican Congress did not really support the plan.

After serving his tenure as the vice president till the year 2001, Gore also stood for the United States Presidential Election, which was held in the year 2000.

Al Gorehas remained an active political figure even after serving the tenure of Vice-President. He has worked toward the promoting certain environmental awareness among the public. His concern in the field of technology has also gained him appreciation where Gore has tried hard in developing the technical aspects through the Internet.

Al Gore’s work over the years has proved him an eligible candidate to stand as a major political figure in the country.