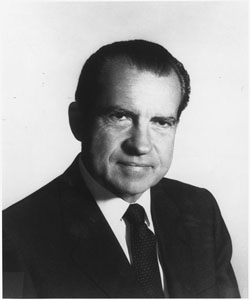 He was the only person to be elected as the President and the Vice President of the United States twice. Initially he acted as the Lieutenant Commander for the U.S Navy. He gave out a brilliant performance as the lieutenant during the Second World War and was instantly popular with the general mass and the administration of the United States. Richard Nixon concentrated a lot on the U.S foreign Policy being the vice President of the country.

Vice President and the President of U.S Richard Nixon was born in California, U.S and completed his studies in California itself. He pursued law for his higher studies and was reputed to be a very good student. He was also a sportsman who kept regular track of the sport events taking place in the region. He started working as a lawyer after finishing his studies. Richard Nixon was elected the vice President of the United States of America in the year 1952 when he was 39 years old. He represented the Republican Party of the united States of America and was famous for his rhetoric speeches. He had a huge support of the Republican Part and the U.S Media during his term as the Vice President of the country. He had also been the person running the government when the President of U.S, Eisenhower was ill.

Richard Nixon was one of the Presidents of the United States of America who fought for the civil rights for all and the economic condition of the country. He died in the year 1994 due to a massive heart attack.