Aaron Burr has served the term of a Vice President in the United States of America. Aaron Burr was born in the year 1756 on 6th February and died in 1836. Since the year 1789, Aaron Burr got politically involved and… 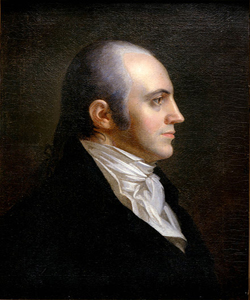 Aaron Burr has served the term of a Vice President in the United States of America. Aaron Burr was born in the year 1756 on 6th February and died in 1836.

Since the year 1789, Aaron Burr got politically involved and active, when he was appointed the Attorney General by Governor George Clinton. In 1797, Aaron Burr entered the New York legislature. A social club founded in 1789, known as Tammany Society was converted into powerful machinery used to influence the urban mindset. This incident in Burr’s life gave him the claim of repute. Aaron Burr, served the term of the vice president in the United States of America from the year 1801 to 1805.

In the year 1800, Burr received the Republican ticket for the position of the Vice President. Burr became the vice president because of the fact that there was a tie with 73 votes each, between Thomas Jefferson and Aaron Burr.

Burr fled to Philadelphia, where he met Jonathan Dayton

and planned a scheme to build a vast empire after the conquest of Mexico and separation of the Union and the trans-Appalachian states.

Burr came back to Washington to serve his tenure as the vice president. He was requested to preside over the impeachment trial of Supreme Court Justice Samuel Chase. This impeachment failed and Burr’s conduct has been taken as an ideal for maintaining decorum and impartiality.

Aaron Burr, after serving his tenure he moved to Europe and in the year 1812, returned to New York.