Charles Fairbanks (1905-1909) was the twenty sixth Vice President of the United States of America succeeding Theodore Roosevelt. He took on the charge of the US Vice Presidency on 4th March,… 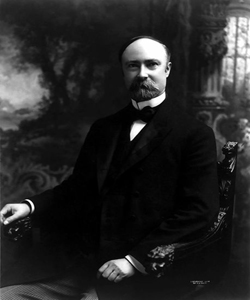 Charles Fairbanks (1905-1909) was the twenty sixth Vice President of the United States of America succeeding Theodore Roosevelt. He took on the charge of the US Vice Presidency on 4th March, 1905 and completed his term till March 4, 1909.

His full name is Charles Warren Fairbanks. He was born in a log cabin near Unionville Center in Ohio. In his early life, Charles Fairbanks attended country schools and worked on a farm. For higher studies, he left for Ohio Wesleyan University to be graduated in 1872. While in the University, he was the co-editor of the school news magazine.

The Republican candidate Charles Fairbanks was a Senator from Indiana from 1897 to 1905. In these eight years, Fairbanks played the key adviser’s role to McKinley during the Spanish-American War. He also took the responsible post of the Chairman of the Committee on Immigration and the Committee on Public Buildings and Grounds. In 1898 a membership was granted to him by the United States and British Joint High Commission.

Though Charles Fairbanks served all the four years of his term of US Vice Presidency with Theodore Roosevelt, he was supported by Roosevelt for the position of US President in 1908. Instead Roosevelt supported William Howard Tuft.

The Republican Party nominated Charles Fairbanks for the US Vice President’s post under Charles Evans Hughes on June 10. But they lost the election to the Democratic candidates Woodrow Wilson and Thomas Marshall. Although Charles Fairbanks could not win the election, the exemplary factor is that he was only the second person to be nominated by the Republican Party for the same position of Vice Presidency.