Harry S. Truman was the President of the United States from 1945 to 1953. His presidency was marked by the use of nuclear weapons during World War II. The Cold… 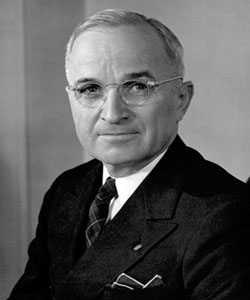 Harry S. Truman was the President of the United States from 1945 to 1953. His presidency was marked by the use of nuclear weapons during World War II. The Cold War between the Democratic West and the Communist East also started during his political tenure. Truman died on 26th December, 1972.

Early Life and Marriage Harry S. Truman was born to John Anderson Truman and Martha Ellen Young Truman on 8th May, 1884. Truman’s father was a livestock seller and farmer. Harry S. Truman graduated from Independence High School in 1901. He enlisted in the United States military in 1917. Harry Truman participated in World War I as a soldier in the Missouri National Guard. He returned from the war as a colonel. Harry S. Truman married Bess Wallace on 28th June, 1919. The marriage was a happy one and resulted in the birth of a daughter, Mary Margaret Truman, in 1924.

Truman Committee Harry S. Truman became a U.S. Senator in 1934 from Missouri. He was re-elected in 1940. One of Truman’s many contributions to the U.S. War effort during World War II is the Truman committee’s cost saving measures. The committee was entrusted with the task of minimizing non-essential military expenses occurred during the war. The success of the Truman Committee was to catapult Truman into the political consciousness of the United States.

Manhattan Project Harry S. Truman’s presidency in its initial years was dominated by the events of the Second World War. The development and culmination of the Manhattan Project occurred during Truman’s time. The Manhattan Project was a military effort that resulted in the nuclear bombings of Hiroshima and Nagasaki. President Truman authorized the use of nuclear bombs during World War II. The logic was that, the devastation of a nuclear strike would force the Japanese to surrender-and they did.

Post World War II Harry S. Truman exhibited striking leadership skills after World War II. The European reconstruction guideline of the Marshall Plan was created under his political tutelage. The Truman Doctrine bears the US President’s well thought out hallmark. The Cold War strategy of formulating a central Department of Defense was also brought about by Harry Truman. The 1947 National Security Act laid the path of the creation of the National Security Council and the Central Intelligence Agency (CIA). Truman was also a strong advocate of the North American Treaty Organization (NATO).

The United States recognized the Jewish nation of Israel when President Truman was in the Oval office. Israel declared itself an independent nation in 1948. The Berlin airlift also took place during Truman’s tenure.

The Truman administration was particularly successful in upholding and ensuring civil rights for all US citizens irrespective of color. He ended segregationist policies relating to the army and the workplace. The economic outlook of the United States also improved considerably during Truman’s presidency.

Harry S. Truman died on the 5th of December, 1972. The cause of death was multiple organ failure and pneumonia.