George Herbert Walker Bush (1981-1989) was born on 12 June 1924 in Milton, Massachusetts and is the 41st president of US . Before entering politics, George Bush senior was an employee in the oil industry, and… 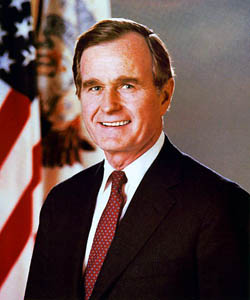 Before entering politics, George Bush senior was an employee in the oil industry, and also as head of the Zapata Off-Shore Company. In 1966 George Herbert Walker Bush gained his first major platform to enter politics after he was elected as a Republican to the Texas Seventh US Congressional District.

Later in 1971,the then President Nixon appointed Bush as US Ambassador to the United Nations. In 1973 he became governing head of the Republican Party National Committee. Bush became the Director of the Central Intelligence Agency (CIA) for a year in 1976 under Gerald Ford,.

Bush served two terms as vice president to Ronald Reagan from 1981-1989 before being elected to the president position. Then in 1989 George Bush was elected the 41st president of the United States defeating his competitor Democrat Michael Dukakis.

George Bush ordered to conquer the Panama to overthrow the Noriega in 1989 thus continued to preside over the US-led United Nations campaigns to remove the Iraqi forces out of Kuwait during the Gulf War in 1991.

In the 1992 presidential elections Bush lost out to Democrat, Bill Clinton. George Bush has lived in residences from splendid mansions to Navy barracks that makes him even more experienced as an human being and made him see reality of life more closely, and from apartments to magnificent vacation homes. George and Barbara Bush, his wife currently live comfortably in a modern home in Houston, Texas.