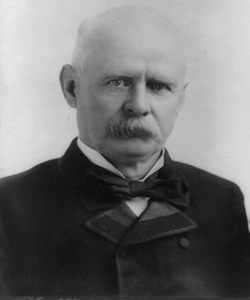 Adlai E. Stevenson (1893-1897) was the 23rd Vice president of the United States of America. He was born on 23rd October, 1835 at Christian County in Kentucky. He studied in the common school at Blue Water in Kentucky.

Adlai E. Stevenson was admitted to the bar in 1858 at the age of 23 where he started practice in Metamora, in Woodford County, Illinois as the lawyer. He started his law practice seriously with his cousin, James S. Ewing. Their law firm Stevenson & Ewing soon became one of the famous in the state.

He campaigned for Douglas in his 1858 Senate race against Lincoln. He held his first public office during the Civil war. In 1864 Adlai E. Stevenson was a Presidential elector as the Democratic candidate. He was elected district attorney too. Stevenson got elected as a Democratic candidate to the Forty-fourth Congress where he served from 4th March to the same date in 1877.

In the 1876 Congress Election, he once again filed his nomination. But he was defeated by the Republican candidate headed by Rutherford B. Hayes. In 1878, Adlai E. Stevenson contested again with more force on both the Democratic and Greenback tickets. This time he was the successful candidate. But in his 1880 and 1882 race for Congress, he lost.

In 1892, Adlai E. Stevenson was elected as the US Vice President as the Democratic candidate. Even after holding this position he is said to be nominating Democrat names to the Post Office Department.