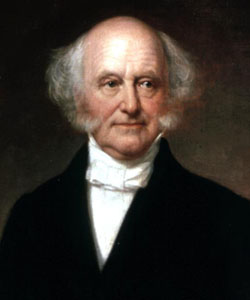 Martin Van Buren nicknamed as Old Kinder hook was born on December 5, 1782 and was the eighth President of the United States from 1837 to 1841.

Before becoming the President Martin Van Buren served as the eighth Vice President from 1833 to1837. He was also the 10th Secretary of State under the supervision Andrew Jackson. Martin Van Buren was one of the founders of the Democratic Party, and a major figure in the Second Party System. He was the first Dutch President of the US Constituency.

Van Buren had served one term or less and thus was the first among the series of eight presidents between Andrew Jackson and Abraham Lincoln. He also was one of the main figures in developing modern political parties and organizations. Martin Van Buren was a key figure in making up the organizational structure for Jacksonian democracy as Andrew Jackson’s Secretary of State and then eventually the Vice President. However, as the President, his administration was largely revolving around the economic hardship of his time, the Mess of 1837. However Van Buren was voted out of office after four years because of the Aroostook War and the Caroline Affair.

Martin Van Buren was succeeded by William Henry Harrison. Until George Bush Martin, Van Buren has been the last vive president to be elected to succeed to the President existing.

Martin Van Buren died due to bronchial asthma and heart failure at his Lindenwald estate in Kinder hook on July 24, 1862 and is buried in the Kinder hook Cemetery.