Henry A. Wallace was the 33rd Vice President of the United States. He was a noted agriculturist and the founder of Pioneer Hi-Bred Corporation. Henry A. Wallace served his vice-presidency… 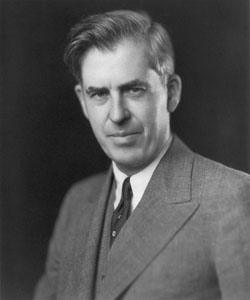 Henry A. Wallace was the 33rd Vice President of the United States. He was a noted agriculturist and the founder of Pioneer Hi-Bred Corporation. Henry A. Wallace served his vice-presidency under President Franklin D. Roosevelt.

Early Life Henry A. Wallace was born on 7th October, 1888 in Iowa. Wallace worked as a member of the editorial staff of the Wallace’s Farmer magazine in his early non-political career (1910 to 1924).

Wallace the Scientist Henry A. Wallace was also noted as an agricultural scientist. He devised a new breed of high-yielding varieties of maize. Wallace also structured the first corn-hog ratio charts that predicted the futures of agricultural markets.

Vice President of the United States Henry A. Wallace became the United States Vice President on November, 1940. He won on a Democratic Party ticket. President Franklin D. Roosevelt appointed him Chairman of the Priorities and Allocations Board and also Chairman of the Board of Economic Warfare in 1941. The outbreak of World War II bought to the fore Wallace’s excellent networking skills. He toured Latin American countries and convinced them to support the Allies’ war effort.

Henry A. Wallace served as Secretary of Commerce from March 1945 to September 1946. He was dismissed from the post by President Harry S. Truman. The ostensible reason was the liberal attitude of Wallace towards the USSR.

Dismissal The dismissal of Wallace from the post of Secretary of Commerce prompted him to publish articles against Truman’s policies through The New Republic magazine. He was an editor of the New Republic. The Truman Doctrine was also vociferously attacked in his articles.

Presidential Nominee Henry A. Wallace was a contestant in the 1948 Presidential Race. He was nominated from the Progressive Party. Wallace had the confidence of a mere 2.4% of the popular vote and lost the election to Truman.

Life after Politics Henry A. Wallace spent his post-political life in the suburban New York county of South Salem. He made notable advances in the commercial life-sciences industry. A new breed of battery chicken was developed by the company he founded- Pioneer Hi-Bred company. The breed was a commercial success.

Henry A. Wallace died on 18th November, 1965. He was cremated and his ashes are kept in Glendale Cemetery of Des Moines in Iowa.