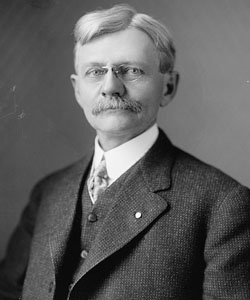 Thomas R. Marshall was born on 14th March, 1854. He was indeed one of the renowned political figures of the United States. Thomas R. Marshall had been the member of the Democratic Party and Governor of Indiana from 1909 to 1913.

From 1913-1921 this great personality held the office of vice-president. He had been the 28th vice-president of the United States.

Thomas R. Marshall had been the vice-president for 2 consecutive terms under Wilson. He Was the first Vice President who presided over the cabinet meetings in the absence of the President when President Woodrow Wilson went through a severe stroke in 1919. Marshall had a strong democratic background and so he was seen to be actively involved in politics throughout his life.

In 1876 Thomas R. Marshall became the secretary of the Democratic County Convention where he spoke for many Democratic candidates but in 1880 Marshall lost an election for the sake of prosecuting attorney.

Although this great man became a member of the Democratic State Central Committee, until 1908, he did not run since he was sought the Democratic nomination for governor. When the front candidates eliminated each other from the race, Marshall finally won the nomination. He was seen to be campaigning against Republican Representative James “Sunny Jim” Watson.

The same year, Thomas R. Marshall had been elected governor. Following the Democratic Convention of Baltimore in 1912, Marshall was put forward as a dummy presidential candidate of the party. However, his opponent William Jennings Brown had put certain terms to his candidature which led to his being selected as the vice President over Marshall.

Marshall is said to be the last governor to remain a vice-president during two complete consecutive mandates. At the end of his mandate also he continued to replace Wilson for ceremonies.

Just after the mandate, in 1921, Marshall returned to Indianapolis.

In 1925 Marshall passed away. Thomas R. Marshall was buried with the cemetery of Crown Hill in Indianapolis of Indiana.