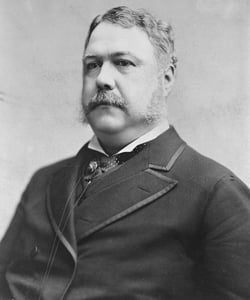 Chester Arthurwas the twentieth Vice President of the United States of America. Born in the year 1892, Fairfield in Franklin County, Vermont was the home town of Chester Arthur.

Much of Chester Arthur’s boyhood days were spent in Perry, New York and he had already started showing traces of leadership talents. Chester Arthur served as a Perry, New York for some time and then went on to study Law to be finally admitted in the bar in the year 1854. Chester Arthur was widely supported for his service as an acting quartermaster general of the state during the American Civil War. His work later led to his commission as a inspector general, and appointed quartermaster general with the post of a brigadier general which he served till the year 1862.

While playing the role of a Collector of the Port of New York, after the war, Chester Arthur was strict about fair administration of the Custom house. In the year 1878, Rutherford Hayes initiated some reforms for the custom house and in the process removed Chester Arthur from his office. Conkling and his supporters naturally wanted to gain back the office and nominated James A.

In the meantime President Garfield was shot and the assassin rejoiced exclaiming that Arthur would now be the new President. Chester Arthur was completely unaware of this event but he became conscious that many would suspect him of having something to do with the murder. For the following two months Chester Arthur remained in seclusion and the country suffered leaderless. Finally on the 19th of September with the death of Garfield, Chester Arthur assumed the office of the President.