Lyndon B. Johnson is the 37th Vice President of the United Sates of America. He had a long and successful career in the U.S Congress. He was the representative of… 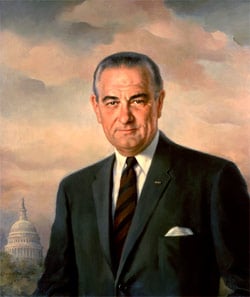 Lyndon B. Johnson is the 37th Vice President of the United Sates of America. He had a long and successful career in the U.S Congress. He was the representative of the Democratic Party of the United States.

Lyndon B. Johnson was born in the year 1908 on the month of August. He finished his school and graduated from California in United States. Besides his academic performances, he was also a good performer on stage. He won several awards in the curriculum at his school. He worked as the Commander of the Texas National Youth Administration and worked towards improving the education and job scenario of the country. He was immensely successful in the Senate and was very popular with the public of the U.S. He was sworn as the Vice President of the United States of America in the year 1961.

Lyndon B. Johnson died in the year 1973 due to heart attack.