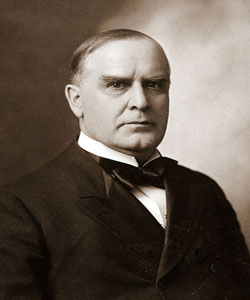 Again, in the year 1891, 1893 McKinley was reelected as the governor of Ohio. Mark Hanna was the campaign manager of McKinley,Williams.

McKinley was the seventh child of his parents. On 29th January, 1843, William McKinley was born at Niles, Ohio. McKinley, as a President of America, introduced modern methods for campaigning. He reorganized the staff system of the White House. McKinley always advocated high tariffs on the goods that were imported. He believed that high tariffs will benefit the Americans.

William McKinley got his education from Allegheny College and Poland Seminary in Ohio. At Canton, Williams became a lawyer after completing his service in Union Army. His political career began in 1876 when he entered US Congress elected as a Republican. His policy on tariffs pleased the industrialists of Ohio. William McKinley was also referred to as the veteran of Civil War.

He married Ida Saxton in 1871. After one year the couple had a daughter named Katherine. In the year 1897 he nominated Sherman, a Senator, as the State Secretary or Secretary of the State. Theodore Roosevelt succeeded McKinley, Williams after his assassination. After completing six months into his second term of office McKinley William was assassinated.

During his tenure as a President of America he worked as a representative of the industrial class. In his Tenure one of the grave issue that he had to face was Spain War.