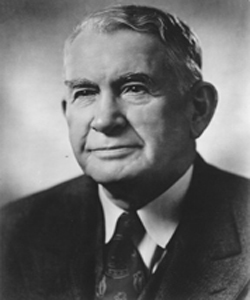 He was an eminent member of the House of Representatives and acquired the position of the Senate of United States from Kentucky, U.S.

The U.S Vice President Alben Barkley was born in the year 1913 in the Graves County. He hailed from a religious farmer family and finished his initial studies in Kentucky. He was a very good student who finished his higher studies in the Virginia University. He was a law student and was renowned in his profession. He carried on with his practice of law.

Alben Barkley represented the Democratic Party of United States of America. He was very popular with the general mass as he stood beside them in every thick and thin. He won the election of the Congress due to his strong campaigns and good oratory skill.

Alben Barkley selected for the Congressional Gold Medal in the year 1949 for his brilliant performance as a Vice President and his efficiency to solve the administrative problems.

Alben Barkley died in the year 1955 due to a massive heart attack during delivering a speech in the ceremony of the Mock Convention.