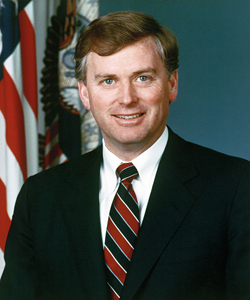 When he was the Vice President, George H. W.Bush ( 1989-1993) was the President of USA. His father was a publisher of a newspaper in Indiana.

On 4th February, 1947 Dan Quayle was born in Indianapolis, Indiana. He belonged to the Republican Party in USA. Dan Quayle also served as a US Senator from Indiana. His tenure was from 3rd January, 1981 to 3rd January 1989.Dan Quayle completed his graduation from Huntington High School.

He did Bachelors in Political Science from DePauw University in the year 1969.After his tenure he was succeeded by Al Gore. He did his service in the National Guard of Indiana from the year 1969 to 1975.

At an early age of 33 he got elected from Indiana for the US Senate, in the year 1980. He entered the US Senate defeating Birch Bayh, a Democrat. In his term of office, he did many activities or work in legislature. The fields in which he worked are as follows:

Dan Quayle even worked in different committees like Budget Committee, Human Resource and Labor Committee and Committee on the Armed Services. He even worked with Edward Kennedy in the year 1982.Dan Quayle jointly worked with Edward Kennedy in the Job Training Partnership Act. His career in politics began at 29 when he was elected to the US Congress in 1976. At the age of 41 he became the Vice President of USA.