John Caldwell Calhoun or commonly John C. Calhoun was born on March 18, 1782 and assumed office as the United State’s seventh vice president on March 4, 1825 until 1832, during a period of havoc… 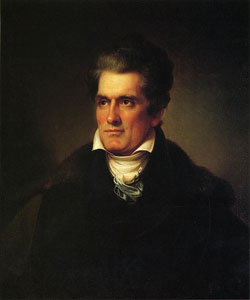 John Caldwell Calhoun or commonly John C. Calhoun was born on March 18, 1782 and assumed office as the United State’s seventh vice president on March 4, 1825 until 1832, during a period of havoc political turmoil.

The decline of the Federalist Party after the War of 1812 had increased bitter feelings among the party members. The “National Republicans,” group that comprised of Calhoun, House Speaker Henry Clay, and Secretary of State John Quincy Adams, favored the expansion of the “Radicals,” that was in combination with the Treasury Secretary William Crawford. Most famous activity in Calhoun’s life is the pre-Civil War debate over states’ rights. John Caldwell Calhoun primarily came as an U.S. Senator from South Carolina (1832-43, 1845-50) and was elected as a vice president under the then presidents John Quincy Adams (1825-29) and Andrew Jackson (1829-32).

Calhoun grew up in South Carolina and worked in a law firm back home in Abbe ville. He had been a State Representative (1808) and an U.S. representative (1811-1817) before becoming President. His terms as vice president were quite disputable because of differences with his presidents. In 1832 Calhoun resigned vice president ship and became a U.S. Senator, then a brief Secretaryship of State under President Tyler (1844-45) and finally served became the Senate till his death in 1850.

After his death, John Calhoun became a symbol for southern united citizens and his fondness was used on the currency of the Confederate States of America during the Civil War.