John Tyler, Jr. or John Tyler born on March 29, 1790 was the tenth President of the United States from 1841 to 1845. A Democrat-Republican for many years, John Tyler Jr. was selected as the Vice… 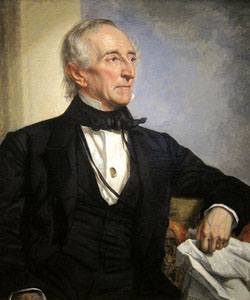 John Tyler, Jr. or John Tyler born on March 29, 1790 was the tenth President of the United States from 1841 to 1845. A Democrat-Republican for many years, John Tyler Jr. was selected as the Vice President on the basis of Whig ticket.

On becoming the President in 1841, he got separated with that party. His tenure as a Vice President began on March 4, 1841 and co incidentally only one month later, on April 4, the then President William Henry Harrison expired. Harrison’s death left the union government, and the American nation totally confused on the procedure of succession. Tyler was sworn presidential oath of office, initiating a tradition that would make future succession procedure more acceptable, and thus became the first U.S. vice president to succeed the office of president upon the death of his predecessor. It was not until 1967, that Tyler‘s actual power in the tenure of presidency was legally made into documents in the Twenty-fifth Amendment. His most notable achievement was the appropriation of the Republic of Texas in 1845.

The last year of Tyler‘s presidency was marred by a casual accident that killed two of his own Cabinet members. Tyler‘s death in January 18, 1862 unfortunately was the only one in presidential history of United States that received no official mourning in Washington, because of his commitment to the Confederacy. President pro tempore of the Senate was served by the only President Tyler. He is buried at his Sherwood Forest Plantation. On which John Tyler’s gravestone reads, “Here lies the body of my good horse ‘The General’. For twenty years he bore me around the circuit of my practice an in all that time he never made me blunder. Would that his master could say the same.”