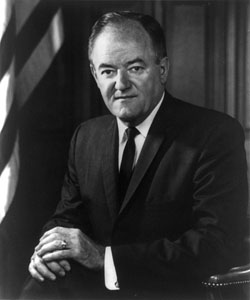 Hubert Humphrey was born in the year 1911 on the month of May in the region of South Dakota,U.S. He came from a modest family and finished his education in the local school. He wore as the Vice President of the United States of America in the year 1965. He had been successful in controlling and using his power to serve the country. He worked for the civil rights in the United States and worked for the betterment of the administrative system of the United States of America. He had been supported by the general mass of the country. After his term as the Vice President he started teaching at the Macalester College. He also taught at the University of Minnesota. He again returned at the Senate of United States in the year 1971 after a break in his political career.

Hubert Humphrey died of Terminal cancer in the year 1978.