As one of the renowned political personalities in United States of America, Thomas Jefferson was a man of sound temperament and intellect. Both as the second Vice President and the third President… 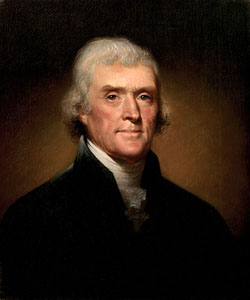 As one of the renowned political personalities in United States of America, Thomas Jefferson was a man of sound temperament and intellect. Both as the second Vice President and the third President of the Unites States of America, he was the ideal successor to his predecessor John Adams.

Born to Peter and Jane Randolph Jefferson on 13th April 1743 in Virginia’s Shadwell, Thomas Jefferson was their third child, growing up in an environment of classical learning. He did his graduation from the College of William and Mary in 1762. As far as his professions are concerned, he started his career as a planter and legal practitioner. It was only after gathering considerable experiences in these diverse fields that he planned to join the national politics. Jefferson‘s marriage with Martha Wayles Skelton resulted in the birth of his two children, Martha and Jane.

The main reason for American Vice President Thomas Jefferson’s entry into national politics was the American Revolution which at that time was knocking on the doors. In fact, Jefferson played perhaps the most important role in the Revolution, in shaping the destiny of the American population after this event. The Philadelphia Convention presided over by Jefferson led to the formation of the Constitution of United States which declared the nation as Federation.

In the hands of Thomas Jefferson, the position of Vice President acquired a completely different connotation and dimension. His scholarly, intellectual and visionary nature was extensively reflected in the Manual of Parliamentary Practice. This political treatise was an authoritative guide to the legal procedures the American nation would follow for the coming two centuries or more. With diplomacy, tactfulness, efficiency and skill, US Vice President Thomas Jefferson set an exceptional example of leadership qualities, yet to be achieved by the contemporary American politicians. He breathed his last in 1801.