Andrew Johnson was a Vise President of the United States of America with Abraham Lincoln as the President. Andrew Johnsonwas born in the year 1808 in Raleigh, North Carolina.Due to the acute poverty of his family Andrew… 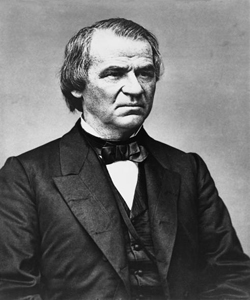 The evolution of Andrew Johnson into politics a lot due to his oratory. The adept stump speaker that Andrew Johnson was helped him to influence the common man. While in the Senate in the 1840’s and ’50’s he strongly fought in favor of a homestead bill. From the year 1828 to 1830 Andrew Johnson served as an alderman in Greeneville and later from 1830 to 1833 as a mayor of Greeneville.

Andrew Johnson served as a Governor of Tennessee from 1853 to 1857 and from the year 1857 to 1862 he was elected as a United State Senate Democrat.

Andrew Johnson was the only Senator in the house, from the seceded states, who continued to participate in the Congress and in the year 1862 President Abraham Lincoln appointed him as the military governor of Tennessee.

With the assassination of the President Abraham Lincoln Andrew Johnson was sworn to Presidency of the United States of America.