Below is County Map of Monterey in California showing the boundaries, roads, highways, towns and much more. 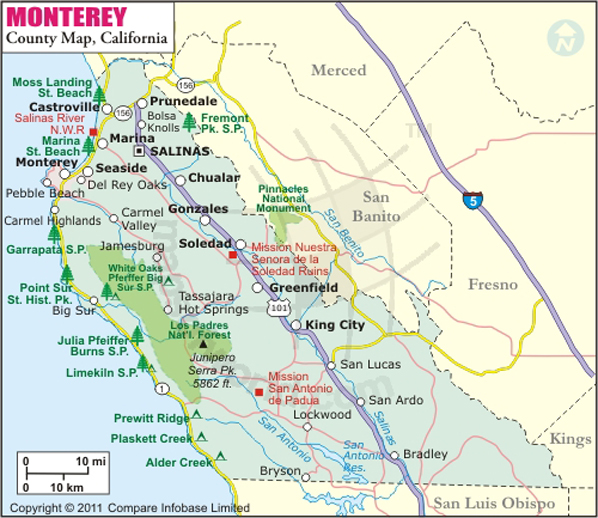 Situated on the Pacific of California lies the Monterey County. Spread over an area of 3,771 square miles, the county comprises a population of 415,057, according to the 2010 census. The county was incorporated on February 18, 1850, and Salinas is its county seat as well as largest city. Some of the counties that border Monterey are Santa Cruz, San Benito, Fresno, Kings, Kern, and San Luis Obispo. It also shares a border with the Pacific Ocean and the Monterey Bay.

The county is famous for the 17 Mile Drive, State Route 1 and Monterey Peninsula. The Big Sur, which has numerous beaches, is frequented by tourists from around the world. Some popular beaches found here are Pfieffer Beach, Sand Dollar Beach, and Point Sur Beach to name a few. Other than Salinas, major cities of the county are King City, Marina, Sand City, Monterey, Greenfield, and Seaside, to name a few.

Monterey Regional Airport connects the counties to other areas, while rail and bus services are provided by the Amtrak trains and Greyhound Lines. Amtrak's Coast Starlight passes through Salinas. Some prominent highways that run through the county are State Route 1, State Route 68, State Route 146, State Route 156 and others.