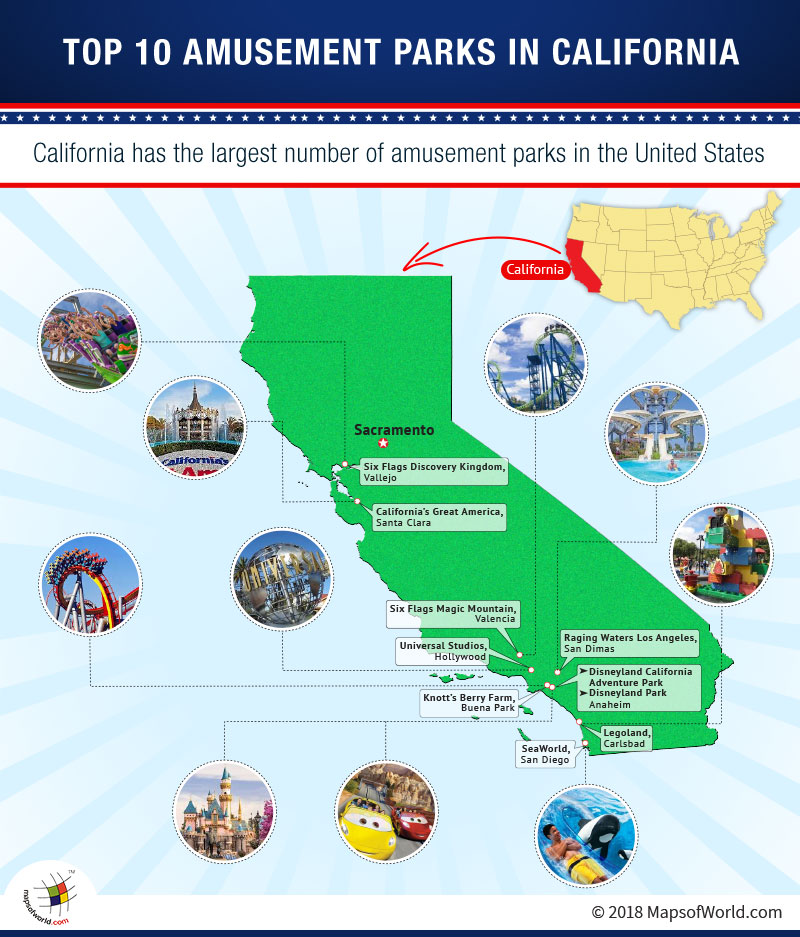 California has the largest number of amusement parks in the United States.

Disneyland ranks as the world’s second most attended amusement park. Part of the original park conceived by Walt Disney in 1955, Disneyland offers the best in a wide range of entertainment options divided into eight major themes. Enter the park, and one can get to meet the most loved characters of Walt Disney, and they are all over the place. A great way to go around the park is to board the steam-engine Toy train. Fantasyland is a children’s paradise with a wide range of joyrides. Watch the kid’s delight when they get to watch the Mickey Mouse performing Mickey and the Magical Map. The ToonTown is where every child wants to live forever, and the popular characters make sure you always want to come back for more. The park is more than amusement; it’s a complete family destination.

The is where all cinema lovers head to for entertainment, amusement, and terrific dining experiences. Catch the Tram ride to move through the Universal Studios Back Lot. There’s something for everyone – thrill seekers, movie lovers, family entertainment. Catch the world of Jurassic Park, Harry Potter’s Hogwarts School of Magic, Kung Fu Panda of DreamWorks, or The World Famous Studio Tour, all designed to offer the best in entertainment. Attractions include 3D Motion Simulators, Aerial Carousel, Interactive Walkthrough Maze, Stunt shows, Roller Coasters, and live performances.

The 160-acre Knott’s Berry Farm, California’s first theme park, opened in 1920 and has evolved into an attractive amusement and entertainment destination for the family. In May 2018, the park opened its revamped coaster rides including water-based ones. Hangtime, promoted as California’s first and only dive coaster, is set to have visitors flocking to it. Soak City, Orange County’s only water park is now open to guests. While there, don’t miss the new adventures in Ghost Town Alive. Mrs. Knotts famous Chicken Dinner Restaurant continues to be a destination for the empty stomach.

The 190-acre property, owned by the City of San Diego, is a complete entertainment and amusement park themed around the marine world. The park comes with oceanarium, aquarium, marine mammal park and an animal theme park. Attractions include the Orca Encounter, Dolphin and Beluga Interaction Programs, Manta- SeaWorld’s multi-media, double launch coaster, Explorer’s Reef – inviting visitors to get into the water and interact, and the interactive Turtle Reef, among several others.  Beginning in May, the Sesame Street Parade will come alive with music and dance, exciting times to check out and join.

The 262-acre amusement park offers the largest number of roller coasters in the world. Opened in 1971, Magic Mountain is set to offer exciting new rides and experiences to visitors. This year visitors can look forward to the world tallest record-breaking pendulum ride – CraZanity, that equals a 17-story high building. Don’t miss out on the Twisted Colossus – another record-breaking hybrid coaster. Get ready for the multi-immersive experience – Battle for Metropolis. All ages are going to love this.

The 128-acre Legoland opened in 1999 and is a very popular site for children. Summer in 2018 has the all-new Lego Chima Water Park opened with an entirely new set of water splash and ride options. With over 50 fun features Cragger’s Swamp is a super attraction with Crooler’s Twist, Crug’s Run, and Eglor’s Build-a-Boat as added features. Legoland Waterpark has other fun places kids love. There’s Build-A-Raft River, Duplo Splash Safari for the very young, Imagination Station, Joker Stoker, and the Twin Chasers, among many others. And then, there’s the all-new Lego City Deep Sea Adventure, where kids can ride a submarine and go on a Treasure Hunt. The Legoland Castle Hotel is a great place to stay and enjoy the resort.

The 135-acre property animal and marine-themed park, located in the San Francisco-Sacramento area, first opened in 1968. In 1999, the park became part of the Six Flag chain of amusements parks and underwent a complete makeover to be known as the Thrill Capital of North California. Attractions in 2018 include the worlds’ first dueling looping coaster – Harley Quinn Crazy Coaster. Completing the crazy figure-8 loops at 70mph with another coaster heading towards you provides enough thrill for a lifetime. The other new attraction is a volcano erupting Dino Island where you can be part of the team that launches a ride to save the last T-Rex Dino and themselves from molten lava.

The 100-acre property owned by Cedar Fair is a major attraction in the Santa Clara area. Great America is offering RailBlazer – the groundbreaking single new rail steel coaster, the first of its kind on the West Coast. Visitors can experience sheer thrill traveling at 52 miles per hour completing three inversions and twist through the zero-gravity roll. For water lovers, the Boomerang Bay is offering thrilling plunges in the Ripsnort Ridge and big splashing activity with Kookaburra Cay. There are live entertainment shows including acrobatics, music, and dance, ensuring everyone has a great time.

The 60-acre Raging Waters is located in San Dimas, part of LA County and is the largest water park in California and recognized as one of the Top 10 water parks in the United States. Raging Waters has been the site of several popular movie and television shootings and is a major family fun site in the area. Raging Waters also manages water parks in Sacramento and San Jose. Star attractions include Aqua Rocket – California’s only hydromagnetic water coaster. Visitors have a choice of 50 different water rides and slides, enough to keep everyone splashing around through the day.

Visit the following to learn more about the California: