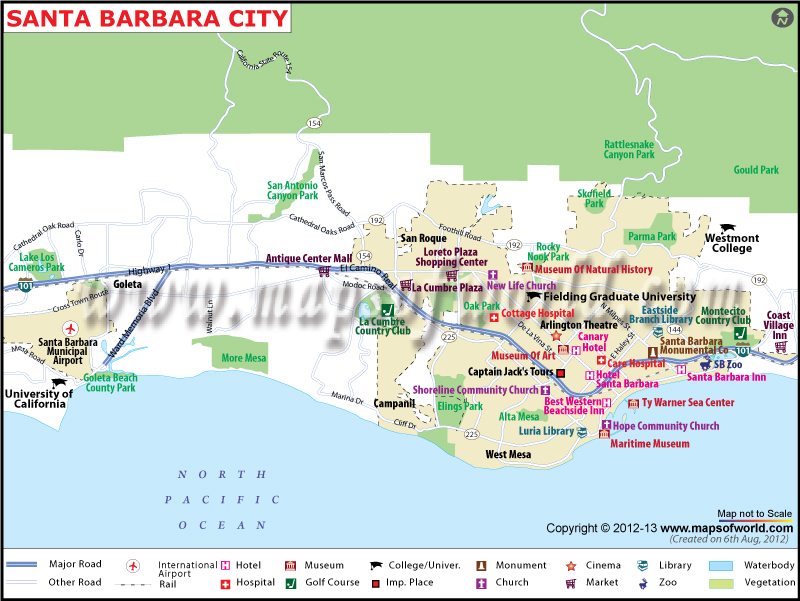 Santa Barbara City Map is a handy resource for finding some of the best places to visit. Located over 41.4 sq miles on the longest beach stretch on the US West coast, the city remains an attractive holiday destination with a wide variety of hotels and resorts overlooking the Pacific Ocean.

Beyond tourism, the city is the County seat for Santa Barbara County and serves several important sectors like education, aerospace and defense.

About Santa Barbara City
The city is conveniently located with the beautiful Santa Ynez Mountains on one side and the Pacific Ocean on the other. Spanish architecture along with late Victorian style shows its influence in residential architecture in and around Santa Barbara. The city is home to several public personalities and exclusive homes dot the city neighborhoods.

Find some of the popular neighborhoods marked out in the Santa Barbara City map and include:


Reaching Santa Barbara by road is easy as it lies on the US Highway 101 which connects San Francisco in the north to L.A. in the south. The Santa Barbara Municipal Airport operates commercial flights while Amtrak offers rail connectivity from the station on State Street.

Educational Institutions
The city is home to the popular University of California, Santa Barbara, a leading research university in the region. For liberal arts, Westmont College, Antioch University, Santa Barbara City College and Southern California Institute of Law continue to attract students from all over.

Vocational institutions like the Brooks Institute of Photography, Music Academy of the West, Paul Mitchell The School remain popular for vocational training.

Television and radio stations along with print media continue to thrive here with a lot of content being created and broadcast from the city.

Places of interest in Santa Barbara

Tourism is a major attraction that generates over a $1 billion for the city. Visitors with an interest in performing and fine arts will find several options to explore.

The 2000-seat Arlington Theatre is a major attraction and also happens to be the official venue for the Santa Barbara International Film Festival. The towering 1924-built Granada Theatre continues to stand tall with a long standing history of hosting some of the most memorable performances.

Stearns Wharf along with the Ty Warner Sea Center near the harbor is a popular destination for tourists and visitors to hang out with enough entertainment options to spend the entire day and evening there.

Popular events through the year in Santa Barbara

The city hosts special events throughout the year and include: