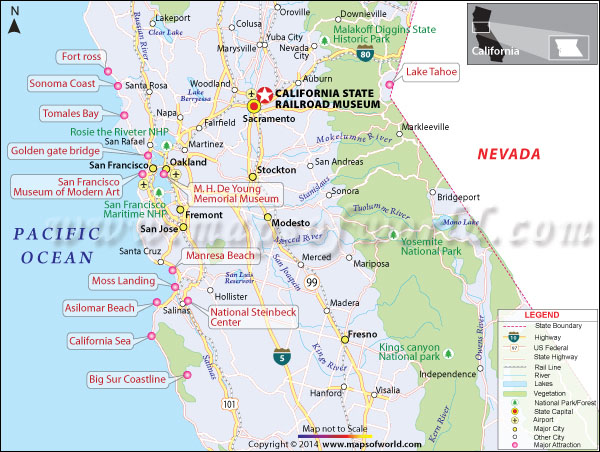 Opened in 1976 the California State Railroad Museum is a tribute to the role of the “iron horse”, which connected the state to the rest of the country. It features restored locomotives and vehicles dating back to 1862. This 100,000 square foot structure is solely dedicated to railroads, houses different kinds of steam engines and vehicles and the guides inside the museum have in-depth knowledge of the exhibits allowing for the visitors to ask all sorts of questions.

The museum excursion trains allow visitors to enjoy a ride behind an authentic locomotive and run from April to September. The 45-minute round trip along the Sacramento River is extremely relaxing coupled with sights, smells and the sounds of a real working locomotive.

The Railroad Museum also sells various kinds of items and there are souvenirs meant especially for children.

Visitors are permitted to take photos inside the building but heavy bulky camera equipment is not allowed. The museum is considered to be the finest railroad museum in the whole of North America.

Where Is California State Railroad Museum?

The California Railroad museum is located in Sacramento.

Summer season is the best time of the year to visit California. The state enjoys beautiful weather throughout the year but summer in particular is absolutely gorgeous in the region. Spring is a good time to visit as well. Although, it could get a bit cold at higher elevations, it would never become uncomfortable.

The museum is open to the public everyday from 10 am to 5 pm. It is closed on Thanksgiving, New Year’s and Christmas.

The ticket costs $10 for adults, $5 for children between the age of 6-17 and those under the age of 5 can enter for free. Payments are accepted in various forms including cash.