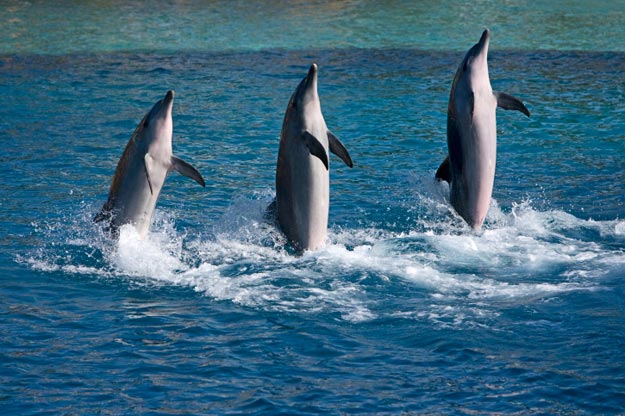 Watch Dolphins play at the SeaWorld in San Diego, CA

With roller coasters, water rides, and animal exhibits, SeaWorld is a popular destination for families to spend the day in San Diego, California. Various attractions at SeaWorld makes it one of the top visited destinations in the world.
The Bayside Skyride, a six-minute gondola ride takes you over part of Mission Bay on two 80-foot (24m) towers, and lands on the other side. The distance between these two towers is the longest out of any VonRoll Skyride ever built.
The SeaWorld Sky Tower was built in 1969. The ride rises at a speed of 150 feet per minute (46 m/min) while gyrating slowly (1.02 rpm) on the 320-foot tower to offer panoramic views of San Diego and the bay near the park.
The Journey to Atlantis attraction is a flume ride and roller coaster themed ride reminiscing the lost city of Atlantis. This ride makes you experience butterflies in your stomach. The ride exits in a large marine museum that houses Leopard sharks, Spotted eagle rays, Cownose rays and Southern stingrays.
The park’s raft ride, called Shipwreck Rapids, takes riders through the wild turtle exhibit and right through a waterfall, while Manta is SeaWorld’s biggest thrill ride.
Sesame Street’s Bay of Play area is based upon the children’s television series ‘Sesame Street.’ There are three interesting rides in this area: Abby’s Seastar Spin, Elmo’s Flying Fish and Oscar’s Rockin’ Eel.
At the Turtle Reef you can see over 60 turtles along with fishes in an oceanarium.
Animal exhibits at SeaWorld also include dolphins, killer whales, beluga whales, Pacific walruses, penguins, and polar bears. Animal interactions take place at Rocky Point Preserve in Dolphin Cove, where visitors can interact with dolphins, and California sea otters.

Also Read : 10 Fun things to do in San Diego

Where is Seaworld San Diego?

Located in San Diego, California, United States of America, SeaWorld is a Marine zoological theme park. SeaWorld can easily be reached by public transportation. You can call (619) 685-4900 to know the city trolley and bus schedules and routes. A lot of hotels offer complimentary shuttle service to SeaWorld. Around 290 daily inbound airline flights from San Diego Airport and 10 AMTRAK trains serve San Diego daily. 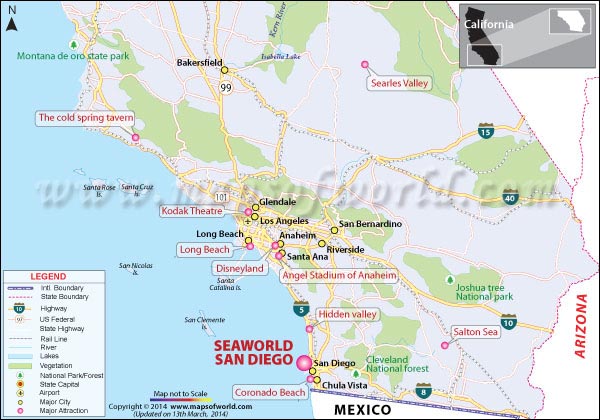 SeaWorld San Diego is open year round, but offers longer hours in the summer months. San Diego weather is great all year, but park visitors may find smaller crowds in the off-season.

A single day ticket for an adult is priced at $79 while a child’s ticket costs $71. The tickets are available under three broad categories viz. Visitor offers, Resident offers and Membership offers. A majority of discounts can be availed only via online booking.