Yosemite National Park Map - Yosemite National Park is a nature lover's paradise, with campsites and around 800 miles of hiking trails, making it one of the top destinations for outdoor adventures. You can also order National Geographic's customized map centered on your choice of location from here. 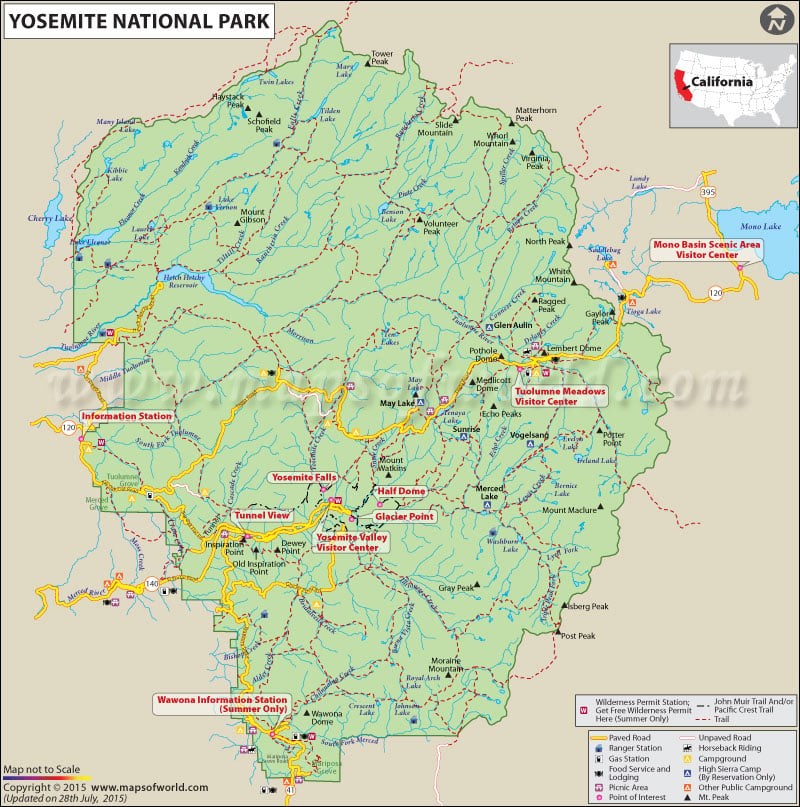 One of the first wilderness parks in the country, Yosemite is visited by nearly 4 million people each year, making it the third most visited National Park in the United States. Yosemite was established as a National Park in 1890 and has been a World Heritage site since 1984.

Yosemite National Park spans about 1200 square miles (3,107 square meters), of which about 95 percent is designated wilderness. The gorgeous landscapes of Yosemite Valley have a long history of inspiring visitors, including photographer Ansel Adams, whose famous photographs are still on display at the park. Yosemite’s landscape has been forming for millions of years, from the uplift of the Sierra Nevada about 10 million years ago, followed by streams and rivers carving out the deep canyons of the valley, and the glaciers accumulating about one million years back.

Located in central California, Yosemite National Park is home to a diverse ecosystem, with over 400 species of vertebrates, groves of giant sequoias, impressive granite cliffs, glaciers, and waterfalls. Yosemite Falls is the tallest waterfall in North America at 2,425 feet (739 meters), and Yosemite’s tallest peak is Mount Lyell at 13,114 feet (3,997 meters). The Tuolumne and Merced River begin in the park and flow through its valleys.

Summers in Yosemite are typically dry and hot, with an average high of around 90 degrees Fahrenheit and low of about 50 degrees. Campsites and lodging fill up months in advance, and the park is very busy during the summer months.

Spring and fall are sometimes snowy and rainy nearer to winter, and temperatures can range anywhere between 30 to 80 degrees. Spring is the best time to catch impressive waterfalls, when the snowpack in the Sierras begins to melt.

Winter in Yosemite is beautiful in its own right and often covered in a layer of snow. Though not practical for many campers or hikers, snowshoeing and cross-country skiing are common. Roads are often closed during winter storms, and tire chains are necessary. Winter temperatures in the Yosemite Valley drop to the 20s, with highs in the 60s on the rarer sunny days.

Yosemite is located in central California’s Sierra Nevada about 195 miles from San Francisco and 315 miles from Los Angeles. There are four entrances to the park: State Routes 120 from the east or west, and State Routes 140 and 41. There are no gas stations in the Yosemite Valley, so visitors should fill up before entering. Tire chains may be required from around October to April, and road closures do occur so check road conditions ahead of time.

Entrance fees to the park are $20 per car or $10 per pedestrian, bike, or motorcycle. Admission tickets are valid for one week.

SF Bay Area and LA area airports are much larger and offer more flights, but travelers will want to rent a car to drive to the park.

Merced – Amtrak offers service to Merced from all over California (Bakersfield, Sacramento, SF Bay Area). Amtrak also has a bus service between the train station and Yosemite. This route takes longer than driving.

You can also buy a customized map that you can crop out of National Geographic’s Topo basemap. You can select portrait or landscape orientation and order a high quality print from our online map store – MapTrove.com