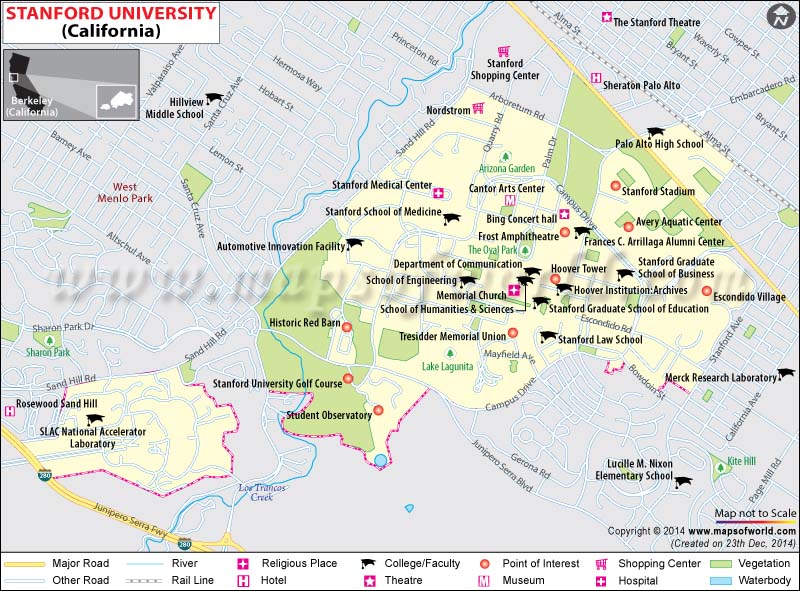 About Stanford University in Palo Alto 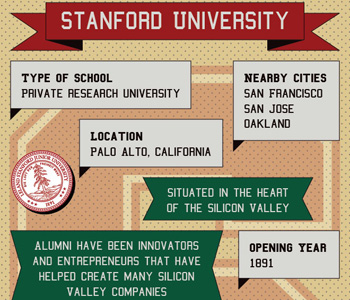 In a Nutshell
Next, MapsofWorld’s U.S. Universities tour moves across the country to our first West Coast school to visit Stanford University next to Palo Alto, California. A private research university situated in the heart of the Silicon Valley, Stanford has been an important part of some major inventions and innovations in modern society, especially in regards to computer science and medicine. The university’s alumni have been innovators and entrepreneurs that have helped create many Silicon Valley companies.

Stanford University was started by Leland Stanford, who moved from New York to California during the Gold Rush, and was one of the Big Four railroad tycoons who sponsored the construction of the transcontinental railroad. Stanford spent years planning for the school, which he wanted to model after the Ivy League schools of the Northeast. Stanford University was opened in 1891, but Leland Stanford died just two years later.

As a coeducational university from the start, Stanford has continued to teach a diverse mixture of students, and beats out the other top universities in this category. Almost 7,000 undergraduate students attend Stanford, with a faculty that includes some of the top researchers in their fields. Stanford, unlike the other top-level universities we’ve discussed, follows a quarter system, rather than a semester system.

Stanford boasts a selective admissions process, which admits students into one of several schools within the university. Humanities and Sciences, Engineering, and Earth Sciences each contain several departments of study within them, while Stanford also has graduate schools in medicine (with the associated prestigious hospital system), law, and business. Stanford’s medical center has seen the invention of many breakthrough technologies.

Stanford is consistently rated at the top of university lists, especially in regards to its humanities, arts, and science programs. These science programs range from health sciences to computer sciences, and even natural sciences. Stanford also has very strong engineering programs.

The majority of classes are small, ranging from two to twenty students, though there are many larger courses offered in a wide range of subjects.

Stanford’s tuition is comparable to the Ivy League schools we’ve discussed, at about $40,000 per year, with an additional $11,000 for room and board. About 80 percent of Stanford’s students receive some form of financial aid, and students who come from low-income families are given grants so they don’t have to take out loans to afford their education.

Social Scene
Stanford is one of the most diverse university communities as a minority-majority school. Stanford students represent all fifty states, 60 countries internationally, and all socioeconomic groups, adding to the educational experience at Stanford by bringing together a wide variety of perspectives.

Living on campus is required for incoming freshmen at Stanford, and almost all undergraduates continue to live in campus housing throughout their time at the university. About a quarter of Stanford’s students are members of a sorority or fraternity. Stanford is unusual in that it also offers faculty housing on campus, allowing them to easily bike to and from campus.

Stanford has a strong athletic program, as part of the NCAA Division I, and the Pac-12 Conference. Known for its football team, Stanford competes with its rival Cal (U.C. Berkeley) in an annual battle of the bay, providing for some exciting activities between the two schools.

Stanford emphasizes the importance of public service participation for its students, and has the Haas Center for Public Service to assist students in finding community service opportunities.

Where is Stanford University Located?

Stanford’s prime location between San Francisco and San Jose, right in the heart of Silicon Valley, makes it a great location for people interested in technology, innovation, research, and start-ups. Stanford has generated major tech companies like Hewlett-Packard and Google, which was started by Stanford graduate students as a research project.

The San Francisco Bay Area has much to offer students at Stanford, with several large cities in the vicinity and public transportation options to get around the bay. Stanford is located in Santa Clara county, in addition to the mid-sized city of Palo Alto, but other nearby cities like San Francisco, San Jose, and Oakland each give students various activities, dining and nightlife, and job opportunities for during and after their time at Stanford University. Stanford is located a short distance from beaches, wooded hills, and other scenic landscapes.

Stanford’s campus itself was carefully planned with style and functionality in mind. An especially bicycle friendly campus, many students and professors ride their bikes around campus in the designated bike lanes that traverse the school. Stanford’s campus was constructed in the Spanish-colonial style, typical of California architecture. Though some of the original buildings were destroyed in the earthquake of 1906,

Stanford is a great option for higher education that is located on the West Coast, as an alternative to the older and prestigious, but much less diverse Ivy League schools on the opposite side of the nation. Stanford’s location in Silicon Valley and the school’s atmosphere that is filled with the entrepreneurial spirit pushes the university to a top spot on our list of the best universities in the United States.