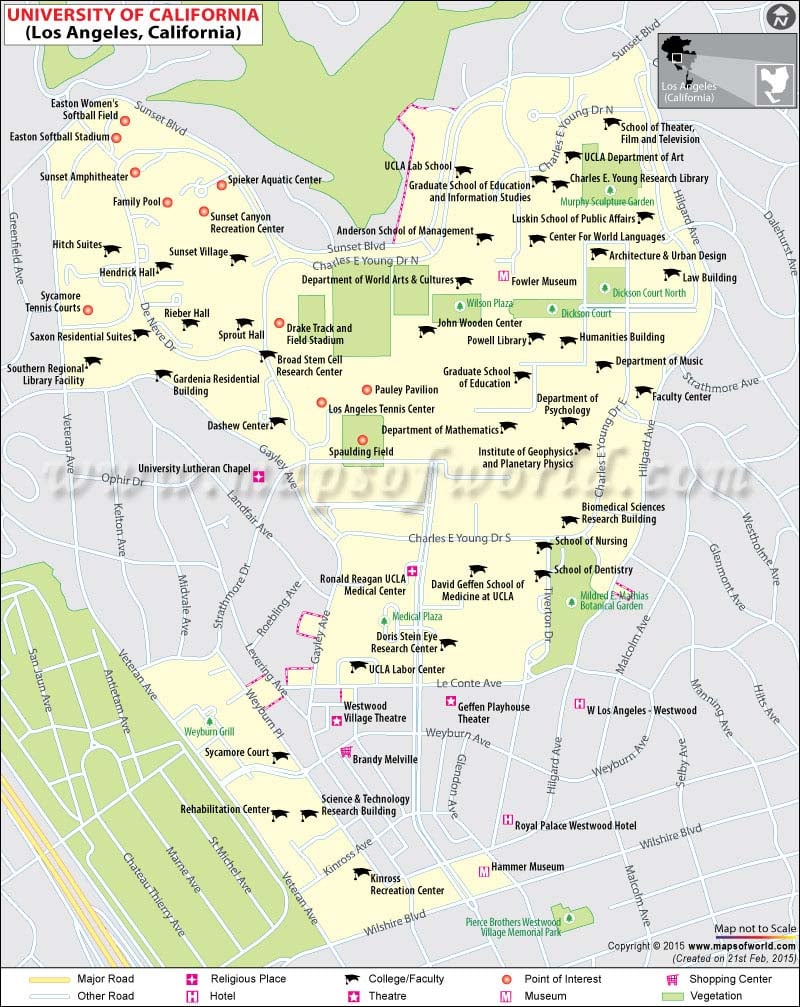 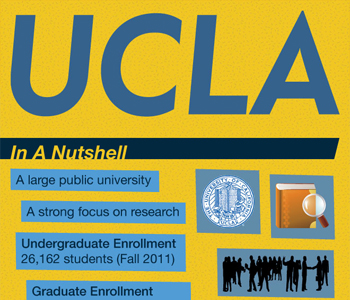 Click on the image to view the full Infographic

Founded in 1919 as the second campus of the University of California system, UCLA was first called the Southern Branch of the University of California. It was opened despite protests from many leaders associated with the original UC campus in Berkeley, who thought the university should not expand. When UCLA first opened, it offered a two-year undergraduate program in the College of Letters and Science and a Teacher’s College.

As the school grew rapidly, the campus moved to a new location with more room for expansion in 1925, relocating to its current location just west of Beverly Hills. With this, UCLA began expanding its programs in addition to its campus and student body, adding master’s and Ph.D. programs. Over time, it gained autonomy from the UC system around 1951 and could diverge from UC Berkeley in some ways. One example is that, unlike Berkeley, UCLA’s academic calendar follows a quarter rather than a semester system.

Where is the University of California, Los Angeles

UCLA is located in the Westwood neighborhood of Los Angeles, California. Nearby neighborhoods are Bel-Air and Beverly Hills, two of the ritziest parts of town. Los Angeles is home to a diverse, thriving culture with plenty to offer college students, like a lively nightlife and restaurant scene. For weekends, many entertainment options are found around the city, like live music, theater, other performances, award shows, and more. During the day, beaches, shopping, and much more are located just a short distance from the UCLA campus.

During the summer, Los Angeles offers a wide variety of opportunities to work with or intern with significant companies headquartered in the area.

UCLA has a widespread reputation as a great university with so much to offer, demonstrated by the fact that it receives more freshman applications than any other university in the United States. In 2011, UCLA received 61,517 applications, beating out Berkeley by almost 10,000 applicants. UCLA’s admission rate is about 25.3 percent, just below that of Berkeley, and the lowest rate for any public university in the United States.

Most undergraduate programs fall in the College of Letters and Science. Still, other schools at UCLA include the School of Engineering and Applied Science (among the top of its kind in the nation), the School of Theater, Film, and Television, and the School of Arts and Architecture. Almost 130 majors and 80 minors are offered to undergraduates in UCLA’s 109 academic departments. About 5,000 courses are offered, so there are plenty of options for students to choose from, especially for students who begin college undeclared.

UCLA has a student-to-faculty ratio of seventeen students to every one professor, though 68 percent of undergraduate classes have fewer than thirty students. UCLA rates among the top schools for its four-year graduation rate.

With its Student Research Program and independent study courses in most academic departments, UCLA boasts many undergraduate research opportunities. It is one of the top five universities in the United States regarding research funding. UCLA’s school of medicine and research hospital offer students access to research projects in the biomedical field. UCLA also has one of the largest academic library systems in the nation, which houses over eight million volumes.

Bang For Your Buck
The University of California system is one of the country’s top public universities. The best part of the University of California is that education comes at a reasonable price for California residents. In-state tuition at UCLA is $11,618 annually, but out-of-state students will have to add $22,878. Room and board, health insurance, books, and other supplies will add about $18,000 to that number, so the total in-state estimated costs are about $30,000, while non-residents will pay about $53,000 annually.

Social Scene
UCLA is one of the most diverse schools in terms of its student population, with students from many ethnic, cultural, and economic backgrounds,, and is considered at the top of the list for economic diversity among these top universities. While Californians make up the vast majority of UCLA students, students from all 50 states and about 100 countries attend this school.

About 94 percent of freshmen live on campus, and campus housing is guaranteed for three years. Many other options for housing exist right next to campus in the Westwood neighborhood of Los Angeles. Around sixty fraternities and sororities are active at UCLA, making up about 13 percent of the student body. About 1,000 student organizations exist at UCLA, with particular interests ranging from political, ethnic, and cultural groups to religious clubs and outdoor activities.

UCLA’s Education Abroad Program offers students at UCLA a chance to study at one of the 140 associated universities in 33 countries around the world or take on an international internship.

Sports are an essential part of the culture of UCLA, which has a traditional rivalry with its neighbor school, the University of Southern California. UCLA athletics, the Bruins, play in the NCAA Division I-A in the Pac-12 Conference.

UCLA is an excellent option for students in California looking for a more extensive public school experience with many extra opportunities to offer. UCLA comes at a low cost for California residents, but with financial assistance, it can be an excellent option for any student. Vital programs in the entertainment department, medical school, and engineering school make UCLA an academic competitor to the top universities in the country.