Where is Boston, Massachusetts

Where is Boston Located in USA 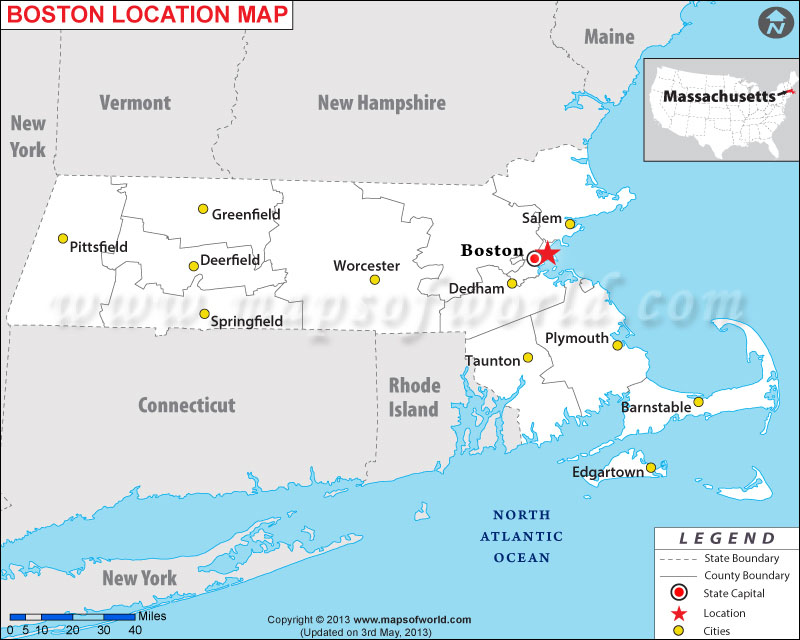 Boston is the capital and largest city in the Commonwealth of Massachusetts and also the largest city in New England region of USA. Known as The 'Cradle of Liberty', it is a city of venerable neighborhoods, of history intertwined with modernity, of New England literary icons referred as Boston Brahmins, and of American firsts—first public school, first library, first subway system, and first public park.


Fused with traditions and innovations, the 'City on the Hill' is the birthplace of American Revolution and the Boston Tea Party, home of the baked beans and the sacred cod, enclave of ethnically distinct immigrants, and home turf of Red Sox, Celtics, Bruins, and the Patriots.


Though they still adhere to blue laws, Bostonians – with their 'smaht' accent – are not inferior to New Yorkers in any way. In fact, the city is known as 'Athens of America' for its literary contributions and has earned a reputation as “the intellectual capital of the United States.”

Things to Do in Boston:

Watch a Red Sox Game at Bleacher Bar, visit observation deck at the Custom House for panoramic views of the city, take a sunset gondola ride on the Charles River, join a guided tour of Black Heritage Trail or Sam Adams Brewery, peek into outer space at Coit Observatory, loiter around at Copley Square or in Arnold Arboretum, enjoy a day out with kids at Castle Island, do some high-end shopping and gallery-hopping along Newbury Street, catch a summer concert at Hatch Shell, and go for biking and hiking in Blue Hills Reservation.


When to Visit Boston:

Boston Mayor says city will not welcome hate groups planning to hold rally
Martin Walsh, the Mayor of Boston, has made its clear that 'hate groups' planning to hold a rally in Boston will not be welcome by the city. Walsh comments came after the violence in the Virginian city of Charlottesville. One protestor was killed and 19 injured when a white supremacist rally in Charlottesville turned violent. The Mayor maintained that a group of far-right activists planning to organize a rally in the city on Saturday had not filed for any permit.