Where is Cincinnati, Ohio

Where is Cincinnati, OH Located in USA 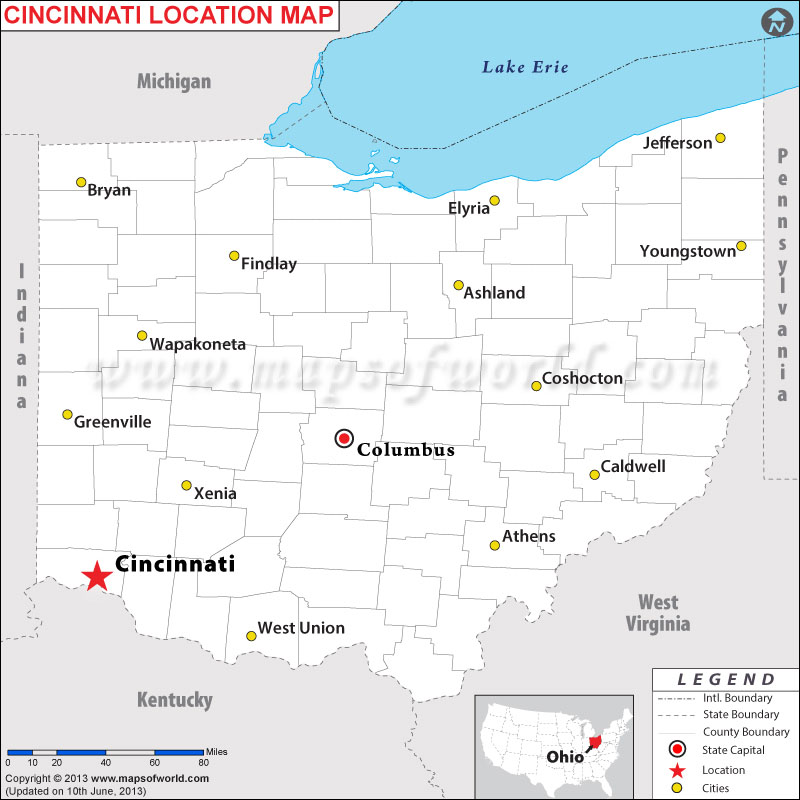 Cheerful. Thriving. Animated. First major metropolis founded after the American Revolution, Cincinnati at the first glance seems as enthusiastic as a teenager. From distinct culture to vibrant lifestyle, everything in 'Queen City' leans toward liberalism except politics. With meadow-marked countryside and rolling hills only a few minutes away, there's more to Cincinnati than meets the eye.

Situated on the north bank of the Ohio River, Cincinnati is in the bluegrass region of southwestern Ohio. It is about 107 miles from Columbus and 240 miles from Cleveland.

Late spring around May or early fall around September are ideal seasons to visit Cincinnati. For those who can bear with humidity, festivals and concerts in summer are a treat.

Most attractions in the city are focused around Fountain Square. The American Classical Music Hall of Fame, Cincinnati Art Museum, Cincinnati Fire Museum, and National Underground Railroad Freedom Center are the most visited places in the city. The Cincinnati Skywalk is a labyrinth of walkways which traverse downtown.

Opened in 1875, Cincinnati Zoo and Botanical Garden, in Avondale neighborhood, is the second oldest Zoo in America. Put on a poker face at Jack Cincinnati Casino, watch beautiful cityscape from Carew Tower and Observation Deck, set a date with stars at Cincinnati Observatory Center, or go for a walk in Spring Grove Cemetery and Arboretum, the choices are aplenty.

Annual festivals like Bockfest and Oktoberfest Zinzinnati show that German and Irish heritage is still prevalent in the Midwestern culture of Cincinnati. Pick up the tab for a stranger in Arnold's Bar and Grill or sample local delicacies like Cincinnati chili and German-inspired Goetta.