Where is Charlotte, North Carolina 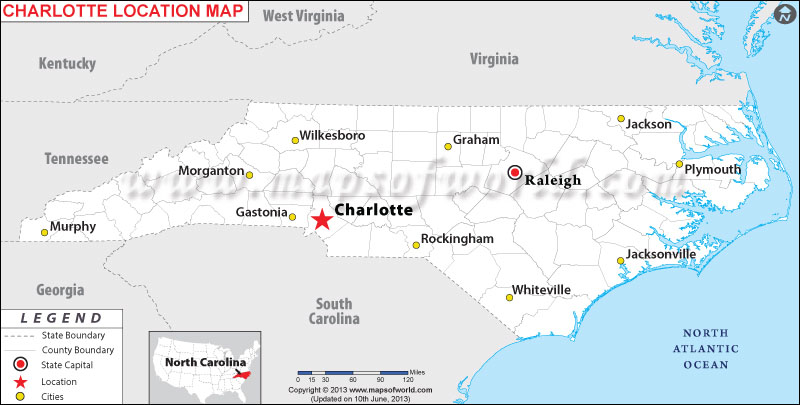 Referred to as 'Queen City', Charlotte is the largest city in the state of North Carolina. From hip boutiques of Plaza Midwood to textile mills of the NoDa, it is an ambitious city with touch of down-home vibe.

Charlotte is located in the Piedmont region of North Carolina in the eastern United States.

By Air – Charlotte Douglas International Airport (CLT) is a gateway to North Carolina.

By Road – The Charlotte Area Transit System (CATS) provides mass transit in the city. Two interstate highways I-85 and I-77 intersect near downtown.

In fall (specifically September and October), best deals on hotels can be availed and city is less crowded. Spring is another time to visit Charlotte as temperatures are mild and festivals abound.

Home to the corporate headquarters of Bank of America, Charlotte is the second largest banking center in the US after New York.

Even though it's a business town, art and history lovers shouldn’t despair. The ultramodern Uptown district houses the Discovery Place and the Mint Museum. The Charlotte Museum of History features collections related to region's history and the NASCAR Hall of Fame attracts car enthusiasts from all over the country.