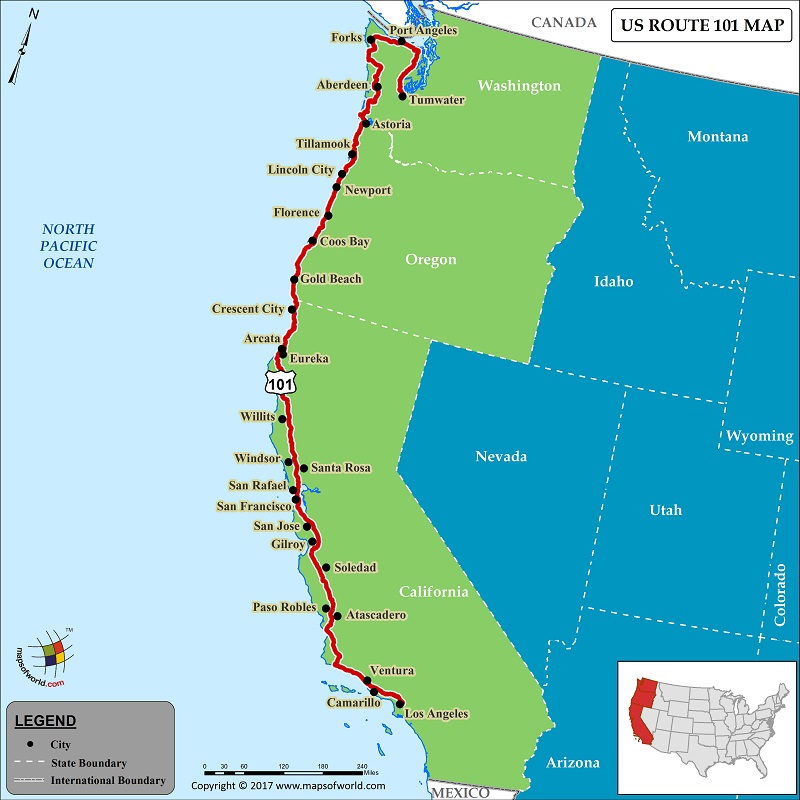 US Route 101 is a 1,540 mile-long route located in the western United States. A north-south United States Numbered Highway, US Route 101 connects the Pacific three states of California, Oregon, and Washington. While the northern terminus of 101 is located in Tumwater, Washington, the southern terminus is in east Los Angeles CA, which happens to be the world's busiest freeway interchange. Since the highway's route along central and south California approximates the ‘old trail,’ that connected the Spanish pueblos, missions, and presidios, thus it is also referred as ‘El Camino Real,’ or The Royal Road, in southern California.


Apart from Los Angeles and Tumwater, some other cities that US Route 101 passes through are Ventura, Santa Barbara, San Jose, San Francisco, Santa Rosa, Windsor, Eureka, Gold Beach, Florence, Newport, and others. Some major junctions that connect US Route 101, are I-5/I-10 in Los Angeles, I-80 in San Francisco, US 199 in Crescent City, CA, US 20 in Newport, OR, US 26 in Seaside, OR, US 30 in Astoria, OR, US 12 in Aberdeen, WA, and I-5 in Olympia, WA.

US Route 101, or just 101, has become a part of the American culture, and finds references in many songs. Highway 101, an American country music band, owes its name to the route. ‘The Cheers,’ an American rock band, recorded songs titled "Black Denim Trousers and Motorcycle Boots." The songs were about a motorcycle rider who was referred as 'the terror of Highway 101.’ The highway is also featured in Cruis'n USA, an arcade racing game.