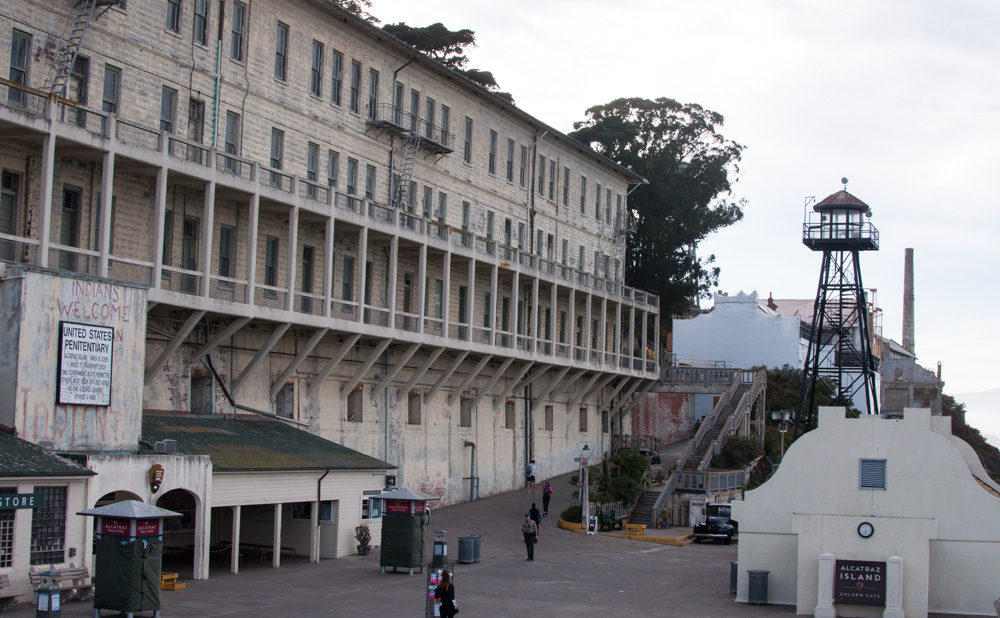 Once we arrived on Alcatraz, we were free to explore the 22 acres of the island at our leisure. Ferries back to San Francisco depart every 30 minutes and we were free to take any of them before 6:30 pm. In the chaos off the boat, the rangers announced the day’s programs and directed us to note the programming schedule and return ferry schedule. A kiosk offered a guide with an island map for $1, which has some great information and a helpful map for those interested in reading about the island’s history and each of its buildings.

We could have watched a 17 minute introductory video inside (most everyone skipped it, though a few watched it on their way out, before catching the ferry back). Instead we chose to head up to the top of the hill to begin the audio tour of the cellhouse. We joined the ranger-guided walking tour called “200 Years of Alcatraz History,” and let park ranger Tom Ryan guide us up the hill. This tour was one of the highlights of the day, thanks to the fascinating history and humorous anecdotes shared by our guide. Tom gave us an in-depth and entertaining overview of the island’s start as a military fort with a sally port and numerous cannons at the ready to protect the San Francisco Bay in the 1850s. The rocky island was named the Isle of the Pelicans (La Isla de los Alcatraces) by Spanish explorers because of the many birds that occupied it. Alcatraz was also the site of the first lighthouse on the Pacific coast of the United States. Its time as a fort, however, was short lived (and uneventful), and it was used as a military prison instead, holding convicted soldiers, Native Americans captured during the Indian wars, and protesters of World War I.

During the Great Depression, when organized crime was at its peak in the United States, Alcatraz Island was transferred to Department of Justice to become U.S. Penitentiary Alcatraz in 1934. Alcatraz held infamous criminals such as Al “Scarface” Capone, George “Machine Gun” Kelly, Alvin “Creepy” Karpis, “Doc” Barker, and “the Birdman of Alcatraz,” Robert Stroud (you can tell they’re the worst by the nicknames). The inmates that were brought to Alcatraz were some of the toughest, most violent criminals along with those who had escaped from other prisons. Alcatraz has since been considered one of the most notorious prisons in the United States, though today, others like Rikers Island give Alcatraz a run for its money.

Our guide told us stories about the other buildings on the island as we passed them, including stories that are not covered in the audio tour of the cellhouse. We learned that the families of guards also lived on the island in the old military barracks. The children took boats to school in the city every morning. The families often bought bread baked by the inmates and had their laundry done there, too. Some of the gardens on the island were tended by the children as part of their chores. Our guide made living on Alcatraz sound fun (as a non-inmate, at least), describing how residents had community events like dances and Christmas parties and even a bowling alley.

The federal penitentiary on Alcatraz closed after 29 years in 1963, due to the high costs of running a prison on an island, and because Attorney General Robert F. Kennedy likely did not want the negative association with Alcatraz, our guide theorized. 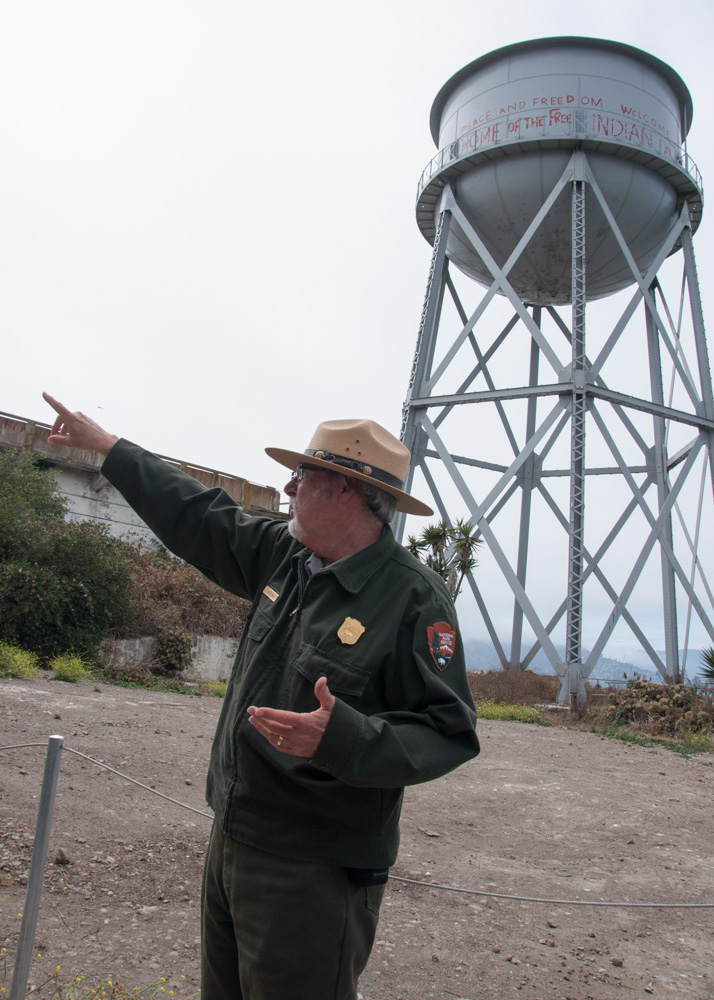 As we stood below the water tower, the park ranger pointed out the red writing across the structure, which read “Home of the Free” and “Welcome Indians.” Similar messages had been scrawled across the sign at the island’s docks, one of the first sights upon landing, remnants from the Occupation of Alcatraz in the 60s. A woman behind me, utterly confused, questioned her husband, “Indians? Here?” while her husband tried desperately to quiet her. I can only imagine she was picturing troops from India invading San Francisco via Alcatraz Island. The guide politely withheld his laughter and explained that after the federal prison was closed, the island was occupied by groups of Native American protestors first briefly in 1964, and for 19 months beginning in 1969. The group made major strides in changing the relationship between the federal government and Indians in the act, which Tom suggested would be one of the lasting legacies of Alcatraz.

He also explained that Alcatraz almost did not become a national park – authorities had planned to open the park to visitors briefly, before shutting it down and bulldozing the whole thing to make room for something else. But the public kept coming to visit, so they made it a permanent attraction. Now 1.5 million visitors travel to Alcatraz every year.

Before we knew it, we’d finished the hike and had arrived at the top of the hill, ready to begin the audio tour of the cellhouse. 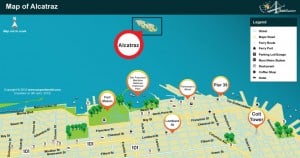