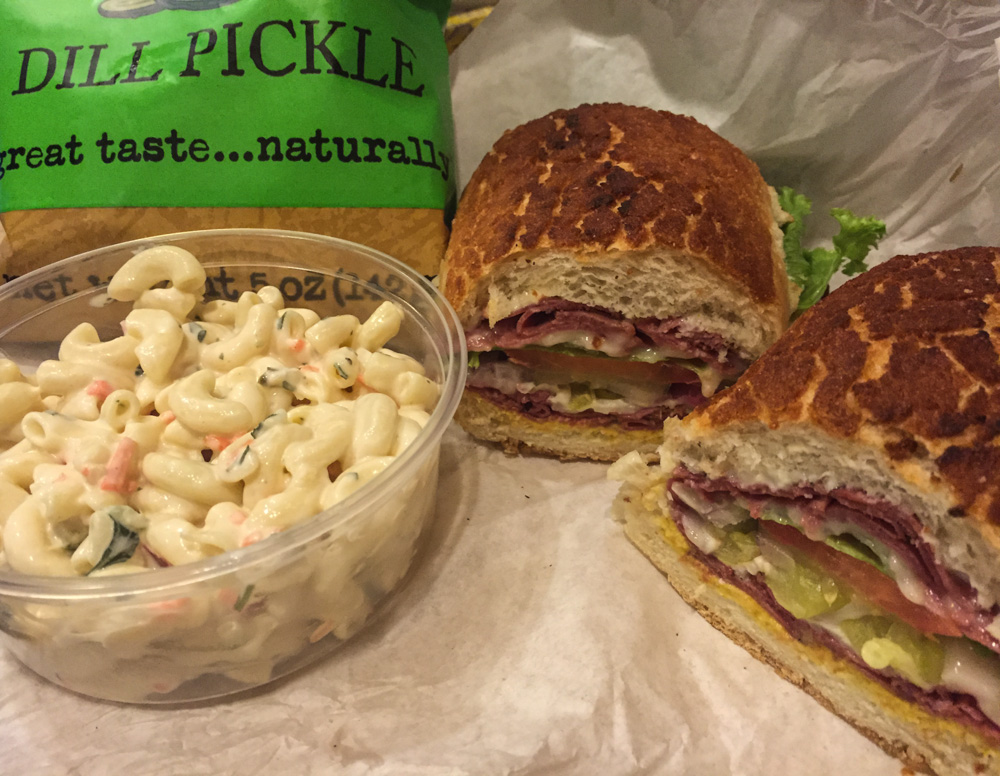 Lucca Foods Store features a deli tucked away inside the tiny neighborhood market, which offers high quality sandwiches and everything you need to pack an amazing picnic for lunchtime in Golden Gate Park. Not only are there a variety of hot and cold deli sandwiches, but there’s an incredible selection of beer and snacks to go along with them.

Though it looks like an ordinary liquor store, Lucca Foods has a few features that set it apart. Aside from the deli, my favorite thing about this store is the great section of imported candy, cookies, and chips. I saw a variety of Cadbury, Ritter Sport, Haribo, and Kinder candies, including some rare finds in the United States (like Kinder Surprise and Tim Tams).

The shop has been around since 1927, and has become a significant part of the neighborhood. The community loves Lucca Foods, too, and has helped them win Best Deli and Best Liquor Store on multiple lists.

Lucca Foods is situated about a block from Golden Gate Park’s 19th Street entrance, in the Outer Sunset district. Its location is a short walk from some of the park’s popular spots to hang out, including Stow Lake and Strawberry Hill, making it super convenient to grab some grub before you go.

I almost walked away from this place when I saw it from across the street. It’s a typical neighborhood minimart, inside and out. I would call the ambiance: literally a liquor store. 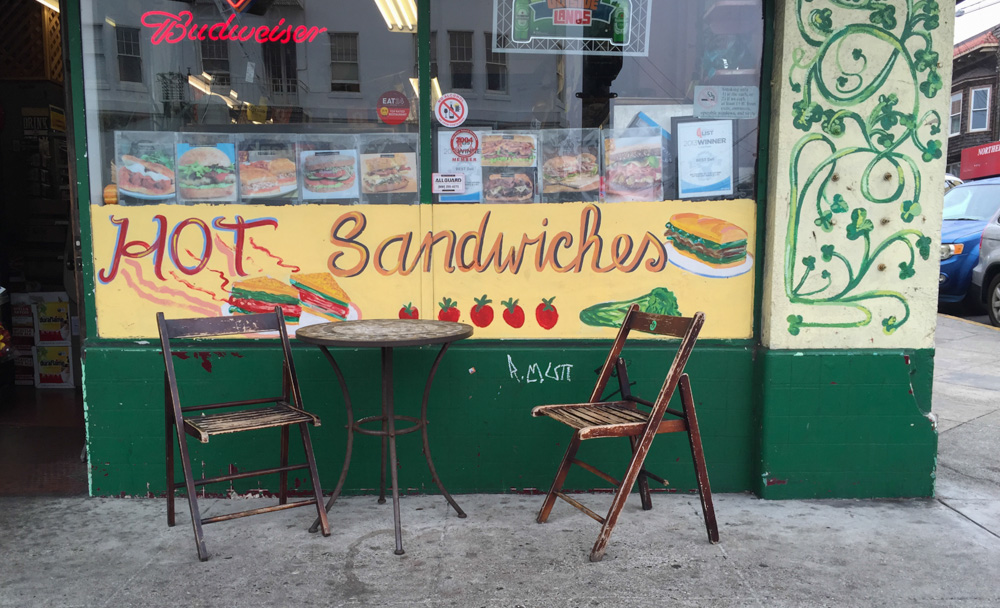 It doesn’t look like much, but someday maybe we’ll finally internalize the idea that you can’t judge a book by its cover. Out in front of the shop, two small tables with a couple of chairs are set up on each side of the door, in case you want to eat your sandwiches there on the loud, busy street, but you’re a block from the beauty and serenity of Golden Gate Park, so they won’t be necessary.

Inside, you’re immediately greeted by this guy:

The Most Interesting Man in the World approves

The deli counter is just inside the doorway, opposite a wall of interesting candy and imported snacks to peruse while you wait. The aisle is narrow, as is the one other aisle in this market, where you’ll find an impressive selection of craft beer. Past the deli counter, the wall is lined with shelves of liquor from floor to ceiling. Good use of vertical space, but kind of claustrophobic.

For some reason, I guess because this deli is inside a liquor store, I wasn’t expecting much in the way of customer service. Both of the employees were friendly and helpful, and the deli guy was happy to help with some sandwich recommendations.

The prices for sandwiches at Lucca Food are on the higher end when compared to places like Subway, but much cheaper when compared to Ike’s Place, for example. Sandwiches range from around $6-9, with charges of 50 cents to $1 for extras like avocado. The sandwich prices have gone up recently, so those listed on their website do not reflect the current prices. As for the other products in the store, they did seem a bit on the high side compared to a regular grocery store, but that’s expected of small convenience stores like this.

I had forgotten how much I love deli sandwiches before I came here, and these really hit the spot. You can’t even compare real deli sandwiches to those chain places, but if you’re looking for a Subway replacement after the Jared fiasco, I’ve found one for you.

Lucca’s deli offers a good variety of both hot and cold deli sandwiches, from the classic Italian Combo to Lucca’s Delight, a sandwich with turkey, roast beef, cheese. There are many types of meat available, including several types of salami (Genoa, Italian, and Spicy Italian) as well as prosciutto, coppa (capicola) and mortadella, chicken, roast beef, meat balls and even meat loaf. They’ve got vegetarians covered as well, with a cheese and veggie sandwich, featuring avocado, sprouts, cucumbers, and more. 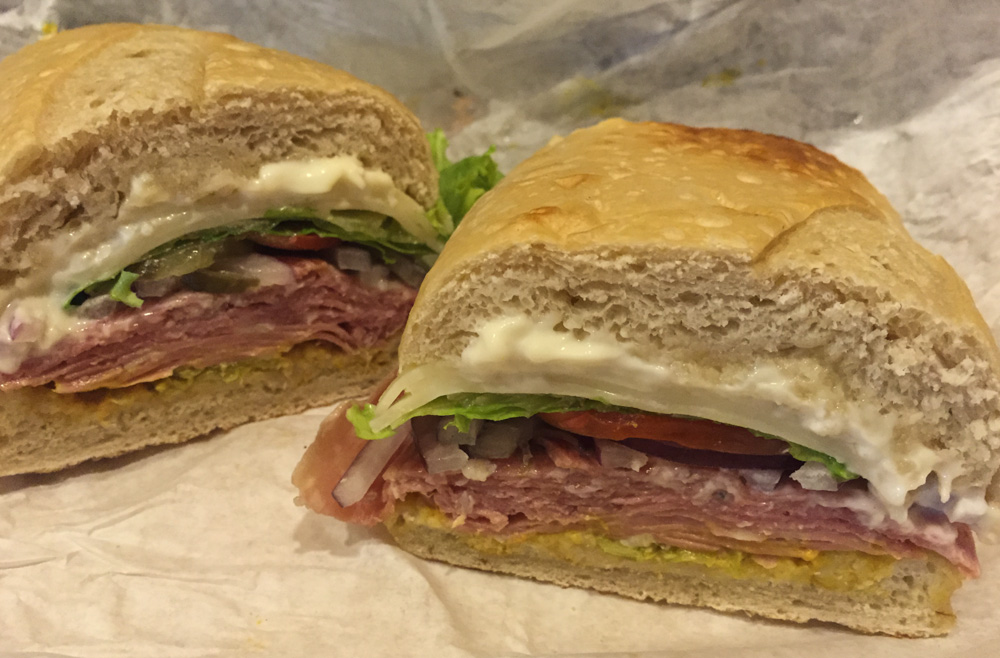 You can make up your own combination, but I like to try the ones the deli creates instead, and there were so many good ones to choose from. I picked up an Italian combo on a sourdough roll with everything (including peppers, the best part) and a hot pastrami on the Dutch Crunch roll with Monterey Jack cheese and everything on it. We also got some macaroni salad, and couldn’t resist adding a few of the interesting snacks we saw while we waited, including a Cadbury Flake bar and some dill pickle potato chips. Our picnic spread was complete.

The sandwiches were fairly large and could be split between two people if you’re adding chips and sides to the meal. The meat portions were decent, though there could have been more pastrami, and there was a little too much mayo for my liking. The bread is what took the sandwiches from good to great: fresh and just soft enough to make eating the sandwich easy. The macaroni salad had a great ratio of mayo to noodle (AKA not too much mayo) and was well seasoned.

Overall, the picnic meal from Lucca Foods helped make for a perfect Sunday afternoon with friends in Golden Gate Park.