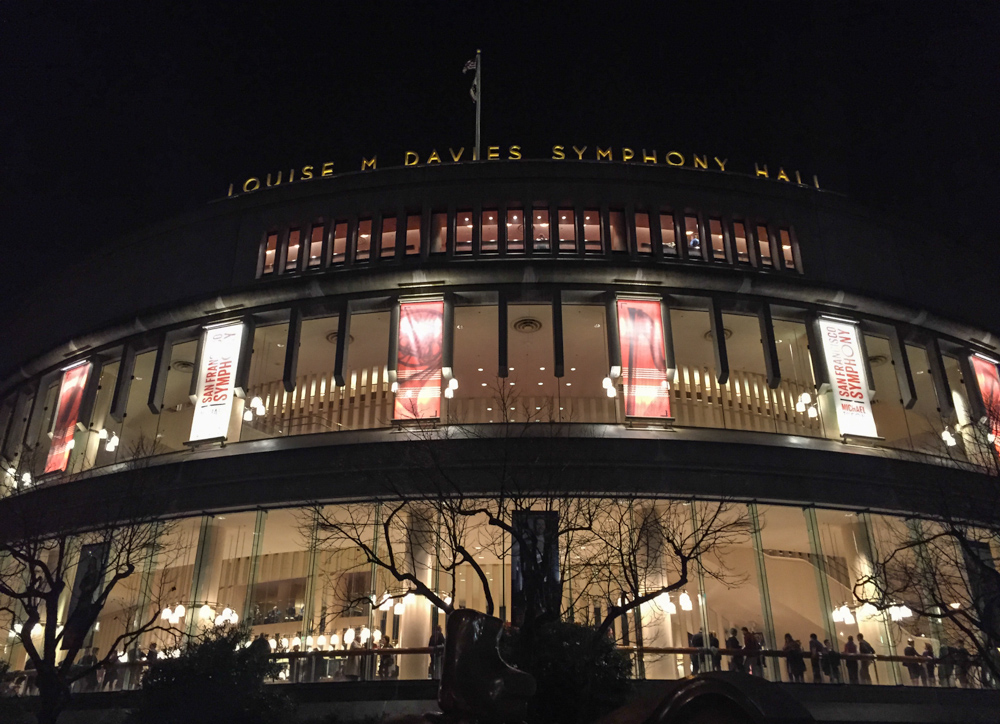 The San Francisco Symphony has won numerous Grammy Awards, including one in 2001 for a performance with Metallica. The orchestra has created several commercial recordings as well as DVDs, including its Keeping Score with MTT, which has been broadcast on PBS.

I recently attended a symphony performance on a rainy Friday evening. I found the performance to be the perfect way to finish off a work week, as it was a very relaxing – even meditative – experience. The lights remain on, but dimmed in the audience, and since there’s no real storyline to follow (unless you’re able to interpret the story of the music pieces just from listening to them, or with some prior knowledge you know what they’re about), you can just allow yourself to be mesmerized by the music and the synchronized movement of the bows across the strings, and the sharp movements of the conductor as he ushers in each section for their parts.

The seats are comfortable and spacious. I didn’t feel crammed in like we did at the War Memorial Opera House across the way, where the San Francisco Symphony used to perform, sharing the performing arts center with the San Francisco Opera. 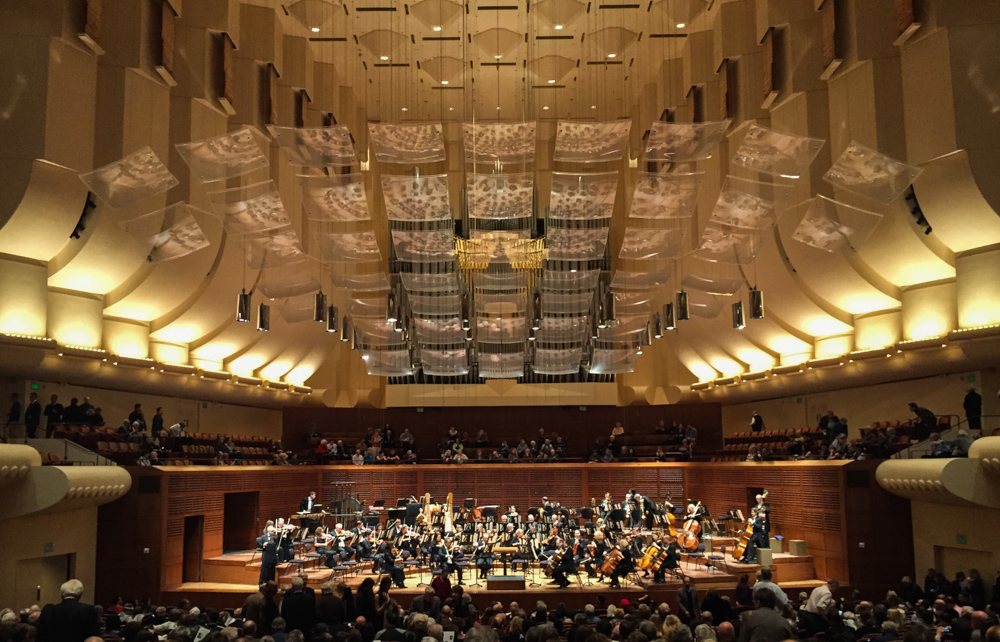 The acoustics in the auditorium are good, primarily due to the reflective acrylic panels arranged over the stage. These hanging shields and other sound diffusing elements can be rearranged depending on the particular orchestra set up and the size of the audience in order to strike the right balance and adjust the sound quality. The interesting architecture was carefully designed and thought out, but the first attempt at this was unsuccessful and the whole thing had to be redesigned in the 1992 renovation.

The theater is fairly large, seating 2,743, but still feels intimate and it’s small enough that I don’t think there’s a bad seat in the house. We could see quite well from our seats a few rows from the back on the orchestra level.

But the theater was not especially crowded on a Friday night – in fact, we were able to purchase a group of six rush rear orchestra tickets for $20 each on the same afternoon of the performance, which I can only attribute to the idea that maybe the symphony doesn’t appeal to everyone. While it’s a great way to get acquainted with some of the important composers throughout history, classical music may not be everyone’s cup of tea.

Of course, the San Francisco Symphony handily combats this idea with its unique and diverse programming. In addition to its regular performances of classical music, the San Francisco Symphony is known for its film series, in which the orchestra provides a live soundtrack to screenings of some of the most popular movies ever. The orchestra gives new life to old movies, like a few they’ll take on in 2016, including E.T. and Alfred Hitchcock’s Vertigo, which holds a special place in the hearts of many San Franciscans as much of the movie is set in the city.

With past films like Star Wars and Back to the Future, these performances have sold out quickly. The film series at the San Francisco Symphony is a great introduction to the orchestra, making the experience even more accessible to those who may not be familiar with much classical music, and may lead to encouraging more of us to get acquainted with the work of composers like Weber, for instance.

Those who are interested in learning about the music and its composers before they attend the show, there’s typically a free “Inside Music Talk” on the stage, about an hour before each concert begins.

The show I attended featured four pieces conducted by Edwin Outwater, with an intermission between the first two and the last two. The first piece was Weber’s Overture to Oberon, from the opera Oberon, which was first performed in 1826. The Overture features a lovely clarinet solo accompanied by the strings, other woodwinds, brass and timpani.

This was followed by my favorite piece of the evening. Just before the intermission, the Saint-Saens piece, Piano Concerto Number 5 in F major, Opus 103, a grand piano rose from beneath the stage and we were treated to a piano performance by guest artist Stephen Hough. Hough performed the piano concerto with the accompaniment of the orchestra. When he finished and took his bow, the audience gave him a standing ovation, and he was encouraged to return to the piano to perform a solo encore. His performance was beautiful, I only wished there were cameras positioned so that we could watch his hands as he played.

After the intermission, we heard an excerpt of Busoni’s Turandot Suite followed by Paul Hindemith’s Symphonic Metamorphosis on Themes of Weber to round out the evening. Some say the piece is the result of Hindemith spicing up some of Weber’s work for the American audience, so it’s fair to say that the March was an entertaining grand finale for the symphony’s performance that evening.

Though my friends and I did not come to the performance with much musical knowledge experience (other than a few failed clarinetists in the bunch), the experience was certainly enjoyable. The playbill we were handed as we entered provided detailed descriptions of each piece and composer, helping explain the story lines and the chronology of whole set (they were played in chronological order).

One note for symphony first-timers: It is typical to applaud at the end of each piece, but many of the pieces are divided into movements (listed in the Playbill), after which there will be a brief pause in which they prepare to begin the next movement. Do not applaud between movements of the same piece, because you will be the only one clapping. And no, it wasn’t me!

Sunday: 2 Hours prior to concerts

Take BART to Civic Center station and walk straight down Grove Street or drive to the Civic Center Garage for $5 flat rate parking (on certain nights). Another nearby garage is the Performing Arts Garage on Grove.