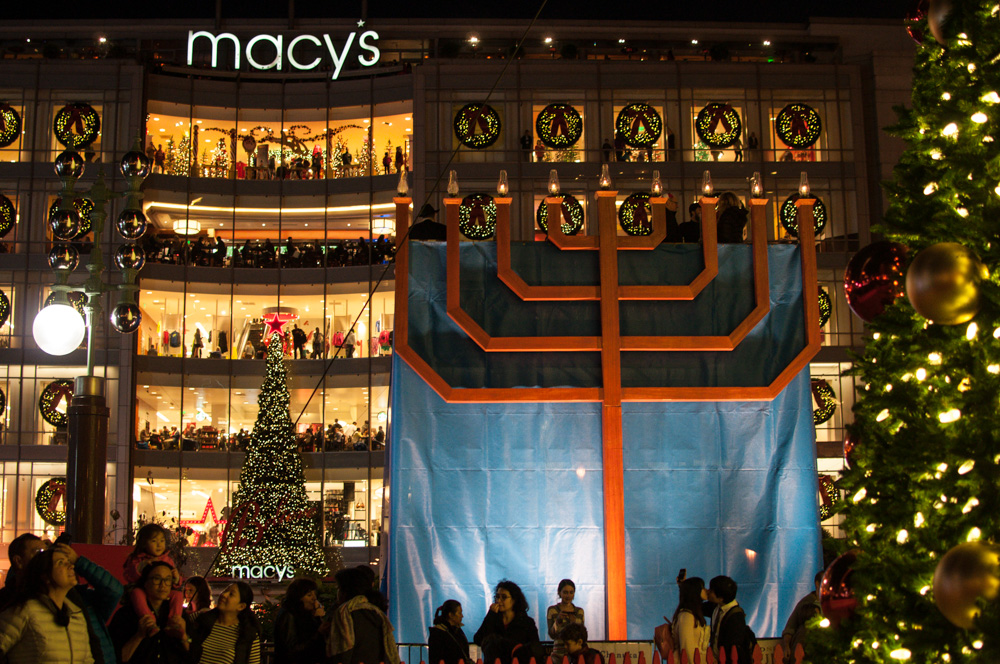 Though Hanukkah celebrations last eight days and Christmas lasts just one (arguably two), Christmas events take over the whole month of December, and have gradually been creeping up through November. Meanwhile, Hanukkah gets overshadowed by Christmas and its weeks of decorations and festivities, and San Francisco’s largest Hanukkah celebration at Union Square is no exception. Its impressive 22-foot tall and 15-foot wide mahogany menorah quite literally stands in the shadows of the giant Union Square Christmas tree. There’s a fantastic series of events for the menorah lighting ceremonies in the square, but they’re sort of wedged in there between all the Christmas stuff like an afterthought, even though these festivities have been held here for almost 40 years.

The San Francisco menorah lighting became the first public Hanukkah celebration outside of Israel in 1975, and has since expanded to 500 cities around the world. Thanks to the efforts of San Francisco Jewish community leaders and the support of concert promoter Bill Graham, who fled Europe as a child during the Holocaust and later became a prominent public figure in San Francisco, the menorah continues to shine in Union Square each year during Hanukkah for the Bill Graham Menorah Festival of Lights. The huge menorah is known as the “Mama Menorah” because it has inspired so many others to commune in public spaces around the world to participate in lighting the menorah.

A lighting ceremony takes place each night of Hanukkah, with special guest appearances some nights, especially the first and last of the eight days. The first Sunday of Hanukkah every year is celebrated as Bill Graham Menorah Day, honoring the supporter with a special Hanukkah celebration with music and other entertainment in addition to lighting the menorah. The event has featured a variety of acts and musical guests including Carlos Santana. 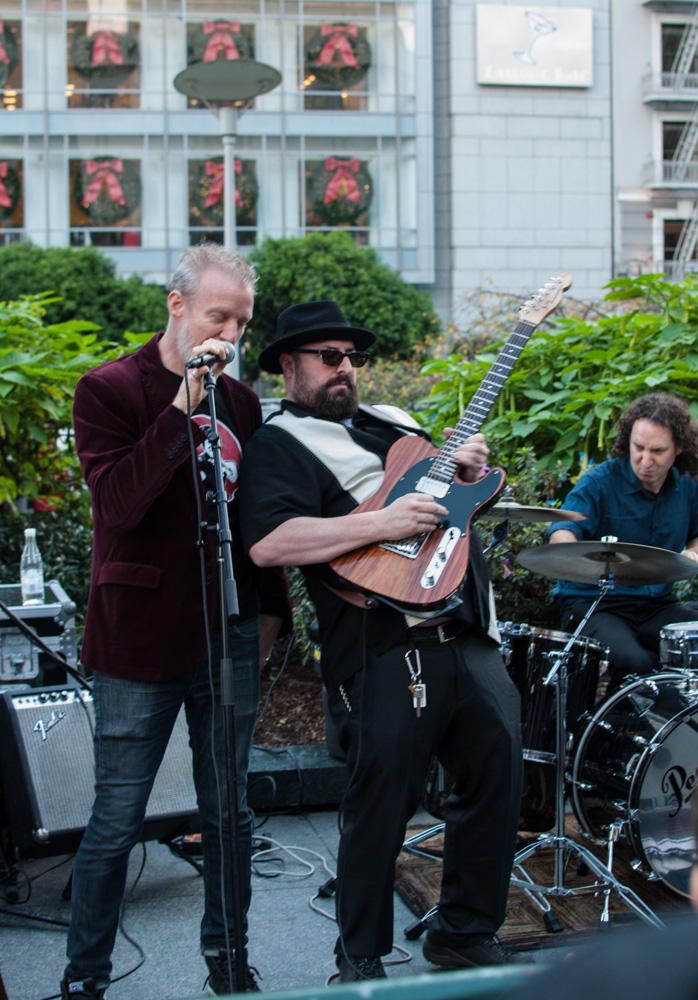 In 2014, the Bill Graham Menorah Day celebration featured music from Jerry’s Kosher Deli, a Bay Area band with a keyboardist who looked suspiciously like Jimmy Kimmel. There was a special appearance from the lead singer of the Spin Doctors, Chris Barron, who joined the band for two songs, one of which was fortunately the one hit of theirs I know, “Two Princes.” 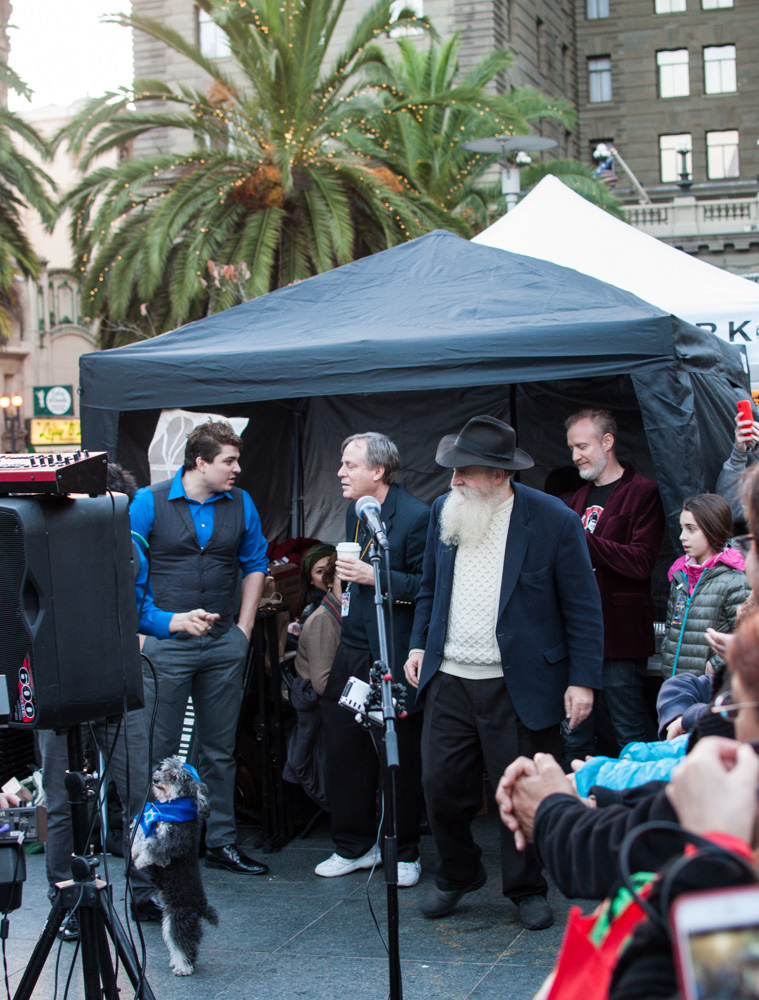 Rabbi Langer, Chris Barron, and the Olate family and dogs in the tiny performance space

Next came a performance from the Olate Dogs, the act that won America’s Got Talent in 2012. The adorable dog group performed a routine of tricks like jumping rope and dancing. It was a great show – or at least I assume it was. Despite my front row view, one of the show’s organizers stood in front, recording the short show on his phone and blocking the view for me and the row of kids in front of me. The view was limited as it was, before were left watching it on his tiny phone screen, and the kids seemed bored with what should have been a really fun show for them (OK, and me).

It left me wondering why they didn’t have any sort of stage. The performance area for the show was at ground level and arranged around a fat light pole, with only a narrow walkway for the audience to stand. Even near the front, it was difficult to seeing everything, so anyone more than a few rows back would not be able to see at all. 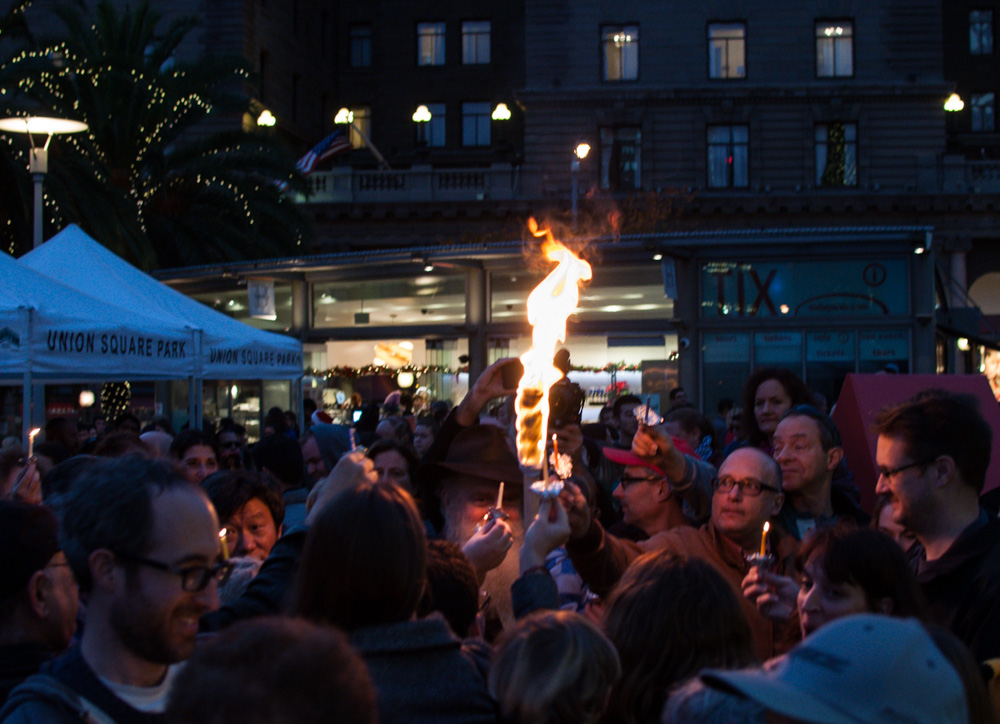 Rabbi Langer carries the torch through the crowd

Around 4:30 pm, when these events were finished and the sky was getting dark, the Rabbi Yosef Langer began the lighting ceremony. Throughout the earlier festivities, the rabbi could be seen dancing and rallying the crowds to sing along. He was charismatic and fascinating, with his long white beard, black hat, and sick dance moves. He spoke warmly reciting blessings in a ceremony that was inclusive and uplifting, and then carried the blazing torch through the crowd, allowing each of us to light our small candles in its fire. We watched and guarded our flames from the wind as he made his way through the far ends of crowd before he climbed up the giant menorah to light its lanterns and sing hymns.

Though the menorah itself has a prominent location, standing side by side with the Christmas tree and holding its own against the other holiday decorations, the viewing areas and angles for the Hanukkah festivities were very limited. A stage would be a simple solution. To be fair, there is a lot of holiday stuff happening in a relatively small space, but maybe the Christmas tree could scoot over a little to make room (and I say this as someone who loves Christmas).

Those complaints aside, the Bill Graham Day ceremony was warm and welcoming and pretty much the exact opposite of the commercialized Christmas tree lighting ceremony over at Pier 39. No one yelled at us to keep moving or told us there wasn’t space for everyone – they made space, and the people spilled out into whatever open spaces they could find. The crowd was diverse, with plenty of non-Jews, and no one cared; they just smiled and reached out to share their flame when another blew out in the wind. And despite Macy’s and Tiffany and Saks looming over us and the enormous billboard advertising the latest iPhone, there wasn’t a hint of commercialization in the ceremony. Just spirited celebrations, a strong sense of community, and positive vibes – and a good reminder what the holiday season is supposed to be about. 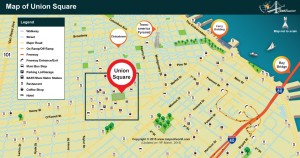