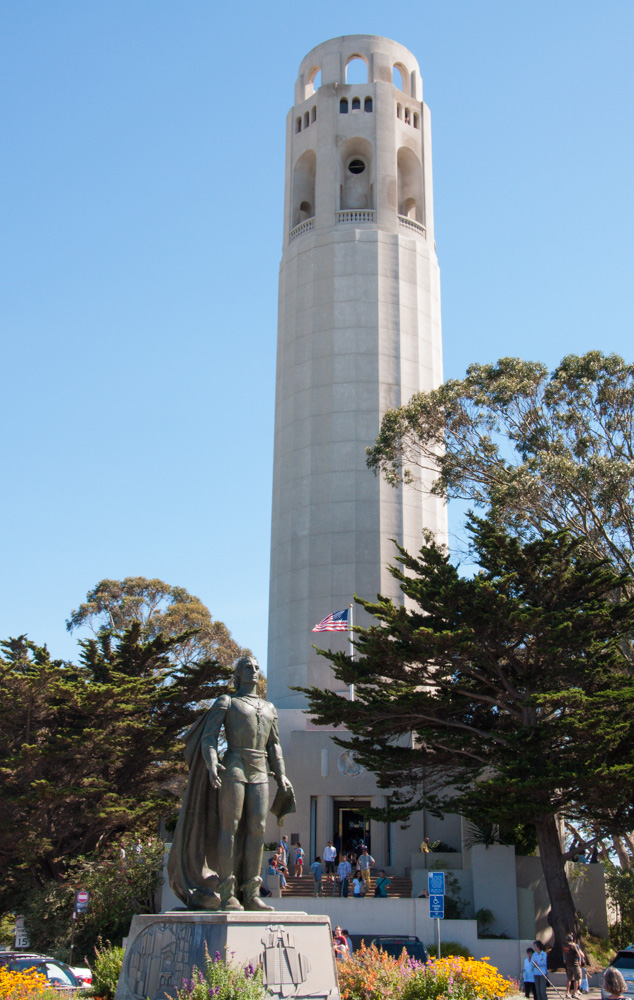 Coit Tower and the Columbus statue

A prominent monument in the San Francisco skyline, Coit Tower offers panoramic views of the whole city. Set atop Telegraph Hill between the Fisherman’s Wharf area and North Beach, Coit Tower can be seen from all around San Francisco. 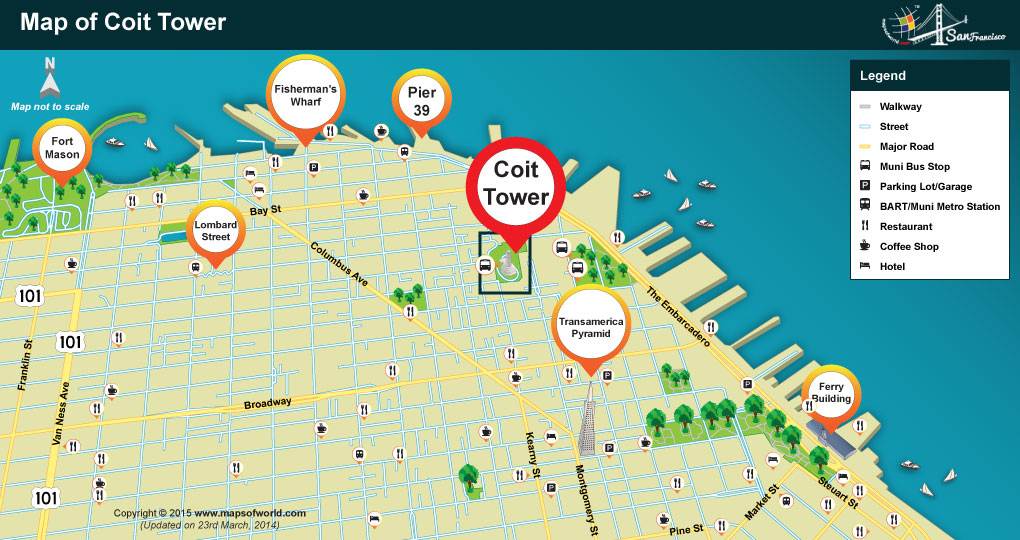 Features of the Coit Tower

The climb up to the tower can be an adventure in itself, depending on your mode of transportation and the route you take to the top of Telegraph Hill. There are limited parking spaces at the top, but if you’re feeling lazy, there’s always MUNI (bus 39 from Pier 39) or taxis. The hike to the top is hard work, but it is interesting and scenic if you take the Filbert steps or Greenwich steps from the back of Levi’s Plaza on the Embarcadero, passing houses and their shady gardens on streets so steep that they can be accessed only by these stairs (and you just might spot – or at least hear – the parrots of Telegraph Hill). Plus, the extra work involved makes the views from the top that much sweeter.

Pioneer Park covers the top of Telegraph Hill. From the park at the base of Coit Tower, there are already breathtaking views of the Golden Gate Bridge, the bay and the Bay Bridge, the crooked block of Lombard, Alcatraz, and the skyscrapers of downtown San Francisco. A statue of Columbus stands proudly in front of the tower, gazing thoughtfully out at the bay, as a reference to the Italian-American community in the area. 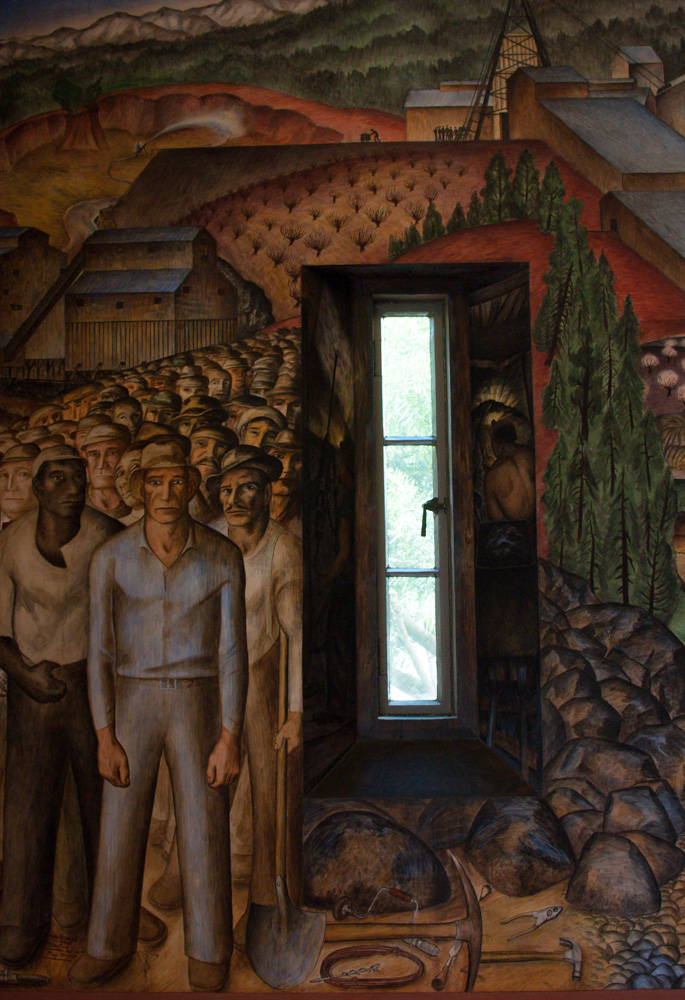 Inside the tower, the walls are covered in frescoes from the Public Works of Art Project, which were made as part of the New Deal during the Great Depression. The murals depict the hard-working farmers, railroad and factory workers, and scenes of the cities, some of them political and considered controversial at the time for portrayals of communist symbols. This area is free to the public, though there are more murals on the second floor that are only able to be viewed on special tours.

The only way to the top of Coit Tower is by elevator, which costs $7 (with discounts for residents, seniors, and youth). The line for the elevator wraps around the tower’s circular base, allowing plenty of time to appreciate the murals before passing through the gift shop.

The elevator to the top takes ages, crammed in with about 8 to 10 people. The elevator operator did his best to make the silence less awkward, joking about the ancient elevator and the possibility of falling to our doom. That elevator ride could have been used to explain a little about the tower – a brief history or some facts, which seemed to be completely lacking from this attraction aside from a small plaque near the entrance.

He could have, for example, explained that Coit Tower was built in 1933 as part of the legacy of San Francisco socialite Lillie Hitchcock Coit, who left a portion of her estate to the city after her death to be used for a beautification project. Lillie Coit was known to help out the volunteer firefighting crews since her teenage years. People claim the tower is meant to resemble a fire hose nozzle, which I guess is true in a general way, but the connection was not intentional.

He also could have told us that the tower stands 210 feet (64 meters) tall, and like the Golden Gate Bridge, features an art deco design, or that there are 11 stories to the top of the elevator. He did tell us that we’d have to walk the final two flights of spiral steps to the observation deck, which is surprisingly on the 13th floor.

It’s a bit anticlimactic once you get up to the top – the views are nice, but not that much better than those you just saw from the base of the tower. The deck is open to the elements, but there are padlocked windows all the way around the lower level. The employee at the top can open two or three at a time to allow for better pictures without glares. He left one open toward the Golden Gate Bridge and one toward Fisherman’s Wharf. 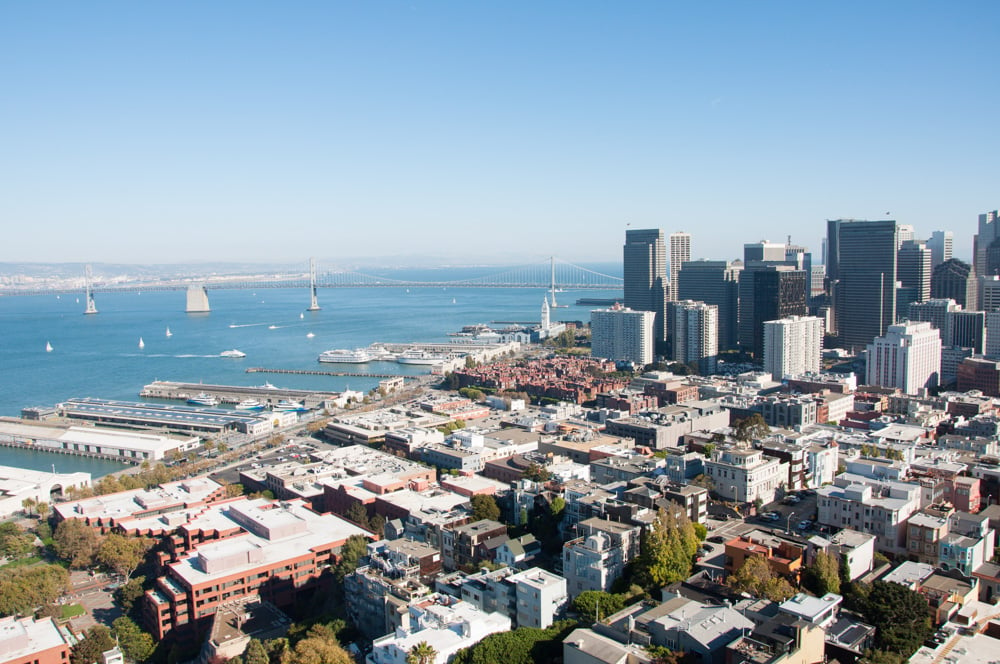 View of downtown and the Bay Bridge from the top

And that’s it. You can spend as long as you’d like up at the top, but it probably won’t be that long before you’re back in line to take the elevator back down. On the way down, the elevator operator took the 55 second ride to challenge the rest of us to hold our breath until we reached the bottom, which sounded a lot easier than it was and made us all realize that the ride down was almost as long as the time we spent up at the top.