Texas County Map shows all the counties (and county seats) in Texas, the second-largest state in the US in terms of area and population. It is spread across a total area of 268,596 sq mi (695,662 sq km). This high-resolution Texas county map shows each county in a different color so that it becomes easier for you to locate. Texas has 254 counties, which is the largest number of counties in a single US state. The Texas County Map also shows the neighboring states, country (Mexico), and the Gulf of Mexico. 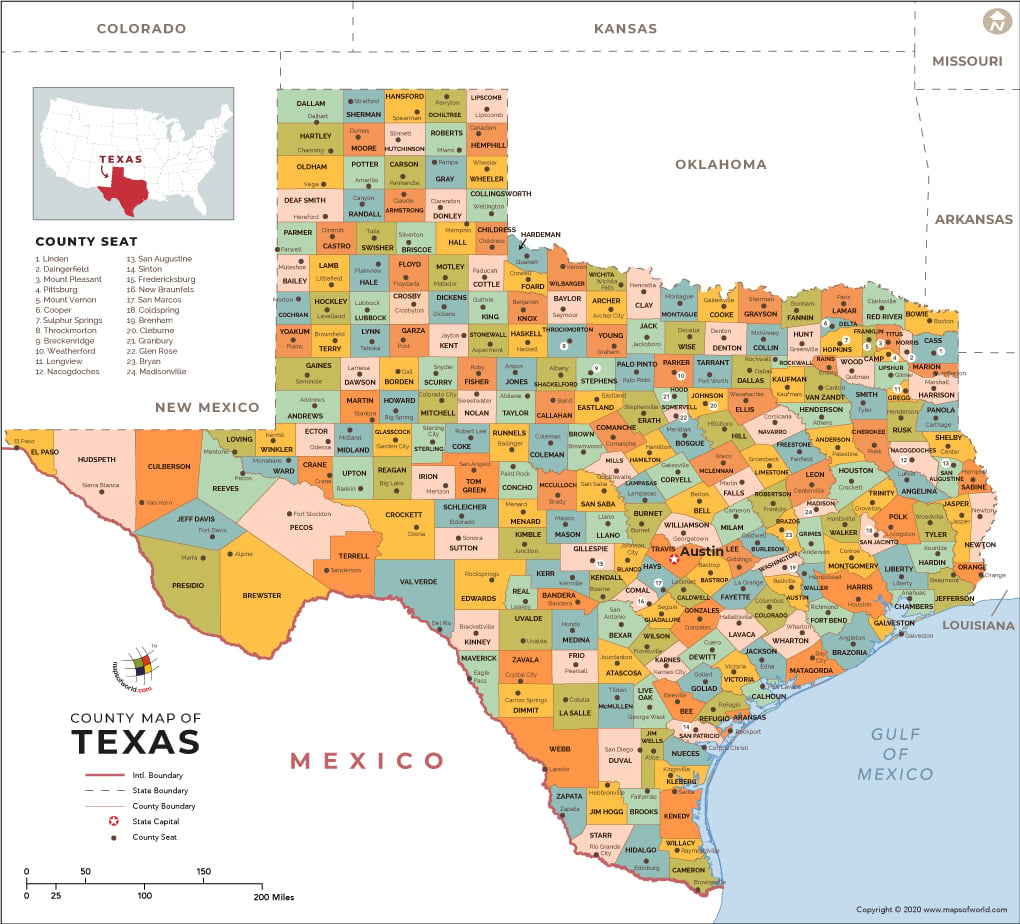 Texas is the second largest state in the United States of America, on the basis of population as well as size, which also offers a wide range of tourist attractions. The state of Texas is well-known as the Lone Star State, signifying the state’s struggle for independence from Mexico, which is also present as a symbol on the flag as well as on the Texas state seal.

Situated in the south-central part of USA, the state of Texas possesses a common international border with the Mexican states of Tamaulipas, Chihuahua, Coahuila, and Nuevo León, along with sharing common borders with the US states of New Mexico in the West, Oklahoma in the North, Louisiana in the East, and Arkansas in the northeast.

The state which covers approximately 268,820 square miles of area is home to more than 26 million people of the world. The state of Texas is sub-divided in as many as 254 counties, and into several geographic regions, ranging from landscapes to beaches, to canyons and hills, to rugged hills and rolling plains, to lakes and rivers, to desert and mountains. Texas offers a complete package for every type of traveler in the state. Some of the more prominent counties of the state are Austin County, Bexar County, Dallas County, El Paso County, Houston County, Orange County, Travis County, and Washington County, among many others. The largest city in the state is Houston (fourth largest in US) and the state capital is Austin. Other major cities include San Antonio, Dallas, Fort-Worth and El Paso.

Having talked of the geography of this enormous state, let’s have a look at some of the major counties and main tourist attractions.