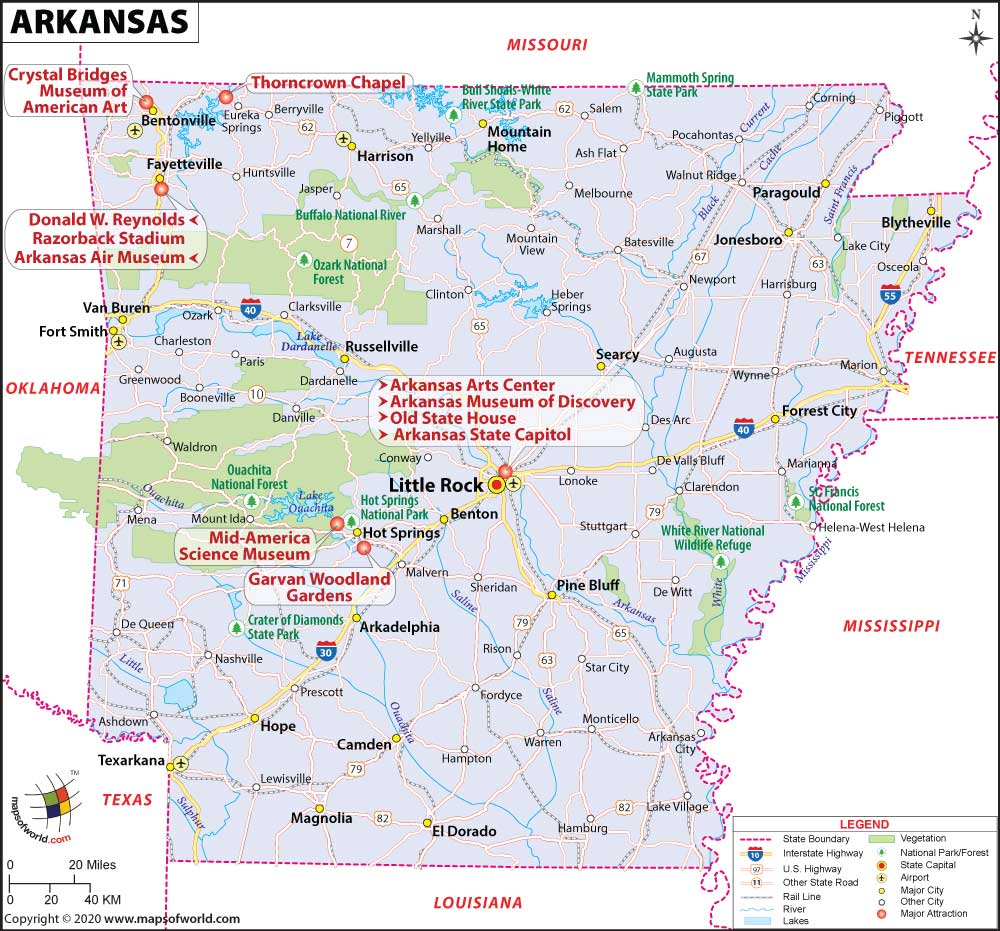 The state of Arkansas is located in the Southeastern United States. Nicknamed “The Natural State,” it is the 29th largest state by area and the 33rd most populous state in the country. Little Rock is the state capital and the largest city. There are 75 counties in Arkansas.

There is a total of 75 counties in Arkansas. The biggest county in Arkansas is Union County and the smallest is Lafayette County. Check this Arkansas County Map which locates all the counties of Arkansas on the map.

In the Woodland period, people of Mississippian culture (mound-building Native American civilization) inhabited the region. The Quapaw, Caddo, and Osage were among the indigenous nations that lived in the territory. The Spanish explorer Hernando de Soto was the first European to set foot in 1541. Robert La Salle arrived here in 1681 on his expedition to claim the Mississippi River basin for France. Over the next centuries, there were notable conflicts between European settlers and Native American tribes.

In the year 1803, the United States acquired all of Arkansas’s land in a transaction that is popularly referred to as the Louisiana Purchase. Arkansas joined hands with the Territory of Missouri in the year 1812. In June 1836, Arkansas became the 25th state in the US. It played a key role in the Mexican-American War and the American Civil War. The state is recognized today for being a leader in the production of cotton, soybeans, and rice.

The state comprises a total area of 53,179 square miles. It borders Louisiana to the south, Texas to the southwest, Missouri to the north, Mississippi and Tennessee to the east, and Oklahoma to the west. Its diverse geography ranges from the Ozark and the Ouachita Mountains − which make up the Interior Highlands − to the densely forested land in the south known as the Arkansas Timberlands and to the eastern lowlands along the Mississippi River which forms the state’s eastern boundary.

Mount Magazine in the Ouachita Mountains is the highest point in Arkansas at 2,753 feet (839 m). The lowest point of the state is the Ouachita River located at 55 feet above sea level. The major rivers of the state are the Arkansas River and Mississippi River and the major lakes are Lake Ouachita and Bull Shoals Lake. The land of Arkansas can be categorized into five main regions; Arkansas Valley, Ozark Plateau, Mississippi Alluvial Plain, Ouachita Mountains, and the West Gulf Coastal Plain. The highlands constitute the northern & western parts of the state whereas the lowlands comprise of eastern & southern portions.

Aptly nicknamed “The Natural State,” Arkansas’ natural richness is one of a kind. The Clinton Presidential Center houses a library & museum and also hosts local events throughout the year. Crystal Bridges Museum of American Art exhibits collections ranging from the Colonial era to the contemporary period. Magic Springs and Crystal Falls entertain visitors of all ages with water slides, roller coasters, and summer concerts. Old State House in Little Rock and Thorncrown Chapel in Eureka Springs are among the iconic landmarks in the state.