Was Texas Ever an Independent Country? - Answers 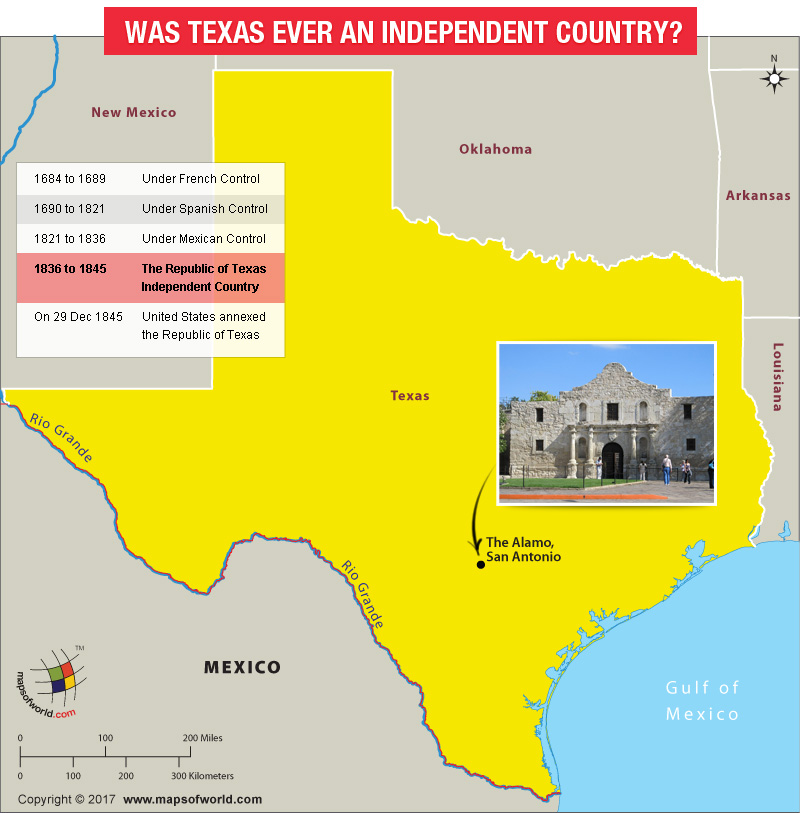 From March 2, 1836, to February 19, 1845, The Republic of Texas existed as an independent country having its own flag, seal, and currency. It had a Congress and the country was headed by a President. The Republic of Texas had official recognition as a country from the United States, Great Britain, France and several other countries, many of whose ambassadors were represented here.

The boundaries of the Republic of Texas had parts of New Mexico, Kansas, Oklahoma, Colorado and Wyoming, as we know today.

How the Republic of Texas came about?

The Mexican government invited settlers from outside to settle in Texas and many moved in to make Texas their home. Soon, disillusionment with the Mexican government brought the native Hispanic Tejano people closer to the white settlers and they rebelled against the Mexican government with frequent battles being fought.
The Texas Revolution culminated in the famous Battle at the Alamo in San Antonio, which saw 189 brave Texians, as they called themselves back then, hold out for seven days against a 4,000 strong Mexican army. Around 1,500 Mexican attackers were killed or injured before they overran the Alamo. All 189 Texians died defending the Alamo.

A month later, on April 21, 1836, the Texian army under command of General Sam Houston, took on the Mexican forces in the historic but brief Battle of San Jacinto that lasted just 18 minutes and was to be the war that won Texas its independence.

It is interesting to note that the State of Texas holds the right to secede from the United States at any time should it so wish.

The State of Texas today